In parts of the United States and Canada it's a common practice to mix 2-3 guard donkeys with goats and sheep, or cattle in wilder terrain.  An alert jenny or gelding will stomp a number of mid-size predators; but of things donkeys hate most in life, they really dislike canids.  How herds are managed in wild modern environments may help illuminate how the earliest ruminant herds were managed in a wilder world.

The last post on the early outlier horses in the Czech Republic brings up a question about how horses and donkeys came to be domesticated.  Some archaeologists and zoologists have reckoned that domestication of horses began as the exploitation of horses as a food source.

This is not a very persuasive hypothesis because the improvements made in horses and donkeys of the early millennia do not suggest features for milk and meat production.  But the rationale for corralling horses doesn't make sense either.  Were they captured and bred because of their dwindling numbers?  Why only horses then?  That just seems like a difficult and odd effort when other animals offer less resistance and greater returns.

The fact that donkeys and horses were domesticated in at least two very different regions seems to throw the novelty aspect out the window.  In other words, equids seem to have been useful in different climatic regions by people who likely herded cattle as well.

Many members of equidae and bovidae (which also includes sheep and goats) are naturally tolerant of each other.  On the Serengeti where the two often herd together, it's a sort of evolutionary symbiosis where zebras will stomp predators from the canidae family, unintentionally protecting wildebeest calves.  Wildebeests have sacrificial numbers that allow zebra to run from larger threats like lions.  Certainly not all bovids and equids behave like this in the wild, but even a scrub-land browser like the donkey have no problem bonding with sheep and goats.

As the first goat-ropers began expanding from the Zargos with sheep and goats, predation would have been one of their biggest concerns, not just from wolves and cougars, but also from roaming packs of wild dogs.  A thin argument has been made on the basis of mtdna that ass domestication occurred in Northeast Africa [link]; regardless if this is correct or not, it's curious that donkeys appear within the timeframe goats first appear in Egypt and, if indeed donkey domestication did occur the Nile region, then it surely came within the cultural frame of goat herding.

In a place such as the North Pontic-Caspian Steppe, it's possible that from the beginning wild horses were gravitating toward domestic cattle herds on the landscape.  In other words, the natural disposition and social structure of horses meant that they were hovering in domestic cattle pastures just as they would around aurochs millennia before and that their presence was tolerated (or actually preferred) by cattle owners.  This doesn't mean horses are fond of cattle, but the constant howling in the night of the Pontic Steppe might have been a powerful motivator to stand a little closer to a bunch of slow and retarded cattle.


It's generally an established fact that the wildebeest masses are led by the zebras.  Theoretically, the Great Migration on the Serengeti would be led by pockets of alpha mares and their harems followed by retarded wildebeests.  This is certainly true for a jenny followed by goats or sheep.  Moving a large herd of domestic cattle may have been accomplished by moving a dominant and loyal mare.  I

So is the domestication of the horse tied to cattle and donkeys to goats?  In the Lindneux painting above, the cowboy sits on his horse as cattle cross a river.  If humans were totally removed from the painting, would we still see an image similar to this in the Pleistocene Near East? 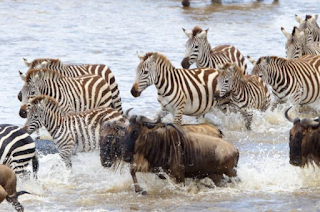 Posted by bellbeakerblogger at 11:28 PM