This study by Salanova, Prieto, Clop, Convertini, Lantes and Martinez looks at the elemental composition of 1,129 pottery artifacts and inlay paste from the area seen below.


Conclusions from the paper:


"The results of the research allow us to confirm and further refine a model of the circulation mechanisms of Bell Beakers that was published several years ago...  This model proposed three types of pottery circulation to explain the wide distribution of this style: the circulation of pots when techniques, style and raw materials are locally unknown, despite having raw materials locally available; and the circulation of ideas when the Bell Beaker style has obviously influenced the potters, who carried on with their own local traditions."

"The circulation of pots, despite being a rare occurrence, has been well and truly confirmed.  Here, we can distinguish between the displacement of pots for special occasions and the movement of one part of the domestic vessels with the mobility of groups."

"The circulation of potters is also confirmed.  The three Dutch AOO beakers from northern France with their local raw materials clearly refer to the foreign potters who produced outside their traditional sphere... The exchange network for flint daggers that developed during the third millennium BC from Grand-Pressigny (central France) to the Netherlands and Germany could explain the presence of these foreign potters..." 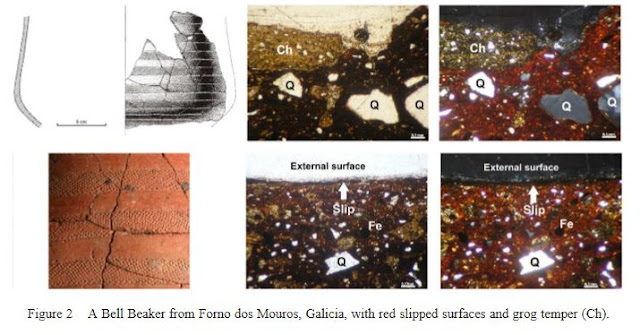 "The combination of XRD [X-ray powder defraction] and TSPA [Thin Section Petrographic Analysis] made it possible to verify their complementarity, as some minerals, such as chorite, talc and kaolinite, were only detected by XRD.  The use of TS-PA alone is unlikely to lead to the detection of these phyllosilicates, due to their small grain size.  In contrast, other inclusions such as rock fragments (granite, mica schists), plant remains, charcoal and grog could only be detected by TS-PA.  Due to the complementary technique of TS-PA, it was also possible to verify the intentional addition of tempers made of quartz, mica and rounded iron nodules (Garcia-Heras et al. 2009)"

"Variability in clay processing recipes for pottery is still at a descriptive stage as far as prehistoric contexts are concerned. This paper intends to go beyond our traditional limits, based on the best-documented case for prehistory, the Bell Beaker style, which spread throughout the whole of Europe during the third millennium bc. The thousands of archaeometric analyses that have been carried out on the main concentrations from France, Spain and Portugal are taken into account in order to reconstruct the circulation mechanisms of the pottery and the social organization of the communities who used it."

Posted by bellbeakerblogger at 9:35 AM No comments:

Email ThisBlogThis!Share to TwitterShare to FacebookShare to Pinterest
Labels: Ceramics

There is this belief in archaeology that certain prehistoric peoples just "kind of picked up metallurgy" through an exchange of ideas.  The reality is that mining, reduction and smithing require knowledge and big boy skills, not something gained through osmosis.
You could also ask the guy with fourteen kids how he anneals or hardens certain items, so you could like 'do that too' and take food off his table.  That's sixties archeology, everyone's a bro.

Others, like Gordon Childe, tried to be a little more realistic initially and concede that some population movement is necessary and imagine Beakers solely as traveling smiths who do good needs for the unbathed country souls who are happy for their skills, there, in the remote and cloudy island that no one has ever heard of off the coast of Northern Britain.

A guy standing on a island with a bone in his nose sees and airplane flying overhead and being inspired, immediately begins processing bauxite and tapping rubber trees.  These arguments are repeated with regards to many of the technological changes in the third millennium, lithic production, pottery, whatever.  It kind of reminds me of this.  Funny.

Paul Simon - Desert Island Christmas from Simon and Garfunkel News on Vimeo.
Posted by bellbeakerblogger at 11:27 AM 6 comments:

It features the grave of a child's grave from a ring ditch and his Veluwe Klokbeker and bowl.  Other beakers, lithics and artifacts from the area are on display as well.
The likely boy was buried in a flat grave although little of him remains due to the acidic soil conditions of Holland.

Posted by bellbeakerblogger at 12:02 AM 2 comments:


Here's an article from the Daily Mail UK on the discovery of another Stonehenge-type calendar in Southwestern England.

All of the stones were intentionally toppled around 2,000 B.C. and the site may have been built at the beginning of the Early Bronze Age. It would seem that regardless of who built it or who destroyed it, that it's lifespan covered most of the time in which Beakers were active. 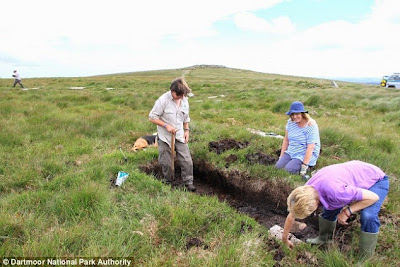 Southwest Britain became a central player in the exploitation of metal deposits in the Early Bronze Age. The moors may have made an ideal place for surface mining. You'll notice that the current arc forms an East-West orientation. 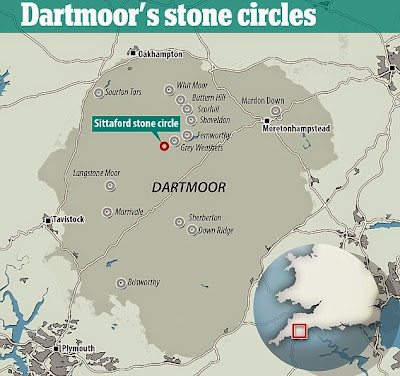 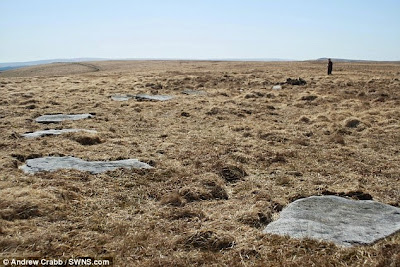 You can that someone tipped all the stones over, deliberately in the same direction, around 2,000 B.C.
A very convenient time frame in British prehistory. Maybe someone was pissed off, or maybe "alcohol was a factor". Another possibility is that the religious views were changing a bit at this time. 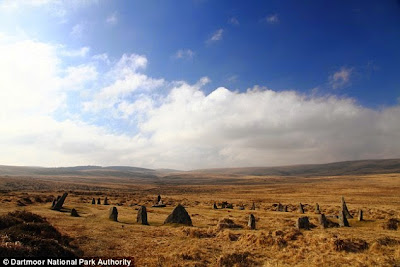 Posted by bellbeakerblogger at 7:14 PM No comments:

Here's some nice case photos from the Ingolstadt Museum by Kurt Scheuerer.

I've decided to start blogging on museum exhibitions featuring Bell Beaker Culture artifacts from around Europe.  Most are in small local museums so it might be helpful to have a reference if you live in Europe or plan on traveling.

Here you see some of the Central European boar's tusk handiwork in Beaker Room #2.


Posted by bellbeakerblogger at 9:34 AM 2 comments:


European textile tools and resources change rapidly with the progress of the Beakers and Battle Axe folk.  In fact, for all the talk about daggers, copper and drinking cups, the enduring impression of that time in Western Europe may have been Beaker clothing, especially that of the warrior elite.

Regarding the changes in the Sardinian textile industry, Luca Lai, 2008 says "...the increase in the symbolic importance of decorated textiles suggested for the 3rd millennium has also been connected to the Bell Beaker decorative motifs."  One component of that decorative dress may have been tablet borders, belts and straps.


You can see that the banding of Bell Beaker pottery looks very similar to the simpler tablet weaves.  The fact that so much of the Beaker pottery is broken up into bordered and equally-widthed geometric zones would seem to support the projection of tablet weave iconography on pottery.  In fact, bell beaker zoned bands could reflect the actual life size of tablet weaves given their general sizes. 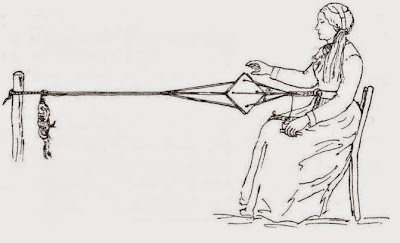 It's difficult to identify tablet weaving in the archaeological record.  The tablets and the weaves are perishable, so that leaves only a few avenues to research.  Using comparative analysis across distance and the very thin finds in the Hallstatt mines or the Tarim Basin, several authors have attempted to locate its origin in the Southern Caucasus or Western Iran in the 3rd or 4th millennium.

It is noteworthy that the hashed, chevron, diagonal, diamond and zig-zag motifs follow the order of complexity in tablet weaving, like motifs which adorn the pottery in Northwestern Iran beginning in the Pottery Neolithic.


See also:
Prehistoric Textiles: The Development of Cloth in the Neolithic and Bronze Age E.J.W. Barber [Link]
Posted by bellbeakerblogger at 1:17 PM No comments:

This post is updated with graphic and links now that I've time-warped back to the modern era.

Katherine Gromer covers textiles from prehistoric Central Europe.  One thing to keep in mind is that textiles very rarely survive in any form, so the first appearance of any technique will probably be very late and the estimates will be conservative. 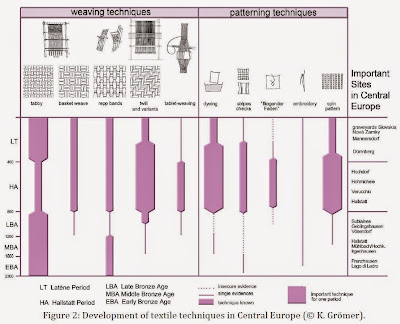 It's probably difficult to put hard and fast dates to any technique, but I'd guess twills followed wooly sheep into Europe as part of late Near Eastern population movements.  Genomic analysis of ancient domestic European sheep will probably offer the best answer for length and coloration available at certain dates.

Card weaving is another story, but I think it may have been present in Late Neolithic Iberia based on depictions of stelae tunic belts and a broken item from Perdigoes that could be half a tablet (card) that has been otherwise interpreted as a loom weight.  I'll write more on this with some examples and graphics.
It's not impossible that some of the zoned bands on Beaker pottery are schematic of card weaves (usually narrow like hippie guitar straps or the borders on hobbit clothes). The simpler diamond, triangle, zigzags and bordered-hashes might have alternated on zoned beaker pottery with very important plant schematics (probably for gruits: acacia, henbane and hemp) just guessing..
You'll notice that one of the most represented items of Late Neolithic iconography are men wearing elaborate patterned and colorful tunics.


Abstract
For over a millennium, the site of Hallstatt, located in the Austrian Alps, was a meeting point between north and south, east and west, serving as a melting pot of new ideas and innovations. About 300 textile units (more than 700 single fragments) from Bronze and Iron Ages are known from the prehistoric salt mines, dating from 1500-300 BC. They display a wide range of textile techniques and provide insight in different aspects of textile craft. Their outstanding preservation allows us to investigate many crucial steps in the chaîne opératoire of textile production. The 2nd millennium BC is a time, when a lot of innovations in textile craft can be recognized, and Hallstatt offers some key finds. Recently, wool measurements were carried out, sampling not only Bronze and Iron Age textiles from the Hallstatt salt mines, but also skins found there. This enables us to study the development of sheep wool and its preparation techniques over a long period of time. This new data demonstrates that outstanding Bronze Age textiles also have specialized wool, although we do not know at this point if these textiles are imports or were produced locally. The Hallstatt finds are displaying novelties from the perspective of textile craft, such as earliest twills, dyeing, specific sewing techniques and the patterned tablet weave known in Europe so far. The occurrence of these techniques in the Bronze Age Hallstatt seems to indicate that it was an important transfer site for textile innovations. Bronze Age textile art clearly represents an invention phase, while these techniques developed and came to full use in the Iron Age, when we see them fully integrated into society. They influenced the social organisation, ideology and economy, especially of the representational culture of the higher strata during the Iron Age.
Posted by bellbeakerblogger at 1:12 PM 1 comment: