This is page 2 of "Death by Combat" by Needham et al, 2017.
Having now read the paper in its entirety, some interesting questions...


We might carefully assume that the dagger buried with Racton Man (above) was on his person when he died, Racton apparently having lost a dagger fight.  If that were true, it'd be interesting that the victor and his company did not take Racton's dagger having the power to do so, an item that would be very highly coveted for the time.  This potentially tells us about the nature of the encounter.

In his book "Feud in the Icelandic Saga", Jesse Byock (1984) makes a case that certain fundamentals of conflict resolution are woven into the themes of Icelandic (and by extension, IE) sagas.  Every story has woven within it a blood feud, a holmgang or einvigi.

Needham et al seem to view this death in that light, as an einvigi (single combat dual) and they further propose that this was because of a leadership contest.  That may be the case, but it could be as something stupid as a foul remark and a challenge to dual.  Either way, it is reasonable to think that this fight was mano-to-mano.

Like most Beakers, Racton Man was buried in a wooden enclosure or container with his head resting on a pillow.  When his body decomposed, his head rolled off the pillow giving its position in the grave.  There was also no perceivable rodent activity, so it would seem the container was fairly well constructed.

In addition to this, it can't be ruled out that he was also beheaded at death.  The attacker very forcefully made a succession of blows, any of which could have caused death.

And finally, to add something concerning high status dagger burials...

"It is intriguing that among these injuries, a high proportion are arm injuries: for example, a forearm parry fracture at Chilbolton, Hampshire; a healed upper arm fracture at Liffs Low (Beaker burial), Derbyshire; healed forearm fractures at Pyecombe, East Sussex, Barnack, Cambridgeshire, and Fordington Farm, Dorset; an extensive wound to the left wrist at Callis Wold 23, East Yorkshire, which the recipient survived; and a possible upper arm injury at Tallington, Lincolnshire. At Court Hill, Somerset, a left humerus chopped right through was interpreted as the probable cause of death, and a burial at Amesbury, Wiltshire, had suffered the same fate, but also lacked its right arm, skull and mandible. Burial 11 at Staxton Beacon, East Yorkshire, had a major weapon injury to the left shoulder.103 Taken together, these begin to look significant, particularly since leg injuries seem to be negligible by comparison. There are also several skull injuries of varied kinds. All but one of the skeletons is sexed and all are males. Thorpe saw such injuries as evidence that recipients were ‘killed in the course of small-scale conflicts, whose bravery was then recognised by a prestigious burial’.104 It may now be possible to venture more on the particular social context of some conflicts."


With all the engraved daggers, what went on at Stonehenge and Mont Bego anyway?
And hat tip to Andrew, see part 1
Posted by bellbeakerblogger at 6:06 PM 5 comments:
Email ThisBlogThis!Share to TwitterShare to FacebookShare to Pinterest

Beakerblog found the mother lode of all flint mothers this week.  Some of the nodules are huge, Danish dagger worthy.  This particular lot lode is weirdly like 90% flint, different colors, different qualities.  Not exaggerating.  There is literally several TONS (tons!) of it is this particular parking lot. 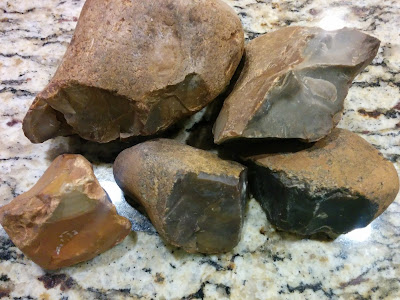 The best place to find flint is actually in the parking lots of offices and businesses that have decorative rock beds.  A lot of time they truck in river stone.  The best way to know for sure you've got flint is to strike it and it'll smell like a cigarette lighter.

Always ask permission to hunt for rocks, very especially on private lands, and probably the same for doctor's offices, banks and small businesses.  My advice for the buy-n-large box stores is, well, that's for another blog.
Posted by bellbeakerblogger at 1:56 PM 2 comments:
Email ThisBlogThis!Share to TwitterShare to FacebookShare to Pinterest
Newer Posts Older Posts Home
Subscribe to: Posts (Atom)