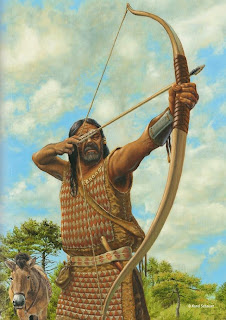 Janusz Czebreszuk described the Beaker Phenomenon in a book entitled "Similar but Different":


1.  Bell Beaker spread over western and central Europe
(in the history of the Continent a structure of a comparable size has been only the contemporary European Union).


2.  The full history of Bell Beaker covers the period of almost 1000 years
(although in individual regions their history was always shorter).


3.  Bell Beaker had their internal dynamics; they emerged in southwestern Europe, spread east and survived the longest on the North European Plain and the British Isles.


4.  The central element of Bell Beaker was a set of objects related to the drinking of special beverages and to war and hunting.


5.  The objects were always carefully made, hence they had a significant cultural value for their users; they are most often found in graves where a single person was interred lying on his/her side in a flexed position.


6.  The general typological evolution of Bell Beaker goods is similar in all regions; the phenomenon, originally quite uniform (Maritime beakers), diversified regionally with time.


7.  Bell Beaker are closely related to metallurgy (chiefly of copper and gold); they developed the first stylistic of metal goods in the history of the continent, which spread across the vast expanses of prehistoric Europe and was later continued by other stylistics of the Bronze Age.


8.  Bell Beaker were highly mobile culturally and easily moved from one region to another, however, they concentrated in old settlement centers whose roots usually dated back to the Early Neolithic.


9.  Mixed cultural structures with groups traditionally living in individual regions developed rapidly; with the appearance of Bell Beaker in a given region, no radical break in the process of cultural transformations is observed.


10.  Upon the appearance of Bell Beaker in an area, a period of civilization prosperity began, which continued, after their decline, into the Early Bronze Age.