You'll notice one of the skeletons is wearing a Cubbies jersey.  Probably died of drinking and being generally foolish; I didn't notice if he was holding a koozie.  (Krefter, I think you can appreciate) 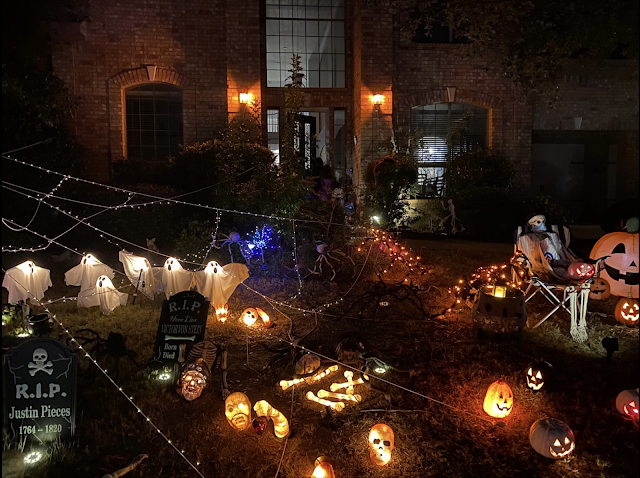 One of the houses we trick-o-treated.  There was a few good ones but COVID kind of was like a wet rag this year.  Luckily, it was a full-fanged moon and we met our quota.

And below, a few jack-o-lanterns in the drive of the Haunted Beaker Manor.  Sorry, did even think to put some candles in bell beakers and put those in the driveway.  Would have been a nice touch.  Next year. 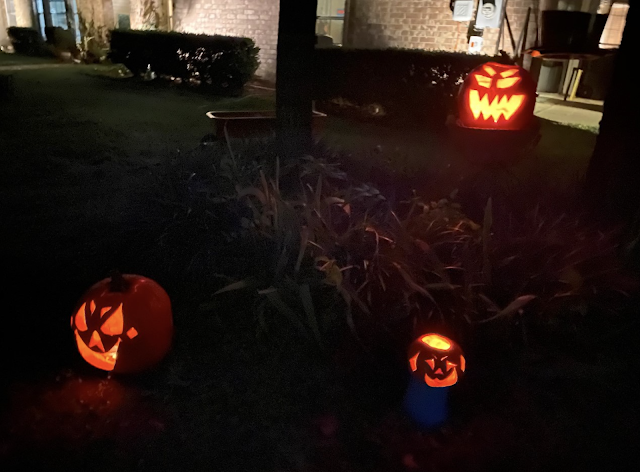 Posted by bellbeakerblogger at 1:46 AM 2 comments:
Email ThisBlogThis!Share to TwitterShare to FacebookShare to Pinterest

This has been the subject of speculation for a long time, but now there is a peer-reviewed paper confirming the last rulers of the 18th Dynasty belonged to paternal haplogroup R1b.

Gad et al. seem to suggest the reason for the delay publicizing results has been due to controversy surrounding contamination.  Seeing how remains are moved by a bunch of sweaty guys raining over a mummy being moved coffin to gurney, it's easy to understand the reservations.

I'm going to guess that subsequent papers are queued up with more 17th and 18th Dynasty profiles.  Just guessing.

As we've seen with the two papers on the German Beaker farmstead genealogies, there is potential to really expand the knowledge on relationships spanning hundreds of years in Egypt.  New questions will emerge, such as, what was driving the chaos of the whole 2nd Intermediate Period, what role did mercenaries play in forming new social classes, who were the barbarians invading?

I will assume for now (barring cuckoldry somewhere along the way) that Ahmose I was also R1b of the Atlantic type.  But then the question, how many generations into the 17th dynasty?

For some reason I had it imprinted on my mind that Tut had a Sub-Saharan mtdna profile, like L-something.  Not the case here.  He's a Near Eastern K-boy.  That's unexpected, at least for me.

Posted by bellbeakerblogger at 2:04 AM 36 comments:
Email ThisBlogThis!Share to TwitterShare to FacebookShare to Pinterest

This slightly built woman named Takabuti has yielded an H4a1 result at around 90% certainty.

Unlikely most Egyptian women, her reddish-auburn hair was not shaved during the preparations, instead it was styled and curled.  I'll assume this is due to the religious significance of red hair in ancient Egypt and the broader Near East.  (things like dwarfism, gigantism, blue eyes, twins seemed to attract bug-eyed people holding snakes)

You will remember that "Ginger" from outside Heliopolis in a pre-dynastic setting was also a redhead.  So the question you may have, and I have had for a long time, is when exactly did these lineages and phenotypes enter Southern Egypt.  It may be a mistake to believe that this and other atypical lineages were only recently introduced in Bronze Age. 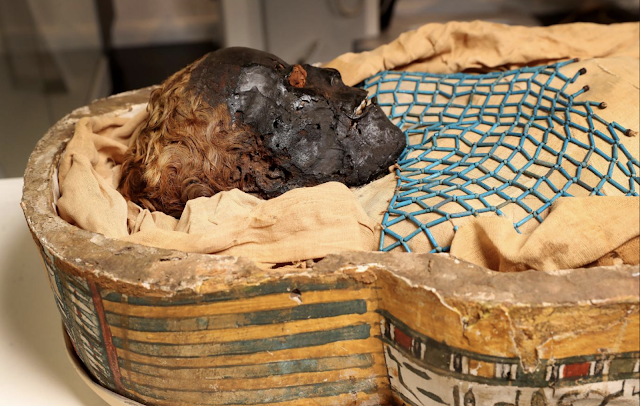 While Tutakhamen's paternal lineage is more plausibly due to (*update *what the hell was I thinking?) potential mercenary lineage in the army, that may not necessarily be the case.  It's quite possible, as I've suspected since the beginning of this blog, that the mid-4th millennium circum-Pontic region was spinning immigrants out in all directions, including the North Africa and the entire Middle East.  This is not to say that these were PIE, most certainly not, probably Upper Mesopotamians here.  (apparently you can not utter these words in a university without getting kicked in the balls and beaten like a brand new chimpanzee)

This reminds me of the original Rostaluu paper concerning the origin of H mtdna sequences.  Probably worth a review.  We're not talking about a lot of people in relation to the population density

*I teased this back some time ago.  I think the Tutankhamun paternal lineage probably extends through the entire 18th dynasty at least past Ahmose I.  The question I want to know is how far back it went into the 17th.