Bernard has a summary of this paper by Tassi et al, 2017 called "Genome Diversity in the Neolithic Globular Amphorae and the spread of the Indo-European languages".

These particular genomes come from a megalithic grave in Northeastern Poland.  One thing to keep in mind is that very little is known about the GAC, and secondly what is known is that there is some regional diversity in economy and burial practices.  A single individual in this group appears to have some amount of steppe-related DNA, which is only surprising to those who might have expected more.

The GAC individuals, minus the one, are notable for having elevated HG ancestry of similar proportions to Middle Neolithic Sweden, Hungary and Iberia Chalcolithic.  But they don't not seem to share a composition similar to local populations.

In fact, if GAC migrated from anywhere, it seems that they migrated from the West to the East including some analysis of rare ancestry, but certainly their maternal profiles.


"The GAC samples are clearly separated from those populations, and show instead a closer relationship with the western, Late Neolithic, Bell Beaker population (electronic supplementary material, figure S12).

The median-joining network [34] (electronic supplemen- tary material, figure S13) shows GAC sequences falling in haplogroups H, J, K, U and W. The relationships between the GAC and other populations of the same time period are evi- dent (electronic supplementary material, figure S14, inset d), especially with the population from Sweden and, although less so, with the Baalberge population from Germany."

Violet Volken from Northern France?  (Genetically speaking; the earliest GAC dates are from Poland and have steppe cultural influences)  Clearly they are not derived from the steppe region as once believed by Gimbutas and many others.  Interestingly though, these very 'Western' looking people do end up in the Northern Pontic Steppe, or at least their influences do.  This would presumably mean that GAC was intrusive.

Another thing that's puzzling is their highly mobile economy.  Maybe another time.


"However, in this case, the substantial contribution of males should at least result in some degree of similarity between GAC and Yamnaya at the nuclear level, which did not emerge in this study. In both cases, a trans- mission of cultural traits from the Pontic steppes to the GAC, and later further West, is conceivable and not ruled out by our data; further archaeological work, including studies of other GAC sites, may shed additional light on this."

If I were to assume they had y-chromosomal DNA of these GAC individuals, and they are looking at disparity between nuclear DNA and paternal haplogroups of Yamnaya and GAC, then what are they looking at?
Posted by bellbeakerblogger at 10:36 AM 13 comments:
Email ThisBlogThis!Share to TwitterShare to FacebookShare to Pinterest

This paper includes the HVS-1 profiles of nearly three hundred ancient Iberians.  Rather than summarize the paper, let me ignore everything else and zero in on a single point.  The enigma of H1 and H3.

Multiple streams of evidence are starting to illuminate something that happened in the MN, possibly moving out of France.  From the Paris Basin to Paris Street, to barbarian Blatterhohleans and belligerent Baalbergers we see something that is curiously steeped in WHG-rich ancestry, high haplogroup H frequency, and the curious presence of R1b.  I call them the Violet Volken after the Fregel et al, 2017 K=8.

Before delving into this study, let's question the basis of a particular narrative.  It is that the rebound of WHG-related ancestry in the Middle Neolithic is the result of a slow process by which hunter communities were civilized and absorbed into the general farming population.  Does that even work mathematically based on population estimates?

But at gory Gougenheim (Beau et al, 2017) the maternal profiles don't support a situation in which shy hunters slowly grafted into the settled mainstream.  Instead, like Blatterhohle Cave we see what amounts to a 'deeply segregated society' based on the data available so far.  It's pretty clear who ruled the school in Gougenheim.  What if the spike in HG-related ancestry isn't local, shy hunters?  Let me answer that for you, it's probably not.

This study possibly adds more full to that fire.  Maybe in the strictest terms Olalde et al, 2017 is right that Maritime Iberian Beakers contributed little ancestry to Continental Beakers, but it may be more complex than that.  And this offers an intriguing thread to pull:

Hervella et al, 2015 made a nearly identical comment concerning the Neolithic Balkans.  I'll revisit the Hervella "H" hypothesis in a moment.
It's unlikely that the high rate of H1 and H3 can be explained by a founder effect of the Danube farmers.  Just not enough time for a patriocally, high female-mobility-oriented culture to pile up only H1's in some remote pocket of Southern France.  That reasonably leaves the Cardial/epi-Cardial/Impressa or whatever tradition which can explain the Mediterranean littorals; or alternatively, as Hervella et al suggested, a third Neolithic expansion (more on this).


"The largest proportion of the H individuals belongs to the subhaplogroup H1 (65.1%), and the second largest group is subhaplogroup H3 (14%)... H3 is detected in Chalcolithic individuals from central, southeast and southwest Iberia. H1 is observed in each period and region, but more frequently in the Chalcolithic and Early Bronze Age than in the Neolithic. .... However it becomes apparent from our results that the H diversity in prehistoric Iberia is different from the H diversity of Central Europe, and more similar to the Neolithic populations in France.  Notably, common Central European subhaplogroups H5 and H7 have not yet been observed in Southwest Europe."

The below hints at what I've already suspected, that a large portion of the Steppe-related ancestry in Beakers of the North European Plain is owed to the Corded Ware Culture that it subsumed, probably from a combination of wife-buying and destruction.


"Interestingly, we also do not find evidence for influx in the East to West direction, as none of the investigated Chalcolithic individuals show ‘steppe ancestry’, which seen in contemporaneous Central European Corded Ware and Bell Beaker groups, suggesting that eastern influxes did not reach the Iberian Peninsula until later periods."

What this means is that the rapid rise of haplogroup H in Iberia is not connected to Steppe-related ancestry, at least before the regular Bronze Age.  This is an important and subtle point.  It means that Iberia was experiencing a surge-of-something that was also affecting other parts of Europe hundreds of years before the Beaker phenomenon.

Finally to the Hervella "H" Hypothesis which is an attempt to explain the extreme rise in the haplogroup H right before the Late Neolithic.  Brotherton et al, 2013 postulated that this rise reasonably came from Southwest Europe into Central Europe with the Bell Beaker Culture.  But the Hervella team found that explanation not suitable after examining a similar mito-phenomenon in the much earlier Neolithic and Metal Age of the Balkan Peninsula.  Clearly there were farmer-like maternal profiles and then the exploding H-people.  This is what Hervella wrote in response to Brotherton in 2015:

"...none of the models studied to date have taken into consideration another possible and obvious explanation, namely a new wave of Neolithic migration into Europe through the ‘traditional route’ of the Balkan Peninsula. This new wave of Neolithic migrations are represented by Vinča and Dudeşti cultures (5500–5000 BC), that trace their origin in North-West Anatolia on the basis of ceramics features [28]. The Boian, Zau and Gumelniţa cultures from Middle-Late Neolithic (M_NEO) from Romania are the direct continuation of this cultural complex; the M_NEO group from Romania displayed differences in haplotype (S5 Fig) and haplogroup distributions (S4 Fig) with the Middle Neolithic from Central Europe."

That would put a 3rd Neolithic behind the Iron Gates, in the Wallachian Plains cultures that also gave rise to the Boian encrusters, who are nearly contemporary with cultural changes in the North of France and Germany around 4300.

What if that is the source of excess WHG in the Middle Neolithic in the West of Europe?


Posted by bellbeakerblogger at 9:35 PM 19 comments:
Email ThisBlogThis!Share to TwitterShare to FacebookShare to Pinterest 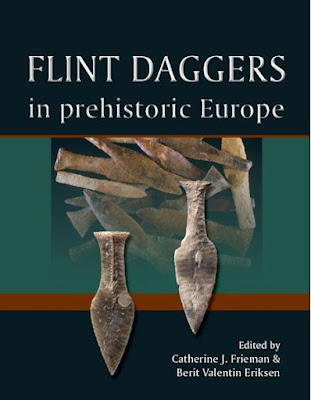 Here's a summary of the chapters.

A lot of assumptions are baked-in to the interpretation of stone daggers.  One of the more irritating is the view that stone daggers were seen as inferior, imitative or less desirable than copper daggers.

There is some discussion in this work that the imitativeness was reciprocating and I'm interested to see if there is any evidence to suggest that one material was more desirable than the other aside from imitation.

If you look at the decline of blacksmithing as an economics problem, was it because of less demand for wrought iron works?  Future researchers may conclude that wrought iron gates and fencing were replaced by extruded steel which proves that Chinese steel was highly valued for its strength and uniformity.
Posted by bellbeakerblogger at 7:52 PM 1 comment:
Email ThisBlogThis!Share to TwitterShare to FacebookShare to Pinterest

This particular ear plug, or waisted stud, was found near the early Bronze Age burial mounds on the north bank of the Witham.  It's a stray find that may have been unearthed during a previous excavation and mishandled.

Jet ear plugs have so far only been found with women in Britain.  I believe most anything jet in the EBA is usually, or only, found with women.
It's likely that some men had plugs of a more perishable material, and certainly not a chicky color.  Otzi and Tutakhamen bookend the periods before and after the Beaker Period, and both of those individuals had stretched earlobes - so it's possible.


Plus, in the Irish Late Bronze Age, these spools become very dramatic and are worn by men.  Given that the material was gold, that makes one wonder if plugs of similar size were worn in the Beaker period but no evidence survives.  Who knows.

I'd imagine that some sort of balance would be sought for a woman wearing jet earrings.  Possibly charcoal eyeliner, facial tattoos or facial art in order to bring it all together.  Looking at Pre-Columbian Indians and the Western Pacific, probably.

Here's a paper by Mary Cahill concerning the ear spools of the British Isles.

"Unspooling the Mystery"
Posted by bellbeakerblogger at 5:38 PM 5 comments:
Email ThisBlogThis!Share to TwitterShare to FacebookShare to Pinterest

There is a spectacular Beaker site uncovered in the Ústí region of the Czech Republic in or near a town called Hrbovice, Ústecký kraj.  From Ustecky Denik

The Bohemian Bowmen are outfitted with the full warrior gear including bow-shaped pendants on the chests, quivers (one having 9 arrows), spears and at least one wrist guard.  The translation is somewhat garbled, but it appears a boat-shaped Beaker house is also discovered here with parallels to those in Hungary.

If I understand correctly, they have about thirteen graves from the Beaker Culture thus far. 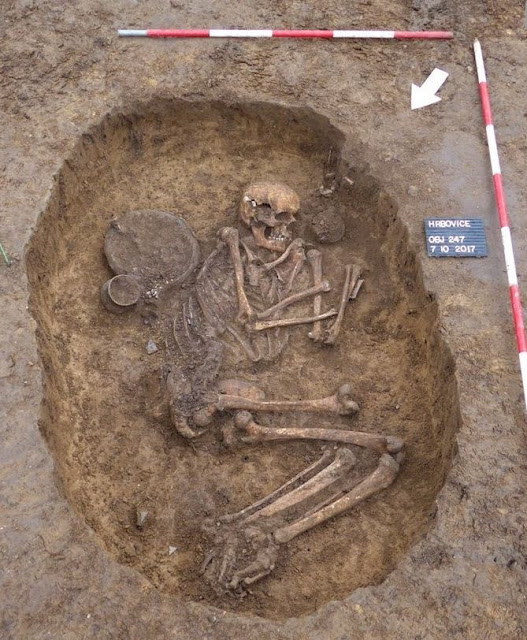 It sounds as if the Beaker settlement sits on top of a very large Funnelbeaker settlement.  Archaeologist Luboš Rypka declares TRB settlement as "probably one of the largest settlements of this culture in northwestern Bohemia".