Here's a few items that didn't make it to burial page one.  There's still a lot of under-represented regions.  Still looking for half-way decent photos from Portugal, Ireland, France, Northern Italy and the Low Countries.

These individuals were mostly buried in the same direction, but not necessarily due east.  Plenty of archer's gear, knives and bell beakers and bowls.  Each individual is buried in the flexed position, lithics are characteristic of Bell Beakers.  One or two individuals had an arrowhead to the back of the head.  The large burial mound appears to have been continually reopened.

The silo pit with an individual burial is a new tradition in Valencia with the emergence of Beaker culture.

Poland
Polish Bell Beakers are rather distinct having short heads.  This is especially true with Beakers from Zlota where the distinctions are pronounced.  Recent discoveries have shifted the entire Beaker world to the northern border of Poland and Belarus.

It is possible that a significant maternal substrate from the Beakers continues within the Northeast (Poland, Belarus and Northwest Russia) being that maternal lineages of apparent Iberian origin are strong within this region.


A very unusual pose.  Could it be that the man was morbidly obese?  His grave contains archer's equipment and fine goods, his head north and his face looks to the rising sun.

Undecorated bell beaker.  Archer.  He has a dagger similar to those of Poland Beakers.  Microscopic analysis of his stone tools makes it appear that he was a metal smith.  There is also some artifacts which have typological similarities with Corded traditions.  24th century.

Like many of the Central European Bell Beaker graves, the cultural accumulation of Unetice-like things is showing in some objects which gradually increases.

When was the wife of the Breising Bogenschutze buried?  A kind of sati?


"Burial 7 in grave 2 has the earliest date at 2294-2057 cal BC. Burial 7 is a male adult aged in the late 20s and was around 5’4 to 5’5 (160-163cm) in stature. During childhood this individual suffered an episode of physiological stress which affected his dental development at around the ages of 2-3. During his life this individual also developed a pattern of dental wear to his upper central incisors and right lateral incisor which may be the result of using the teeth for some activity.
Before he was buried a grave-pit was dug on the north side of the barrow, this was dug before the raising of the barrow. When it was time for his burial, the man was laid on his left side in a flexed position with his head to the east and his hands raised up to his face."  (Walsh, 2013)


Pavlov, Moravia
The following graves within Moravia are from the Beaker Days summit of 2007 from Eva Drozdova and a few others. 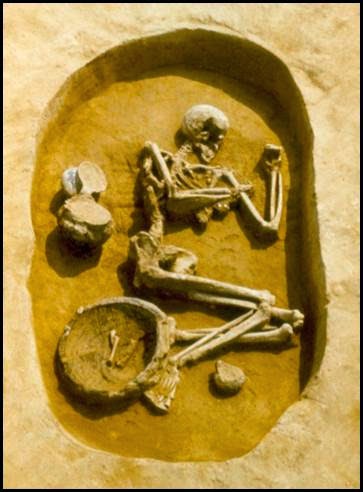 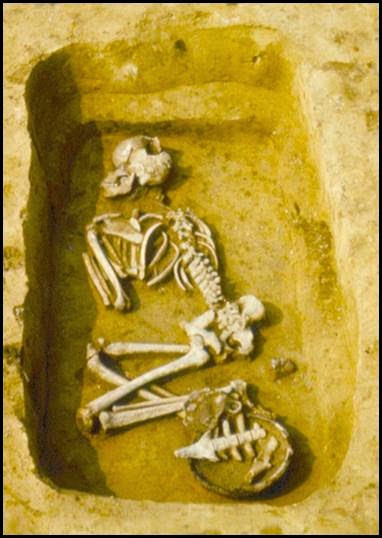 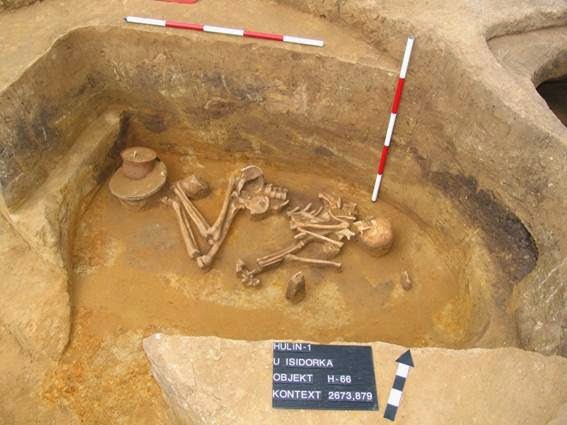 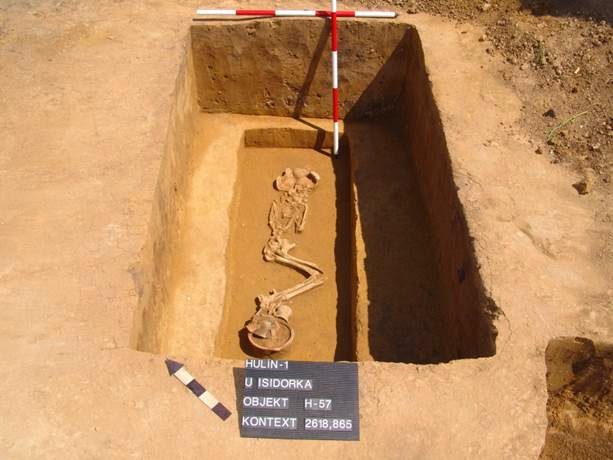 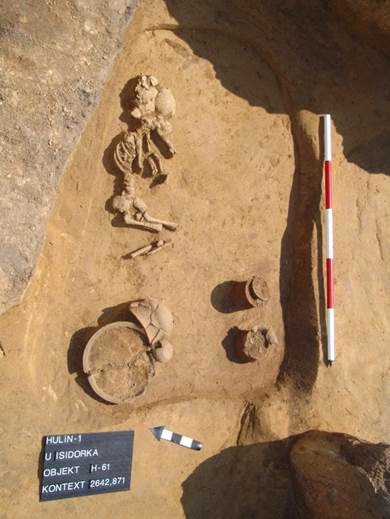 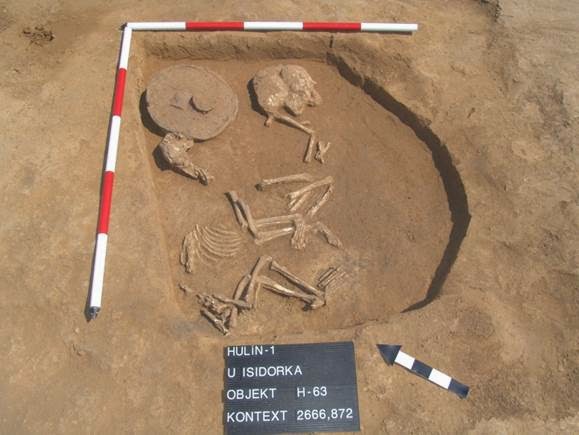 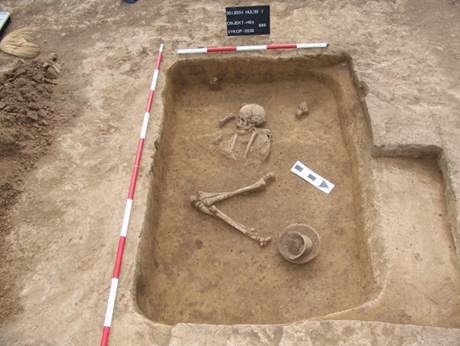 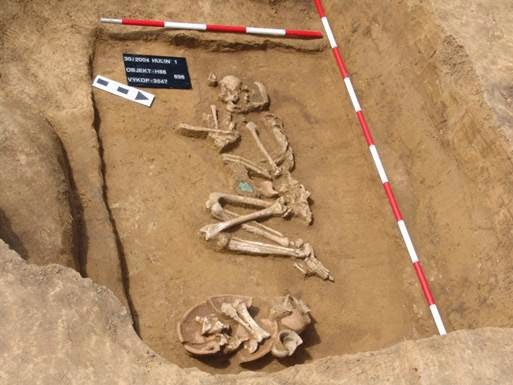 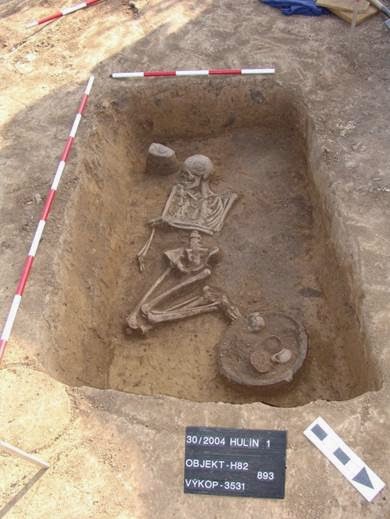 
Behind the head of this man you can make out a dagger blade.  Lemercier considers him a native individual that adopted Beaker culture.  No further explanation is given.  Here''s another view..

A young man about 17 to 19 years old.  From the same cemetery as the Acher de Alscae.  Buried in a wooden box.  In addition to the pottery, there appears to have also been a basket buried with him.  It is possible he was wrapped in linen before being put in the basket.  He was buried with a boar's tusk pendant and two beakers.  In addition to his tusk pendant, it would also appear from the morphology of five of eight arrowheads, that his Beaker ancestor's came from Central Europe, possibly Germany or Bohemia.  He also has three tanged arrowheads.  This may reflect his mixed ancestry, again having some influences from the Single Grave culture. 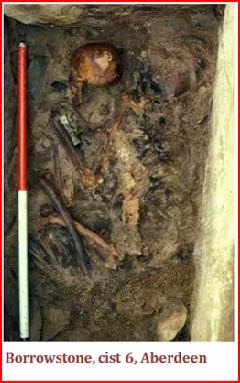 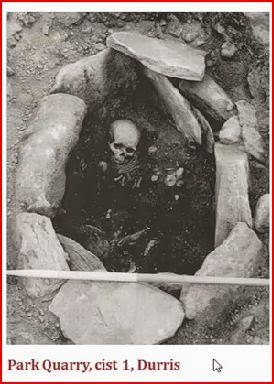 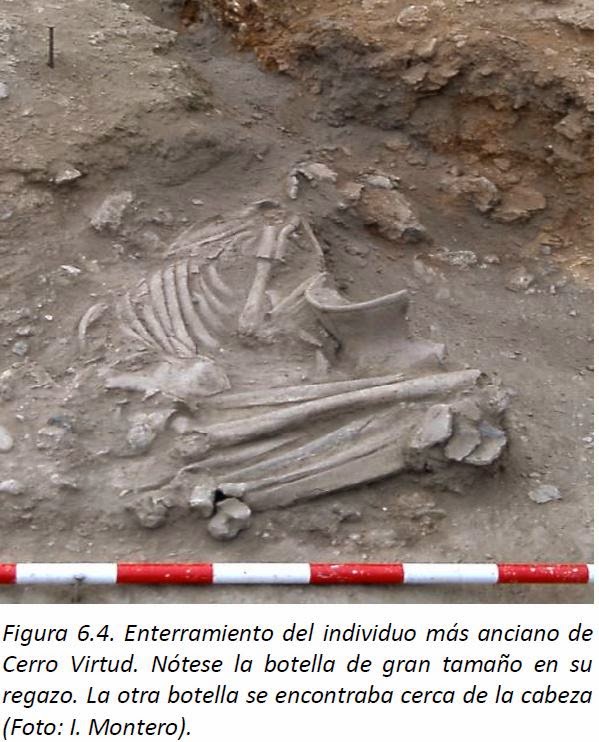 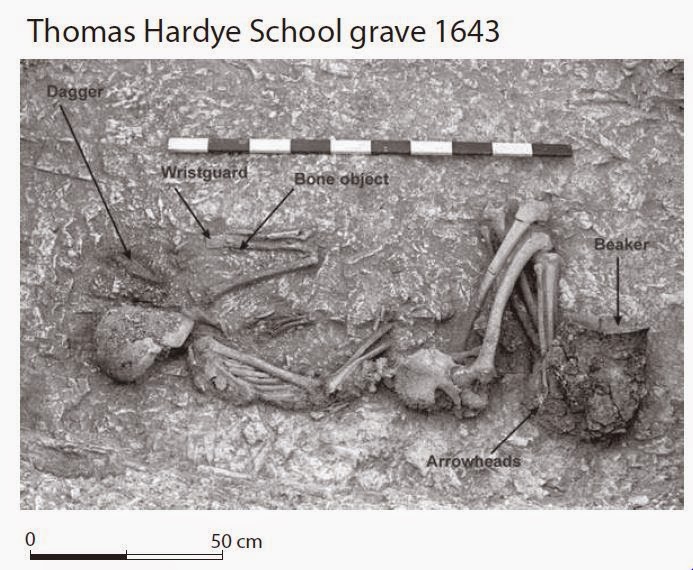 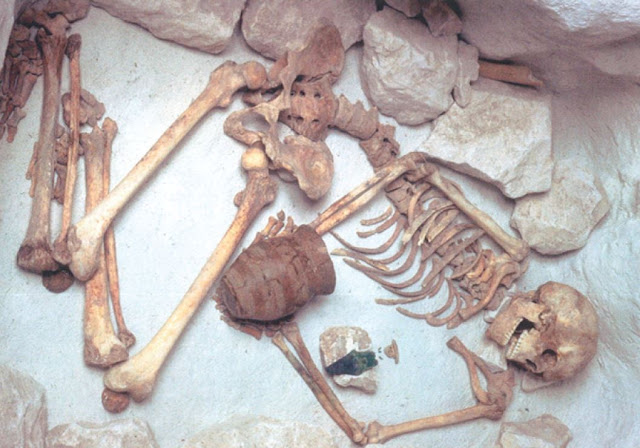