Refrigeration in the Early Bronze Age

Via Volkstimme:  "Prähistorischer Kühlschrank"
Archaeologists have discovered a "refrigerator" among the houses surrounding the German Stonehenge.  Ringheiligtum Pömmelte was originally built by Beakers and continued without break into the Aunjetitzer or Unetice Culture.  The refrigerator (big pot in a deep shaft) was probably from this second phase.  (I believe it is clear that the shaft is not a well)
(This is an aerial video of the enclosure, first of a series)
The news of this discovery stirred some lingering questions I've had about the Beaker homestead and daily life, being that it was a dairy culture and the logistical problems of food preservation.  As Victor Mair mentions in his blog post "Galatic Glimmers", fermentation of milk into something like kumis is likely how steppe peoples and Beakers would have partaken.  Since Steppe folks were seasonal movers, refrigeration in wells or pits may not have been a worthwhile effort.  Plus, lactase persistence appears to have been much less common than in modern Europeans, so fermentation must have played a big role in consumption.
As these people intermingled and settled in Northern Europe and around the snow-capped mountains further south, keeping raw milk products for longer periods of time became viable.  With that, the need to process milk may have been reduced while changing consumption habits.
So as a background, it may be surprising to know that refrigeration has been around for quite awhile.  In this case, quite a while.  There's about three methods ancient people used to refrigerate food or keep ice.  Evaporative cooling has been around since at least the Bronze Age (Yakhchals, Zeer Pots, Chinese Jian fridge).  Unsurprisingly, this method is more conducive to warm climates where evaporation is faster.
As a side funny, See Jian's high-tech $14,000 fridge:

Subterranean spaces and heavily-insulated ice rooms seem to have worked in much of Europe where the climate is cool enough.  In fact, there are other examples of cold storage from Beaker arrangements in Europe, such as these 'larders' of Oban, Argyll.  (and later discoveries Swiss pits, Pass-me-a-cold-one)
Cooling milk, yoghurt or beer may have been as simple as chilling pots in lake water or a well.
A lot of European food was preserved by smoking, salting, brining/pickling and fermenting.  At least in the Isles and Far North of Europe, preserving butter was done in bogs, which sounds gross but actually produces good results.  So good, that a lot of these Bronze Age butters are still being found, some from the Beaker period.
Refrigeration techniques shouldn't be too surprising, but how common was it, and how might have it changed milk consumption?

Posted by bellbeakerblogger at 10:00 AM 13 comments:
Email ThisBlogThis!Share to TwitterShare to FacebookShare to Pinterest

Here's a great series on Ringheiligtum Pömmelte, the German Stonehenge.
The first two videos are aerial promos, so I'm starting with video 3.  Open in your browser to get the full series.
[You can subtitle any of these in your own language.  Youtube is a bit goofy, but hover over the video and click on the "Settings" gear icon.  Turn "subtitles" on.  At first it'll only give you the German option to subtitle, but if you hover away and hover back it'll allow you to click "Auto-translate".  Then select your language.]
Posted by bellbeakerblogger at 8:51 AM No comments:
Email ThisBlogThis!Share to TwitterShare to FacebookShare to Pinterest

Stereotype: The Role of Graveset in the Corded Ware and Bell Beaker... (Wentink, 2020)

*Updated*
Why does a thing have worth?  This research helps clarify what was valuable to Beakers.  An object's value says something about it's owner, his connectedness, his needs.  Does a gallon of water have more or less worth than a chest of gold?  If your house caught on fire and you could only save one thing, what would it be?
I think many archaeologists have offered a very one-dimensional concept of worth when it comes to prestigious objects of Beaker burials.  The scarcity and novelty of copper technology has often been touted as something lusted for by a big man society that valued gaudiness and prestige.  For example, the Amesbury Archer was buried with many package objects, so he's often said to be an important man.  But how do we know that, or are we just making shit up?  Could the Amesbury Archer be just a very ordinary man?  What does his burial set really say? 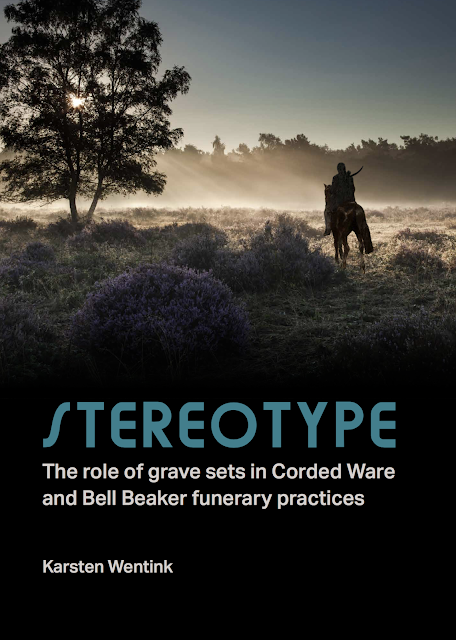 As I've mentioned, I'm trying to peck away at this thesis because I like the underlying questions and I think the answers to the questions add more natural dimensions to the desires and ideals of these ancient people.  So this post is a mess, but it's reading and editing real-time.
Summary

"Throughout northern Europe, thousands of burial mounds were
erected in the third millennium BCE. Starting in the Corded Ware culture, individual people were being buried underneath these mounds, often equipped with an almost rigid set of grave goods. is practice continued in the second half of the third millennium BCE with the start of the Bell Beaker phenomenon. In large parts of Europe, a ‘typical’ set of objects was placed in graves, known as the ‘Bell Beaker package’.

Thiis book focusses on the signi cance and meaning of these Late Neolithic graves. Why were people buried in a seemingly standardized manner, what did this signify and what does this reveal about these individuals, their role in society, their cultural identity and the people that buried them?

By performing in-depth analyses of all the individual grave goods from Dutch graves, which includes use-wear analysis and experiments, the biography of grave goods is explored. How were they made, used and discarded? Subsequently the nature of these graves themselves are explored as contexts of deposition, and how these are part of a much wider ‘sacri cial landscape’.

A novel and comprehensive interpretation is presented that shows how the objects from graves were connected with travel, drinking ceremonies and maintaining long-distance relationships."

"...therefore not simply a context of ‘showing wealth or status’. Instead it appears that specific things were selected for deposition in specific places."

Using this distinction, I think you could say that a copper dagger is valuable in a grave setting because it is a dagger, not because it is copper.  Or maybe the dagger is valuable because it was a gift?  The fact that it is copper only highlights the value of the specific object (copper, crystal or whatever) not the value of the material.  (We've discussed heirloom beads here as well)
There's a lot of thought in this and will return again tomorrow...
***Next day, Chapter 10 - "The Traveler"
If you're interested in the Indo-European question of the Bell Beakers and don't want to read an eye-bleeding thesis, you may want to at least visit this chapter as it compares a number of characteristics of the Beaker Culture to the theoretical framework of the Proto-Indo-Europeans.  Chapter 10 is totally devoted to the Beakers' adventurous nature as expressed in their funerary objects.
Wentink describes an experience in Northwest Africa where he was received in a home for formal tea that was served from a specialized silver tea set, around a specialized table, in a room dedicated for the matter.  Anyone who has been received as an honored guest in the Middle East or Central Asia could probably well identify with the pomp, pageantry, largesse and all the 'extra' of hyper-hosting.  Wanting relates this experience to what he suspects was a Beaker social front and a host/guest culture.
In a way, this makes some sense.  The cumbersome bell beaker is in more ways a statement than a practical pot for drinking liquid.  (I mean, who sits down to supper with a gallon of ____?)  I've thought the metaphorical statement related to death, and while that may also be true, the bigness could very well be part of a broader expression of being 'extra' at important occasions like hosting.  Consider you are a weary traveller and you bang on the door of a man's home in the early night seeking a place to sleep.  He welcomes you in and his wife fetches you a very tiny beer stein.  Probably not.
An important part of host culture Wentink suggests, is the fear the traveller may be a supernatural character in disguise (then describing a number of mythological examples).  The host is motivated by a sometimes superstitious self-preservation, but of course the guest is in reality more vulnerable.  As Wanting alludes, this cultural phenomenon is deeply re-enforced in the spiritual dimension.
He quotes David Anthony concerning Yamnaya:

"Guest-host relationships would have been very useful in a mobile herding economy, as a way of separating people who were moving through your territory with your assent from those who were unwelcome, unregulated, and therefore unprotected."

And that is absolutely true in a number of modern places.  Once you've been a guest at the big man's house, you're essentially protected from at least some bad guys, maybe all bad guys.  Certainly his immediate family and extended relations.  Beakers must have had some way of discerning between good guys and people-you-kill.  Given their propensity to prospect and trade, and being stateless, they must have had some social guidelines for being guests.
Gift-giving is discussed in the context of early European Cultures and what this means for the exchange of prestigious objects.  He refers to the "souvenir", not necessarily in that the exotic items traded are that, but that it is a good pivot point for a discussion of why something is valuable, like a souvenir, heirloom, or whatever.
more tomorrow...
"Stereotype:  The role of grave sets in the Corded Ware and Bell Beaker funerary practices" Karsten Wentink
Posted by bellbeakerblogger at 2:04 AM 8 comments:
Email ThisBlogThis!Share to TwitterShare to FacebookShare to Pinterest
Newer Posts Older Posts Home
Subscribe to: Posts (Atom)