We can suppose that Beakers engaged in some sort of necromancy and divination through several different means, a likely one was bothroic ritual, which would be by no means an exclusive practice.  The many empty pits they left near cemeteries with conjurable-worthy items and alcohol containers testify to this possibility.

This paper, "Scapulae and phalanges as grave goods: a mystery from the Early Bronze Age" Kysely et al, 2020, speculates on another magic practice widespread in Europe into historic times, but here focused on EBA Central Europe, that is the likelihood of some sort of scapulimancy and astragalomancy in Unetic graves.


Unfortunately this is ppv, so I won't dwell on this topic unless I get a copy.  But maybe what we see in other regions, and as the authors suggest here, is that the selection of cuts appear prescriptive instead of a general offering or practical equipment.  Certain parts and certain animals.

Maybe Ava had this done in her grave as well.


Based on a study of animal bone finds from the Únětice Culture cemeteries (2200–1700 BC) in Bohemia, Czech Republic, the study analyses selected aspects of the funeral rite in the Early Bronze Age in Central Europe. The focus is on unworked and unburned cattle, pig, sheep/goat and red deer scapulae, phalanges (+ some astragali) and ribs—significant burial phenomena in the Únětice Culture—determined as undoubtedly intentional components of funerals, that is, as grave goods. Radiocarbon and other evidence show that the phenomena existed for the whole of the Únětice Culture and perhaps longer. The presence of scapulae in 41% of the graves in the cemetery at Mikulovice and tens of other cemeteries in Bohemia and Moravia, and the complete domination of phalanges among the animal bones in graves in the funerary area at Vliněves provide evidence of the importance of these customs in the funerary rite. Rib cuts certainly represent meat offerings but the meaning of isolated (unarticulated) scapulae and phalanges/astragali is difficult to determine. The hypothesis that scapulae found always singly could also be real meat offerings is difficult to accept, so further roles, whether practical or symbolic, should be considered. An earlier suggestion that scapulae were used as a trowel for digging grave pits is highly improbable, as follows from our analysis, and we were unable to confirm the use of the flat scapula as a plate for other offerings or a base for paintings. The choice of the (near-triangular) scapula to symbolise the triangle must be left in the realm of speculation. Unworked and variably positioned phalanges and astragali are unlikely to have been used for clothing or hair decoration but, based on analogies, might have been used in magic or games (amulets, tokens, dice, game pieces). The possible use of scapulae and phalanges + astragali in divination is considered in the light of ethnographic and historical records of scapulimancy and astragalomancy on four continents. As scapulae and phalanges do not usually appear together in a single grave, they could represent attributes of different social groups or statuses.

Posted by bellbeakerblogger at 5:24 PM 11 comments:
Email ThisBlogThis!Share to TwitterShare to FacebookShare to Pinterest

Argonauts of the Atlantic Conference

Coming up at Bournemouth University on the 20th of February.

Posted by bellbeakerblogger at 10:52 AM No comments:
Email ThisBlogThis!Share to TwitterShare to FacebookShare to Pinterest 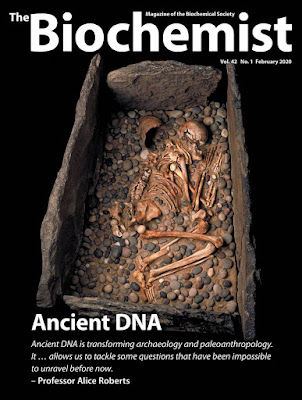 Posted by bellbeakerblogger at 3:51 PM 40 comments:
Email ThisBlogThis!Share to TwitterShare to FacebookShare to Pinterest

We might imagine our distant ancestors as the heathens who lacked the decency to wash the dry blood and brains from their beards before dinner.  Foremost among them, the fierce Beaker who spread the M269 among his two dozen or so sobbing wives afterwards.  Does that characterization wholly square with the majority in their society?

Fierce as they were, the Beakers had their standards and apparently a sophisticated family system, as we learn in "Kinship and social organization in Copper Age Europe.  A cross-disciplinary analysis..." by Sjogren et al, 2019.  The study examines relationships in farm cemeteries at Irlbach and Alburg of Bavaria through personal DNA.

It is becoming more evident that the Bell Beakers were a generally-monogamous folk.  This paper follows the Lech Valley paper and confirms the existence of a broader 'system' of female exogamy, patrilocality, patriarchy and fosterage.  The importance of this paper's implications cannot be underscored enough.

Sjogren et al. compare reconstructed PIE kinship structures to that of the Straubing Beakers, and a reasonable assessment is that they are quite similar.  Up till now, various hypotheses have attempted to link technologies and localities of pre-historic archaeological cultures to that of reconstructed PIE.  Whatever the correctness of the previous hypotheses, this is an entirely new twist combining DNA with other fields of study.


The implications go beyond simply guessing at what language a certain group of people spoke.  Instead it brings us back to the strength of the Beakers and what was it specifically that caused the success of the Proto-Indo-Europeans in their spread across vast stretches?  What was it that caused the nearly uniform y-chromosome changes, as we see in completely M269 Irlbach and Alburg?

I have mentioned before that horses, wagons, metal, dairy, etc, are unlikely to be the engine of this expansion.  Rather, the answer is before us in this study.  Monogamy mostly (Heinrich, Boyd, Richerson, 2012).

And the strength of the pack is the life mates and a social system that is well-ordered.