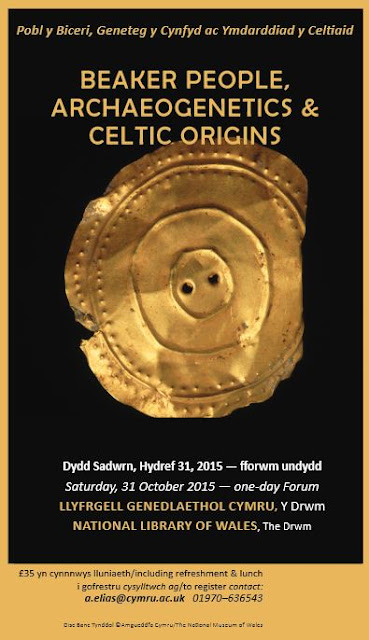 Would you call this broadcasting?  Wolfgang Haak speaks first, John Koch speaks last.  You will recognize most of these names. 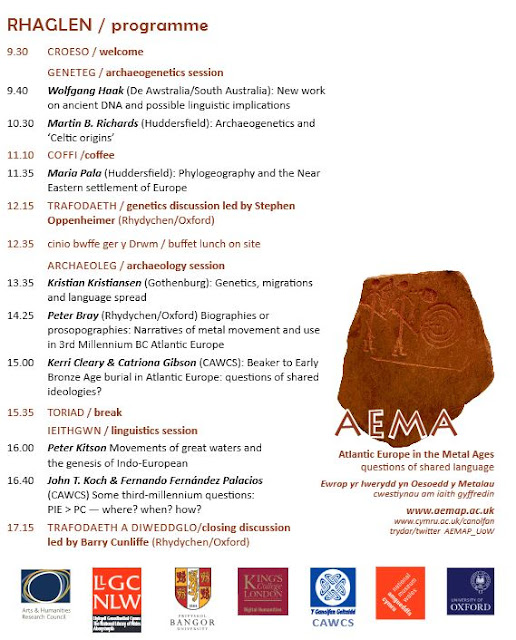 I suppose the speaker list gives either an indication of the direction the genetic evidence is leading or perhaps the kickoff of another large multi-university genetic study.  It would appear to be a precursor to a genetic program of the British Neolithic & Early Bronze Age.

The Program
Posted by bellbeakerblogger at 9:12 AM 57 comments:
Email ThisBlogThis!Share to TwitterShare to FacebookShare to Pinterest

An EBA logboat from about 2,000 B.C. was discovered near Faversham (outside Canterbury in Kent, England).  It was found in the mud of a dockyard this week.

The logboat was the nautical mainstay of Northern Europe from forever till fairly recent, no pun intended.  From Past Horizons

Speaking of folks paddling down rivers, the ISBSA 14 (International Symposium on Boat and Ship Archaeology) Conference concluded on Friday the 25th and there is an abstract book up from Waldemar Ossowski on Academia.  Looks like a few papers worth blog delvage.
****Update****
As Michael points out below, somehow I missed the description that is most interesting, that is a feature that the archaeologist speculates might be for a mast.
Some of the heavier logboats and plankers seem very cumbersome.  The reconstructions seem difficult to manuever and sappingly slow.  This could add a new twist to early maritime activity in the Atlantic.
Posted by bellbeakerblogger at 11:09 PM 6 comments:
Email ThisBlogThis!Share to TwitterShare to FacebookShare to Pinterest

I came across a dogblog exploring the evolution of dog brachycephaly that got me thinking.  It reminded me that Stephen Jay Gould hypothesized that dog brachycephaly might have been a subconscious human preference that neotenized most breeds.  Pugs and spaniels are cuter than timber wolves.

The English word, cuteness, has been used to describe neoteny and it seems in humans both sexes are oppositely attracted to cute features in each other, most of the time.  All humans exhibit some theorized forms of neotony, from glabrousness to light hair; but if you've ever been to an East Asian country or Japan, you may be familiar with Kawaii, which is G4-level cuteness.  Asian culture has been variously argued as encouraging rapid neoteny and gracialization in that part of the world.

In general, primates are often bracycephalic as infants and then become progressively long-headed as they mature.  (And to clarify, newborn alien heads don't count)  So brachycephaly in East Asians or some Caucasians may be an indicator that this too is a sexual-driven change, not random ping-pong balls bouncing off the walls of the universe.  (I will point out now that brachycephaly here refers to all correlated features of the skull, not a simple cephalic number)


Almost all domesticated animals, minus the horse, have tended to become increasingly brachycephalic over time (Darwin) and there is a correlation between the length of the skull and the length of the limbs in most mammals, including humans (Henry Osborne); this also convincingly latitude/temperature correlated (Allen's rule).

Many correlations with shortened skulls are known throughout the face and skull of most mammals (Cuvier), which are generally similar in humans. Whatever the cause, what is clear is that body proportions and head-shape are the result of particular ancestry beyond natural variation.  Pugs have pups that look like pugs.


So I'll quickly interject a point concerning the Beaker folk, since they are shockingly mammals as well, not decorative pots.  The issue of Beaker brachycephaly is not a topic of simple cephalic index, one number divided by another.  Again, it is a complex system of correlated features of the face and the features of the skull.

Shifting gears now, where I was going is the question of an abrupt appearance of short-headed people in various prehistoric regions, in some cases as was once variously thought, emanating from the Zargos region or Central Asia.   Don't get too wrapped up in any of this since it's all theoretical plasma and not dogma or empirical science.

First, I'll juxtapose two papers.  One concerning "The Beaker Problem" and one, "The Sumerian Problem"  This paper:

"A Test of Non-metrical Analysis as Applied to the 'Beaker Problem'." by Natasha Grace Bartels (1998) thesis tests the classical understanding of intrusive 'heavy-boned, brachycephalic warriors' opposite to Neal Brodie's position that shape in Britain was progressively changed by using a collection of Neolithic and Early Bronze Age skulls from a Northern zone and a Southern Zone of Europe.

After lengthy discussion, Bartels gets to brass tacks on her European collection and concludes:


"This would appear to support the theory that the 'Beakers' may have been a distinct migratory population, and that the movement of Beaker vessels and associated items was not simply the result of cultural diffusion, through the trade of status items..."

This conclusion is not unusual.  In Little Poland (Budziszewski et al), Beakers are very distinct in terms of head shape, but also massive cheeks, heavy brows and high vaults.  Almost identical features for the large Hoštice I cemetary in Moravia (Eva Drozdová, 2014(?)) where the folk are also equally 'robust' and range from brachycephalic to hyper-brachycephalic.

I would continue, however I believe distinct shape and facial features of Beaker heads is generally well established and uncontested in European archaeology.  Even skeptics like Gordon Childe, who was deeply skeptical of the cranometric pseudo-science of his time, made a single exception for the Beakerfolk where the evidence is fairly overwhelming.

Now, a somewhat similar controversy regarding the, not-too-well-represented Sumerians:

"Physical Anthropology and the Sumerian Problem" by Arkadiusz Soltysiak (2004)

This short paper mostly gives a history's history of race, migration and cultural change in the Mesopotamian region through the progression of anthropology.  Like the Beaker problem, there was identified an early narrative with 'short-headed' intruders, a narrative rolled back because of a complicated demographic history and spotty human remains.  But the question remains as to whether Mesopotamia's history was significantly altered by 'hill people' at different times in its history or whether several ethnic groups existed at this time, being demarcated by space or social status.

These "whomever problems" seem to be present in more than just Childe's Western Europe or Frankfort's Mesopotamia.  Thomas Callan Hodson noted a similar phenomenon with a highland Anatolian-derived immigrant group in the Indus Valley Civilization, apart from the other Western farmers and Asians.  This is a problem in Petrie's Abydos and Naqada with a majority population that is long-headed and a small outgroup that is short-headed.  (as he saw, a distinct ethnicity)  Cyprus? How about the Pontic Steppe?  This problem rears its head there as well (no pun intended).

This is the Beaker problem.  New people or old people?


Also, another perspective by Rokus blog
Here, he argues that brain evolution has changed head-shape in AMH slowly from the hyper-focused hunters of the Upper Paleolithic to a more sedentary and specialized Modern.


Posted by bellbeakerblogger at 5:18 PM 12 comments:
Email ThisBlogThis!Share to TwitterShare to FacebookShare to Pinterest

Chapter 13 is based off a research paper by Scott, Anta, Schomberg and de la Rua looking at historic and modern Basque dental classification compared against all others, particularly Eurodonts.

Not surprisingly, the modern Basques are closer to Santa Marians (who are Basques from a Cathedral crypt).  There is no feature that distinguishes Basques, however Basques do appear to have higher diversity in features than any of their neighbors (mental note).  You can see below the basic breakout: 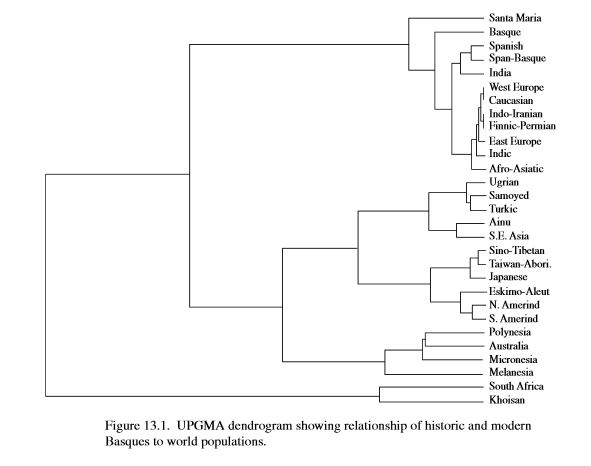 Exploding out the Eurodonts is surprising and unsurprising.  Atlanteans cluster together, and oddly enough with a poorly-defined Levant (and it appears possibly with some groups in India).  North Africans share a strange affinity to some North Sea Euros.  Finland and Early South Asians form outgroups. 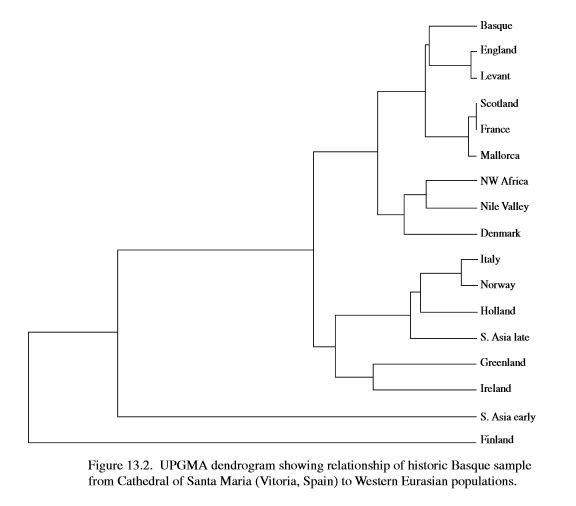 It would be nice to have bigger data and then look at other dietary 'adaptations' to agriculture by population: glucose, lactose, alcohol, metabolism, food processing, etc.  It would also be interesting to see a dendrogram of various Beaker groups with modern European groups such as the Basques, Amoricans and the English. 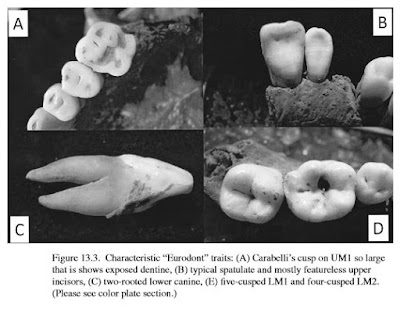 What we have previously is a comparison of Swiss Bell Beaker/Late Neolithic groups with those from several places in Europe, notably the Carpathian sphere and Northern Iberian Chalcolithic.  (Desideri and Besse, 2010)  To simplify, here is their conclusion on the 'foreigners' in Switzerland at that time:


"So, we have seen that the Swiss sites do not mix with the eastern domain, but fit well with the southern domain. The axis of external influences is clearly southern, whether this occurred during the Final Neolithic or the Bell Beaker in western Switzerland. "

Specifically, this similarity of influences was more akin to the sphere of the Northwestern Iberian Chalcolithic.  The amateur reading of this is that the whole point of this study punched a hole in the Begleitkeramik justification for a Westward movement of Beaker immigrants.  In other words, people who used Begleitkeramik in this realm, apparently did not have ancestry in the Carpathian or Bohemian sphere, the necessary point of the common ware vs. funerary ware argument.

In more other words, the Western Swiss Beakers did have immigrant ancestry, just in the wrong direction.  This is not to eliminate the probability that people ancestral to Beakers had ultimate ancestry in the East at some point.  It just won't be a one paragraph story.