New discovery in Supraśl, Podlasie, Poland, where there appears to be indications of settlement or campsites.  Some or most of it appear to be a ritual deposit involving feasting, drinking and ceremony.


This site is in the far northeastern part of the country, and although there are more easterly indications, this one suggests the presence of a people with a Beaker identity.  This really moves the goal posts for the Beaker phenomenon much further north and east.


"This year's finds, while exceptional due to the presence of the most easterly collection of objects associated with the Bell Beaker community, do not explain the migration routes and distances of its carriers" - concluded Dr. Manasterski.


"The entire ritual deposit is an exceptional find in the central Europe. It contains one of the richest collections of objects usually found in the elite skeletal graves in Western Europe from this period" - said the researcher.

Here's a new paper on bell beaker material from the Middle Atlas.

Pastoralists frequenting these rock shelters left pottery that was locally made, and well made.  These areas are also more inland and continue to push the envelope on Morocco being just a marginal area.


You'll notice from d'ifri Ouzabour that the geology is heavy with iron oxide.  Although it is not as red as the Anti-Atlas and the Sahel, you see essentially where bell beaker pottery gets its characteristic and highly conforming color.  You can check out one of my previous posts where Maju embarrassingly corrects me on the designation of Entisols from the geological survey I posted.  (you'll get the point though)

*An interesting footnote about the Middle and Anti-Atlas: it's here that you find the highest incidence of Rh- blood in world, at least among some Berber tribes.  The Basques and Irish are formally the highest, or should I say 'formerly'.  Keep that cline-in-your-mind when you consider that it is a heritable trait.

Between the U.S. Geological Survey of Africa and a map of the Neolithic subpluvial of North Africa you'll get a good idea of where pastoral populations were living in the Neolithic.  To a great extent, the donor populations still do, although heavily mixed.

The geology of Europe has very few options for 'correctly' coloring bell beaker slips.  In some cases potters resorted to painting the pottery copper red, which is totally cheating.  This can be viewed on the burial page with the Barbing Bogenschutze. 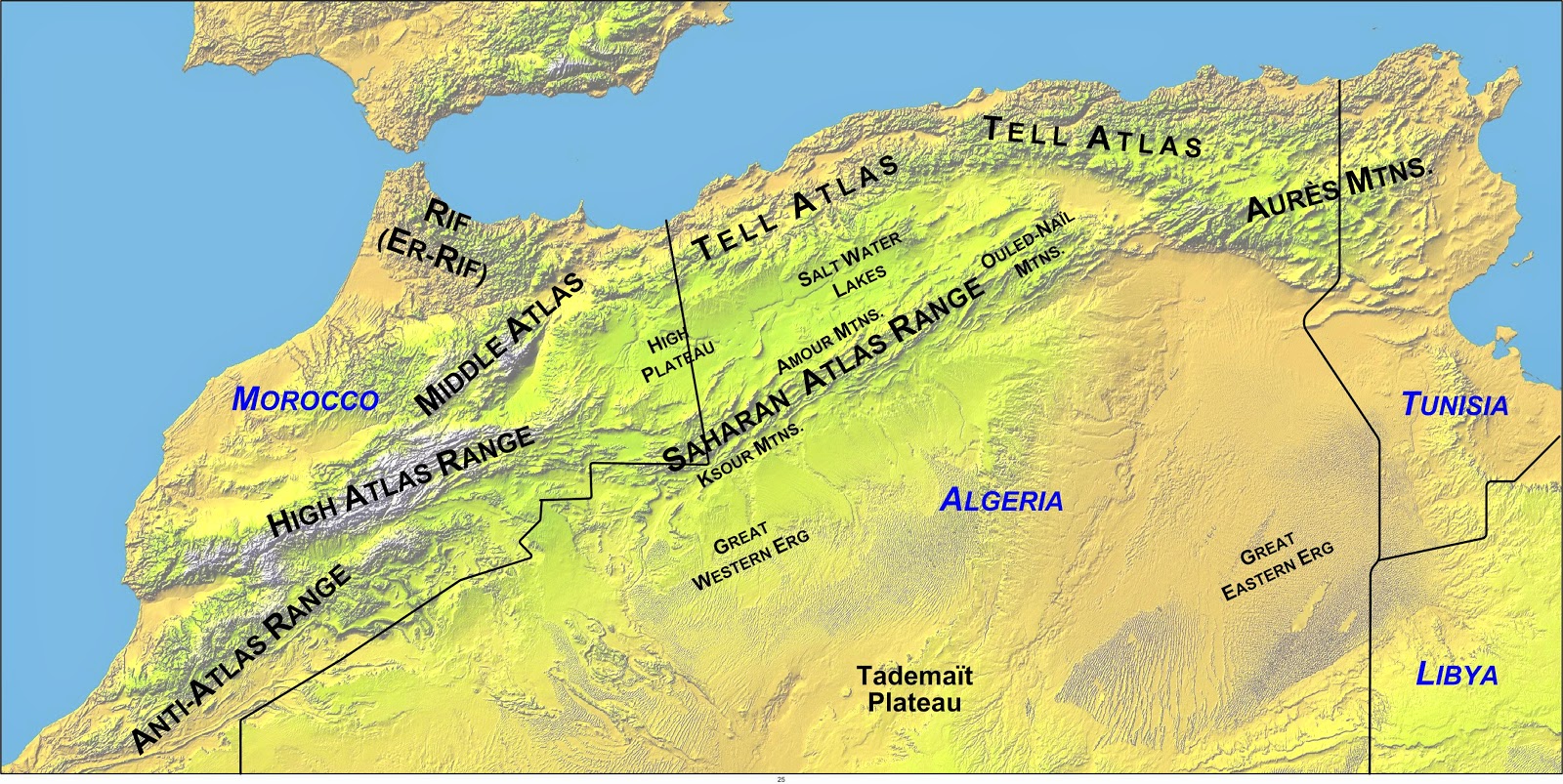 The big paper will be out later this year.  I look forward to seeing it.

**Hat-tip to Davidski for linking this paper on non-metric dental traits between Morocco and Iberia.  [Link]

I have two other non-metric dental studies to add to it and will post abstracts at some point in the coming weeks.

ABSTRACT: The aim of this paper is to announce the discovery of new elements of the Bell Beaker pottery in Morocco.  Although the results are limited, disparate and coming from an unreliable stratigraphic cotext, yet all can enrich our knowledge about the spread of Beaker pottery, expand the area of geographic expansion of this complex off the Moroccan coast and affirm that this highly advanced civilization in Central and Western Europe, especially in Andalusia and in southern Spain has also grown in Morocco. The increased presence of this ceramic inland to Central Middle Atlas and the good representativeness of Bell-Beaker culture in Morocco challenges the assumption of simple circulation of this ceramic and resumes debate on the existence of an autochthonous foyer. However, intact archaeological levels and reliable radiocarbon dating are lacking for the most part to be able to resolve the question of Campaniforme in Morocco.


If I understand correctly, Koch theorizes that Proto-Celtic is partially defined by the kind of errors that a speaker of Proto-Iberian or Proto-Basque* would make when learning Indo-European.  Both languages had similar reduced consonantal systems (p-less) theoretically making IE sound Celtic.

In "Celtic from the West", Cunliffe and Koch theorize that Proto-Celtic was refined in Atlantic Europe in the Middle Bronze Age rather than being an import by warriors riding unicorns from Central Europe.

1)  It is demonstrable that languages spoken in Spain and France, regardless of their inter-relation, had common reduced consonantal systems in their ancient forms and that Celtic happens to be reduced from Indo-European in similar ways.

2)  On the same token, the sound changes that made Celtic "Celtic" cannot equally be explained on a theoretical basis by any known substrate in Central Europe, that is if we were to assume external factors.

As mentioned on Genetics (Page 1), we have upper and lower limits for what is possible in the development of Late Western Europe.  It's like burning a candle at both ends.

1 Beakers spoke Vasconic but eventually changed to IE.  The map above doesn't help this scenario.

2 Beakers spoke a mixture of Indo-European and Afro-Asiatic.   If Beakers came from the African Steppe, and particularly Southern Algeria and Morocco, then their IE may have already had a slight Afro-Asiatic substrate. [here]

3 Beakers spoke the very basal Italic and Celtic languages, both being sufficiently detached from further developments/refinements by seclusion in the African steppe, post SPR.
Posted by bellbeakerblogger at 2:00 PM 23 comments:
Email ThisBlogThis!Share to TwitterShare to FacebookShare to Pinterest
Labels: Cunliffe, Koch, Linguistics

Stonehenge's most intricate archaeological finds were 'probably made by children'
Posted by bellbeakerblogger at 10:18 AM No comments:
Email ThisBlogThis!Share to TwitterShare to FacebookShare to Pinterest
Labels: Biometrics, gold, metallurgy 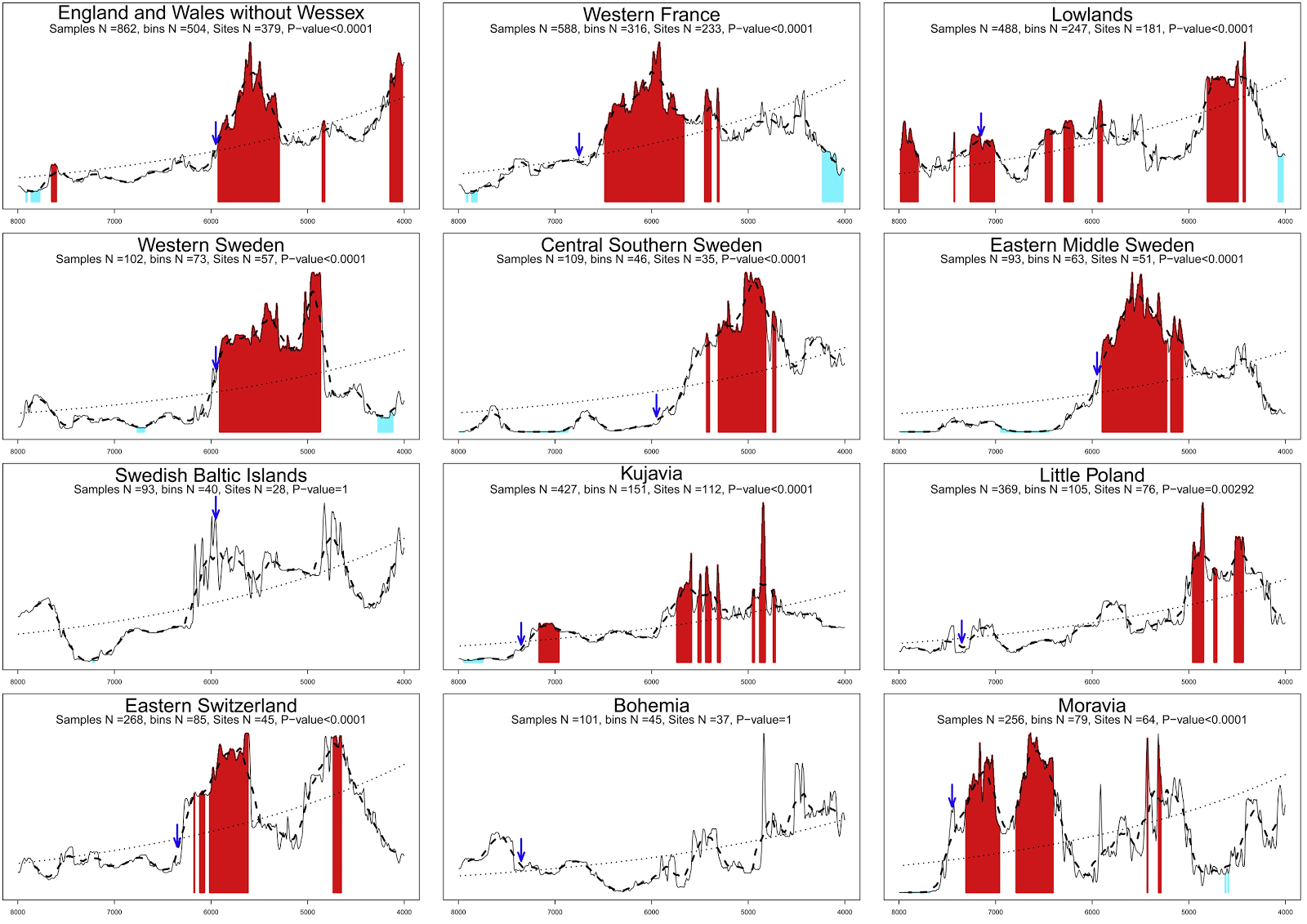 It seems this paper is an attempt to bat down critics of 1.0 with an expanded timeframe from 10k to 4k bp.  It cover almost 14,000k dates in 12 regions that mostly show a bust pattern after the Early Neolithic.

What I find interesting is that there are catastrophic declines in Europe throughout the third millennium, even after the arrival of Bell Beakers in the relevant regions.  Of course, dates end at 2,000 B.C., which is frustrating and very relevant for this blog.  I would imagine an increase occurred everywhere after this date.

Putting this in context is more interesting.  It's not surprising to see the population of Britain expanding during this time, as it would appear to have been the subject of ongoing Beaker immigration from everywhere (Lower Rhine and Central Europe).

However, the Moravian and Bohemian numbers are simply jaw dropping.  Not only did it defy the continental trend from the sampled areas, it was likely the baby factory that sent immigrants to other parts of Central and Eastern Europe.  So it wasn't just 3-4 times expansion.

It's also worth pointing out that the longevity and infant mortality estimates of several of the Moravian and Bohemian cemeteries are almost unrealistically modern.  Beakers in this region appear to have lived long and healthy lives.  To me this indicates the early establishment of a stable tribal nation with strong leadership.


In a previous study we presented a new method that used summed probability distributions (SPD) of radiocarbon dates as a proxy for population levels, and Monte-Carlo simulation to test the significance of the observed fluctuations in the context of uncertainty in the calibration curve and archaeological sampling. The method allowed us to identify periods of significant short-term population change, caveated with the fact that around 5% of these periods were false positives. In this study we present an improvement to the method by applying a criterion to remove these false positives from both the simulated and observed distributions, resulting in a substantial improvement
to both its sensitivity and specificity. We also demonstrate that the method is extremely robust in the face of small sample sizes. Finally we apply this improved method to radiocarbon datasets from European regions, covering the period 8000 to 4000 BP. As in our previous study, the results reveal a boom-bust pattern for most regions, with population levels rising rapidly after the local arrival of farming, followed by a crash to levels much lower than the peak. The prevalence of this phenomenon, combined with the dissimilarity and lack of synchronicity in the general shapes of the regional SPDs, supports the hypothesis of endogenous causes.

Posted by bellbeakerblogger at 8:42 AM 13 comments:
Email ThisBlogThis!Share to TwitterShare to FacebookShare to Pinterest
Labels: Britain, Moravia, population data

Metallurgy in the Meseta

The CMP tradition is one of several mysterious aspects of Beakerhood that points to Eastern connections or an ultimate origin.  Although Beakers probably immigrated to Southwestern Europe via a homeland in the Western Saharan Steppe, it was not much further back that their ancestors came from the interior Near East as part of a larger secodary products expansion.

The Proto-Circumpontic tradition not only resonates strongly in the morphology and use of the metal items they constructed, but importantly their thin sheet metal, foils and solar cult regalia testify to a heritage in the southern domain of the CMP.

It appears that a continuation of massive folk movements in the Pottery Neolithic were emanating from Eastern Anatolia and Northern Mespotamia around this time.  These movements seeded the important Maikop and Kura Araxes in later times, which in turn may have planted the later Single Grave Culture.  [More]

*Update*  It looks like I may have deleted the original published post!  I probably did that while screwing around on my phone.

My original comments linked the CMP tradition with the Secondary Products Revolution.  It seems to me that the spread of CMP is linked with SPR in their full expressions.  Proto-CMP and SPR both likely originated in the same place as well.

Of course for the Beaker Blog, the spread of these traditions in North Africa is my primary interest, because its from one of these westward migrating groups that Beakers probably originated.

Metallurgical Provinces of Eurasia in the Early Metal Age: Problems of Interrelation Institute of Archaeology of Russian Academy of Sciences, CHERNYKH 2014 [Link]
Posted by bellbeakerblogger at 12:37 PM 4 comments:
Email ThisBlogThis!Share to TwitterShare to FacebookShare to Pinterest

The Bell Beaker genetics page will be up today.  I've been focused on other priorities lately.

Even though the results shouldn't be surprising, they continue to be:

The new LBK results further add to the total weight of the theory that agriculture developed in the Southern Caucasus and Eastern Anatolia among a population that was largely defined by paternal haplogroup G.

Read the abstract at Dienekes:

Posted by bellbeakerblogger at 9:24 AM No comments:
Email ThisBlogThis!Share to TwitterShare to FacebookShare to Pinterest
Newer Posts Older Posts Home
Subscribe to: Posts (Atom)