I thought I'd cut and paste some of R. Rocca's early Beaker ancestry runs from Anthrogenica.
Check out his comments.

I'd have preferred to do this myself, but I just don't have time for anything at the moment.  But Rocca's runs are plenty for some commentary, so I'll highlight some of his observations and add a few more with snips from his post.

The first thing he does is take the oldest, directly-dated Bell Beakers and sees what they prefer among Neolithic European populations.  Makes sense.  Here's a snip from the oldest Beaker, a Dutchman.

Comment #1.  You can see that like almost all Bell Beakers, the Dutchman has a very strong affinity for the Corded Ware people, either the German CWC or the Baltic CWC in various proportions.  Except in the Dutchman's case using this measure, it is a whopping 80%.

What you see in these Beakers and other runs are digits for Comb Ware, GAC, Narva or Sweden MN.  This is unquestionably NE European influence coming very directly from the Corded Ware Cultures.  The expansion of CWC in Europe was probably multi-polar, fluid and web-like, so the differences in digits among individuals might reflect the personal genealogies of particular wagon bands.  (being more or less of Swedish Battle Axe, Moravian, Dutch Single Grave, Baltic, etc, etc.)

Culturally this makes a lot of sense to me.  Phenotypically it makes sense.  The very first Mittle-Saale Beaker made sense as being half local CWC and something else.

It's not lost on me that there is a significant presence of R1b in the Narva Baltic where the CWC intruded, but that's a lot late and apparently the wrong stuff, plus we'd be looking at huge chunks of Narva (not the case).


Comment #2.  Rocca notes that this Beaker is interesting in that he has a respectable chunk of Vucedol ancestry that his clan and most non-Iberian Beakers lack entirely.  I'm either right or wrong about this (I don't care in the slightest), but I'm pretty sure that a few individuals in Csepel Island, and by extension the Malopolskan region, have direct Yamnaya influence from the Tisza River region and south of this.  In fact, there's cultural influence to suggest this scenario.

I'm not denying the relatedness of the Yamnaya and Beaker Y-chromosomes.  Instead I'm just pointing out that it just ain't that simple, people.  Yes, I'm suggesting Bell Beakers and Yamnaya mixed within an erogenous zone. [cymbal shot]  I mean contact zone.


Comment #3.  None of the Continental Beakers like them some Remedello, not even the Italian.  But Remedello, Vucedol and SW Iberia seem to have something together not insignificant.  He asks if this is the Stelae Road.  Some-'ems up, don't know what.


Comment #4  Clearly, Bell Beakers are poking all around at low levels in the Yamnayo-sphere.  What I've seen here and in other runs is something that splits between Kalmykia and Bulgaria.  If we go back to the Dutch Beaker at the top of the page, there isn't a whole lot of clutter.  Basically we have a fairly clean ancestry of 80% Corded Ware 10% France MN/LN and 10% Yamnaya.

I5748 is early enough and clean enough that he could probably tell you about his great-grandparents on his mom and dad's sides.  Would he tell you that his father's side were full-blooded Yamnaya immigrants or is this an indication that we should be more careful in examining early steppe influence in NE France and Germany?

If you got runs, by all means post them.

Update
Thanks to R. Rocca for posting these at Anthrogenica, I'll put up Alberto's next, then Andrew K's.
Posted by bellbeakerblogger at 4:58 PM 18 comments:
Email ThisBlogThis!Share to TwitterShare to FacebookShare to Pinterest

The DailyMail reports on a box of miscellaneous stuff (probably from an old detectorist) that turned-up at a car boot sale.  Inside was a folded-up work of Beaker gold. The foil has the characteristic points around the edge, certainly Beaker period.  Not sure how long the unfurled foil was, but it looks longer than the description.

Posted by bellbeakerblogger at 10:25 AM No comments:
Email ThisBlogThis!Share to TwitterShare to FacebookShare to Pinterest

Cotton Henge to be Bulldozed

Cotton Henge, a 4,000 year old ditched enclosure, will be dozed to make room for a new warehouse that will go out of business in 4 years.  Video interviews in the link. 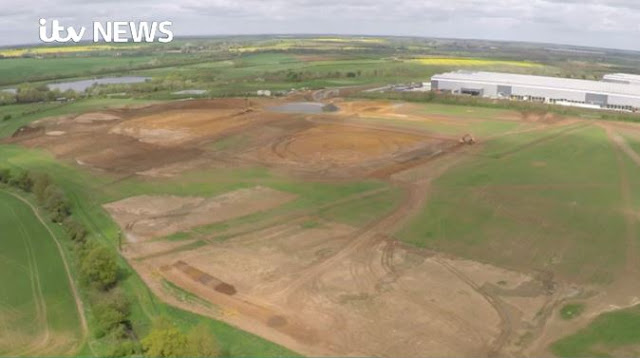 I want to put this in context so you can be properly pissed.  The developer and land owner already knew of the existence of the Neolithic ditched enclosure.  Features like this are clearly marked on the plat, the geological-topographical survey, county maps, archaeological surveys and numerous other documents.  > and websites Megalithic UK

Most of the time, springs, mines, small cemeteries, old wells and other such features are marked on the documents used to transfer property.  So if you want to build a warehouse, don't buy a tract and pretend you didn't know there was a 4,000 year old ditched enclosure when you signed the papers.

As a land owner, depending on the country, you have full legal rights to a tract of land including all minerals, water courses, surface and timber rights, so long as they are properly conveyed without reservations.  However, if that tract of land contains a small cemetery or items of archaeological significance you do not have the power to control those because they ARE THE NATURAL RESERVATION of the former owners (or at least a public interest).  You don't have rights to certain waters, easements or public concerns, like hunting endangered species or damming up a navigable creek.

What has happened here is that the developer is claiming that he has been unfairly burdened by the "discovery of an relatively unimportant archaeological site" and that rescue archaeology is the reasonable compromise to satisfy archaeology and development.  Look closely at what their doing.

Here's the thing.  Try to build a picket fence in the village of Cotton without fifty permits from the county and get shot down every time because of the thrity thousand regulations in the building code.  This is a fast-talking company that is twisting the ethical norms for a cheap return.  They give two shits about the local people or their heritage.

The long term damage isn't the loss of one archaeological site, it's that the very concept of rescue archaeology is damaged by shenanigans like this.  Plus the definition of what rescue archaeology is expanded from "oh crap, our dozer hit a stone cist" to one in which the archaeologists drive up to a site driving a cement mixer.  The mutual cooperation and trust between developers, archaeologists, city planners, private property owners, and the citizenry is eroded.  That isn't good for anybody.


Posted by bellbeakerblogger at 11:07 AM 3 comments:
Email ThisBlogThis!Share to TwitterShare to FacebookShare to Pinterest

The May 2018 issue of Current Archaeology features the Bell Beakers.  Here's one of the articles by Katherine Krakowka.

Posted by bellbeakerblogger at 9:19 AM 11 comments:
Email ThisBlogThis!Share to TwitterShare to FacebookShare to Pinterest

Following the untimely passing of Jean Manco, a fitting follow-on in the West Country.

It sounds like a respectable grave in tin country, hopefully Dr. Frieman will keep the newspaper photographers busy!