Several outlets are reporting on a new exhibit at the Gibraltar National Museum.  "Calpeia" dates to the earliest Early Neolithic in Southern Spain.  From The Sun:  Face of Neolithic woman, 40, recreated in stunning detail from 7,500-year-old skull found on Gibraltar.

DNA analysis was conducted and found that in addition to dark hair and eyes, most 90% of her ancestry can be derived from Neolithic Anatolia. 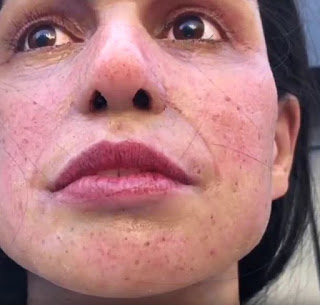 Her ancestry is important because it demonstrates a genetic connection to the Near East, especially where later styles of pottery can appear very similar to the Al Almagra styles of Southern Iberia at this time.

The most interesting and satisfying aspect of this investigation is the revelation that Neolithic ancestry slightly preceded detectable farming and herding in Southern Iberia.  I've argued recently that the mitochondrial haplogroups at the boundary between the Iberian Mesolithic and Neolithic reveal the rugged pioneers that led the wave of their expanding nation. 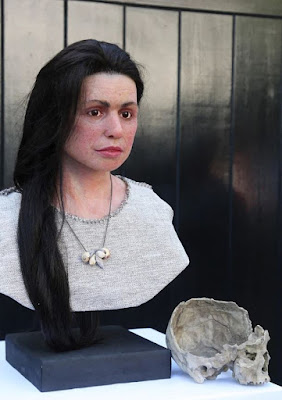 Her hunter ancestry (~10%) may indicate that her maritime ancestors followed the North Mediterranean route.  Maybe detailed analysis can help identify how recent those marriages happened and if it was hunter ancestry specific to Iberia, Italy or somewhere else.

Posted by bellbeakerblogger at 1:45 PM 3 comments:
Email ThisBlogThis!Share to TwitterShare to FacebookShare to Pinterest

There is some subtle broadcasting that we a genetic surprise is in store from a dolmen in Switzerland.

Out recently was this, "Who lived on the Swiss Plateau around 3300 BCE?  Analyses of commingled Human Skeletal Remains from the Dolmen of Oberbipp"

Here we have a Late Neolithic dolmen containing some 44 individuals in what appears to be a gender differentiated scheme.  Some appear to have been buried supine with flexing of the legs evident in a few people.  Sounds interesting. 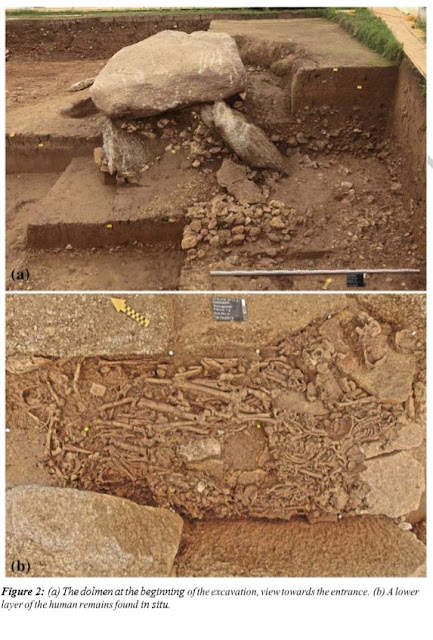 Inga Siebke and Sandra Losch have already hinted they detect genetic steppe influence in the Swiss plateau earlier than that in Germany, but they haven't published those findings just yet.  They have lectured on the findings but I don't think anything is publicly available.

Also out, another paper on the radiocarbon dating.

*Just to clarify.  Siebke and Losch have an additional two or three dozen individuals from other sites in Switzerland.  So I'm only speculating that within the timeline in which individuals were buried in this dolmen there was a point when individuals with mixed ancestry appears.  We see this in other Megalithic sites such as Iberia and Britain.  The question is: how early, and how early at this site?
Posted by bellbeakerblogger at 12:01 PM 6 comments:
Email ThisBlogThis!Share to TwitterShare to FacebookShare to Pinterest

See also, the Round Mounds blog in the sidebar.

It appears the archaeologists have already been able to reassemble the necklace and have said it is crescent shaped, though the final assembly has not been publicized.  Jet black seems to have been a luxury item worn by women during the Beaker period, mostly in Britain, and then mostly in Northeastern Britain.  The archaeologists seem to think this material made its way from Whitby, North Yorkshire. 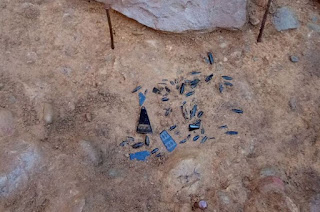 This is an important find for understanding the Beaker period of the Isle of Man.  For one, it shows that the people living on Man were more connected to the outside world than previously thought.  Importantly for Man is the fact that they have skeletal remains of a (probable) Beaker for the first time (the other burials have all been cremations).  This individual (maybe a woman) may answer some questions about the settlement of the island and the integration of the previous natives if her ancestry is significantly mixed, or not.  There appears to be an isotope and DNA analysis underway and that will be huge.


The Berk Farm necklace really changes how prehistoric Man may be viewed in the context of the neighboring islands.  These people were wealthy enough, or shallow enough, to desire fine things from distant places.  Or maybe they were just shallow people from distant places.  Isotopes may tell.

Posted by bellbeakerblogger at 9:48 AM 3 comments:
Email ThisBlogThis!Share to TwitterShare to FacebookShare to Pinterest
Newer Posts Older Posts Home
Subscribe to: Posts (Atom)