Mount Pleasant may have been built in 35 years, like so many of these expensive projects, right on the cusp of the Beaker invasion of Britain.  (Soft Language option available here.)

In "Tempo of a Mega-henge", Greaney et al. consider the flurry of mega-project activity in relation to the subsequent appearance of early Beaker pottery and monument vandalism.  Suggesting somewhat indirectly, a prelude of apprehension on the landscape.  Or, using my words, possession insecurity, invasion anxiety or perhaps even a "siege-mentality".  This is not an insignificant question as the entire archipelago was followed by several centuries of immigrant implantation and foreign cultural ascendancy.

The "positive structures", as Antonio Valera terms, might then be evidence of a deeper psychological need to strengthen entitlement to ancestral lands, marking the landscape as the established domain of a people, living and dead.  Legitimate title being conveyed from the ancestral to the living, reinforced by increasingly permanent memorials and spiritual monuments.

Once thought to be an evolution of hundreds of years, Mount Pleasant was one of many British and Irish sites built very quickly:

The estimate for the construction of the Mount Pleasant palisaded enclosure, 2530–2465 cal BC...places it firmly within the currency of large timber palisades constructed across Britain and Ireland in the late Neolithic...tightly cluster in the centuries around 2500 cal BC. These date estimates do not support previous suggestions that enclosures with continuous ditches developed out of earlier enclosures with well-spaced individual posts

and using an illustration from Stonehenge, by coincidence:

The evidence from Site IV [the probable vandalization of Stonehenge by early Beakers] raises interesting questions about the relationship between those people involved in frenetic and labour-intensive monument construction [Groove Ware folk] and the arrival of Beaker-using people.

We cannot know what native Neolithic peoples thought of Beakers or why they increased building activities toward the end of the Neolithic.  Were projects simply one manifestation of a local prosperity that attracted immigrants?  Or do the monuments represent a psychological reaction to disruptions in the continent?

One way to analyze the behavior of Neolithic building projects is to approach it from the aspect of evolutionary psychology.  I've discussed such pre-programmed behaviors here an here.  How humans create defensible space and territoriality is part of the basis of environmental psychology.

We impose our claim to spaces with artifacts of our belonging.  Whether it's piling stuff on your desk at work or leaving a jacket on a diner's table while you head to the restroom; we derive these behaviors from our animal programming, not from cognitive thinking.

We leave our jacket on the table by building intrusive, fake islands in the waters of other nations to claim oil and gas.  Planting a flag on the moon, repurposing religious spaces into that of a foreign religion, destroying and cultivating outright.  There's no shortage of examples, from Jerusalem to Azerbaijan, New World, Old World.  Claims, identity and security are projected on to the landscape. 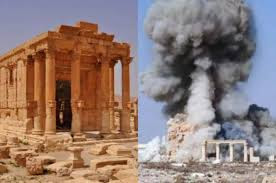 The most beastial example of this being when insecure people feel they must destroy our ancient heritage when it conflicts with their shit ideology in a new territory.  We remember the destruction of the Buddhas in Afghanistan.  Certainly repurposing, rearranging and outright destruction of sacred spaces was occurring in the Early Bronze Age.  Beakers were no stranger to this; vandalizing the sacred spaces of others.   Rearranging, repurposing. and probably, ancestral appropriation.
While it can be true that these development campaigns reflect the personal wealth and technical developments of these societies, it may also be true that Islanders, and indeed Atlantic Europeans, were deeply unsettled by changes in trade, religion and immigration. Maybe these great structures are more appropriately "monuments of fear".
Tempo of a Mega-henge: A New Chronology for Mount Pleasant, Dorchester, Dorset

Radiocarbon dating and Bayesian chronological modelling have provided precise new dating for the henge mon- ument of Mount Pleasant in Dorset, excavated in 1970–1. A total of 59 radiocarbon dates are now available for the site and modelling of these has provided a revised sequence for the henge enclosure and its various constituent parts: the timber palisaded enclosure, the Conquer Barrow, and the ditch surrounding Site IV, a concentric timber and stone monument. This suggests that the henge was probably built in the 26th century cal BC, shortly followed by the timber palisade and Site IV ditch. These major construction events took place in the late Neolithic over a relatively short timespan, probably lasting 35–125 years. The principal results are discussed for each element of the site, including comparison with similar monument types elsewhere in Britain and Ireland, and wider implications for late Neolithic connections and later activity at the site associated with Beaker pottery are explored.

Posted by bellbeakerblogger at 1:55 AM
Email ThisBlogThis!Share to TwitterShare to FacebookShare to Pinterest