That's a word, like some kind of noun or something.  Let's extend further out on the ice.

If Nordwestblock was a thing, a real thing, then what are the implications of Low Country Beakers storming the beaches of Britain?

I'll put money on the table that Islanders spoke a language akin to the big, Tang-colored area in the map below.  Linguists studying the proto-historical Low Countries up to the Elbe don't seem too keen on it ever having been part of the Celto- or Germano-spheres.

Different solutions have been suggested, but the most plausible is something kind-of... Venetic-ish.
That would mean Celtic replaced an Indo-European language in most areas; but when would this have happened?

The swift Urnfielders seem plausibly porto-celtic, or at least they roasted the European landscape in advance of the swifter Iron Age Celts. I would assume that the Celtic spoken in the Islands today has a heritage in that epoch, maybe as late as the LeTene era, but probably around the time cremation becomes the fad.

The Beakers are just too ancient to be associated with this or that.  Probably they are all of the above.

Posted by bellbeakerblogger at 11:14 PM 10 comments:
Email ThisBlogThis!Share to TwitterShare to FacebookShare to Pinterest

I can't understand a freaking word of the video, but they speak of and show glockenbechers at the gravesite and in a box of fragments.  If any of this makes sense to you, please share in the comments.


Here's the video on Hesse by Hessenschau.  I believe the above is a woman and a child.

German documentaries on Bell Beakers always have the ominous background music with a burning map.  Awesome!

And some text to go with it [here].


They suspect plague or flu wiped out a family, but DNA is submitted to be sure how these folks relate to each other.  I'm not sure who the other 18 individuals are, and older layer?  Other Beakers?  Hopefully a German speaker can clarify.


Don't get too wrapped up in periodization or dating.  It's a news article.


This is in Hanau-Mittelbuchen in Hesse, West-central Germany.  The cemetery is a rescue work so the archaeologists are running to get everyone out of the ground before the housing development goes up.  I guess that's the nature of the beast in a place like Europe.


Posted by bellbeakerblogger at 8:58 PM 3 comments:
Email ThisBlogThis!Share to TwitterShare to FacebookShare to Pinterest

There might be two hundred or more Bell Beaker 'beaker' styles depending on how nuanced you want to get.  I've never bothered to make a list, but that would be an interesting blog post, right?

Anyhow, to answer a comment from David, I thought I'd post this chart of the 'Dutch Model' in "Background to Beakers: Background to Dutch Beakers" by Harry Fokkens.


David's question is whether All-Over-Ornamented (AOO) and All-Over-Corded (AOC) beakers are Single Grave beakers or are they Bell Beaker beakers.  Fokkens explains this in a way that 'finally' makes sense, you might say. 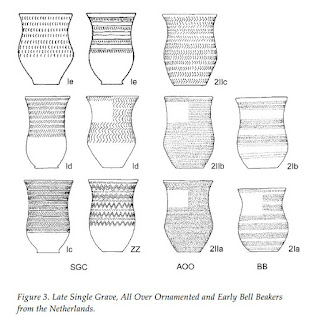 "One of the key elements in the typological discussion is the position of the 'pan-European' or 'maritime' Beaker (type 2Ia in the Dutch sequence) and the position of AOO/AOC pottery as a go between Bell Beaker Culture and Single Grave Culture.  The first point to make is that following Lanting (2008) the Bell Beaker sequence in the Netherlands starts with the maritime Beaker (type 2Ia).  Confusing for scholars outside the Netherlands, this implies that AOO/AOC Beakers are not considered to belong to the Bell Beaker Culture.  Drenth and Hogestijn consider them late Single Grave Beakers (e.g. 2006).  Lanting prefers to give AOO Beakers a separate place between both groups (Lanting 2008, 16), like also Van der Waals and Glasbergen (1955) did.  They indicated AOO pottery as 'hybrid' beakers because they combine decorative elements of both the SGC and the BB group."

The answer is that it is controversial.  Dutch archaeologists see Beaker pottery mostly developing in the Netherlands.  Mainstream opinion is less convinced of the primacy of the Netherlands in developing the Beaker package or maritime style.

If you're late to the discussion, this started last week with statistical analysis at Eurogenes "Dutch Beakers like no Other Beakers"

Related to this is the Dutchness of British Beakers in genes and culture, and what does it mean when a British Beaker is strongly reminiscent of SGC culture?
Posted by bellbeakerblogger at 4:03 PM 12 comments:
Email ThisBlogThis!Share to TwitterShare to FacebookShare to Pinterest

"No Wait, This is the Real Ava!" - Smithsonian

You'll remember Ava, one of the most diligently studied and interesting Beaker women ever.  Now with ancient DNA it is revealed her hair was straight and dark.  Update!

I think any aspiring archaeologist should look to Maya Hoole as an example as how things should be done.  Many times over.  You take something ancient and you learn as much about it as is humanly possible and don't stop.  Respect and humanize the people you study and let the facts do the talking as the picture develops.

Many thousands of Beakers sit on the shelf; shoveled out of the ground by dudes with a coiled whip on the belt.  Ava was no warrior; her grave contains no copper or gold.  Her grave was nearly forgotten.  Now she is the most interesting woman in Britain.  The face of the mysterious Beaker Enigma.

"One of the Beakers DNA Tested"

"Ava of the Highlands"

Posted by bellbeakerblogger at 12:21 AM 5 comments:
Email ThisBlogThis!Share to TwitterShare to FacebookShare to Pinterest
Labels: C

Since there's some interest in comparing Dutch and British Beaker genomes, I'll start with some excerpts from Alison Sheridan's chapter entitled "Scottish Beaker Dates: The Good, The Bad and the Ugly".

"This Dutch-style Beaker [11.9 AOO herringbone low-carinated beaker] was found in a Dutch-style grave, with a penannular ditch and a central rectangular grave-pit, the grave being covered by a small, low mound of large pebbles...The acid soild had destroyed all traces of the associated, E-W-orientated body, which had been buried in a very thin coffin, possibly...as its excavators pointed out... is reminiscent of that associated with Protruding Foot Beakers in the Netherlands."

I'd suppose that other low-carinated beaker burials would have similar profiles to this dissolved grave at Newmill, Perth & Kinross, such as I5367 Sorisdale on Coll.  Maybe Scottish Beakers are a suitable proxy for PFB's?  I was surprised that these guys weren't popping out a few typical CWC lineages, but that isn't the case yet.  Sheridan gives another examples of a CW-looking pots, such a Biggar Common on page 104-105, but notes that Sorisdale is the only example with human remains of these early Dutchmen in the Northeast of Scotland using Needham's scheme.  (see also Upper Largie and Dutch-Scottish connections during the Beaker period - Sheridan)

Sheridan speculates the earliest pioneers aren't well represented by cist graves which is why the style sequence should have a bit more weight in determining the earliest immigration.

"The second is that the dating evidence now available confirms earlier suspicions (as expressed, for example, by Ian Shepherd in 1986) that there had been a design influence from the Netherlands to north-east Scotland during the last three centuries of the third millennium - in addition to any previous Dutch (or other Continental) influence on Scottish/British beaker design."

"Clarke and Case (e.g. Case 2004) have argued for a possible lower Rhine conduit for the ultimately north European fashion of using battle axeheads as grave goods; and Needham has argued for the presence of a Veluwe-style Beaker, along with a tanged copper knife closely comparable with Dutch examples, at Shrewton"

The paper is worth reading several times over for a picture of Scotland.

A few excerpts from Sheridan in "Upper Largie and Dutch-Scottish connections during the Beaker period.  [Also a quite note, Sheridan mentions on 254 that Sorisdale is isotopically an immigrant and the geology of the Netherlands cannont be ruled out]


"The Beaker grave at Upper Largie represents a striking novelty in funerary practice and associated material culture, owing nothing to pre-existing traditions in Scotland.  While it stands out as being different from most Scottish Beaker graves [and the earliest]... several of its features immediately recall Dutch funerary practice of the mid-third millennium BC... The practice of burying the deceased in a timber chamber or coffin in a pit... ring ditch...posts in fill....round barrow... [shortening comments].... is characteristic of the Single Grave Culture which preceded the Bell Beaker Culture, but whose traditions persisted into the latter, in the Netherlands.  [shortening again]... points forcefully to the Lower Rhine Basin."

The arguments made by Sheridan in this paper are difficult to condense, but here's from the conclusion:


"The fact that the early Beaker period graves described above represent such a striking novelty within mid-third millennium Scotland, and point so forcefully towards the Netherlands as the place of origin for their occupants, raises the very real possibility that we are dealing with Dutch immigrants during or around the 25th century BC.  Of course, the idea of incoming 'Beaker people', for so long unfashionable in Britain, has been revived by the evidence from the famous 'Amesbury Archer' in Wiltshire, who appears to have been and immigrant from central Europe, possibly Bavaria (Fitzpatrick 2002)."

Posted by bellbeakerblogger at 9:22 AM 13 comments:
Email ThisBlogThis!Share to TwitterShare to FacebookShare to Pinterest

This paper was mentioned over at Eurogenes.

"It seems vain to want to comprehend all the Bell Beakers manifestations in a single theory."

That's from Oliver Lemercier, 2018.  Local Data and Global Perspectives in Bell Beaker Archaeology in the Journal of Neolithic Archaeology.

There is an ironic and inverse relationship between knowledge and theory when it comes to the Bell Beakers.  The more you learn about Bell Beakers, the more difficult it is to make bold declarations.  I believe it was Turek that said this mystery isn't because Beakers were unusual people or something, but because they lived so long ago and left us no written account of their civilization.  So we have to guess at why they did the things they did, why they married who they did, what they spoke, and who they worshiped.

If I remember correctly, Lemercier has read, studied or collected an enormous body of documentation produced on the Bell Beakers; I recall it being several thousand documents.  Remember that much of the primary research on Beakers is documented in twenty-something languages spanning a century.  There's a lot out there.  So when Lemercier says 'it ain't that simple people', he has my attention.

Anyhow, that map above is amazing in the sense that the 'phenomenon' had such a wide arc of influence, even on very distant cultures.  The Beaker stylistic influences actually go beyond the yellow peripheral areas in theory.

While a single theory of their development and motivations may be impossible, some basic statements can be said of their civilization, see Czebreszuk

Posted by bellbeakerblogger at 7:45 PM 21 comments:
Email ThisBlogThis!Share to TwitterShare to FacebookShare to Pinterest

My new year's resolution is to outnumber previous blog posts by half!   Let's see what happens. 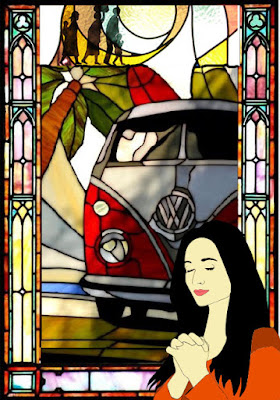 The advent of ancient DNA comes at a precarious time in European history.  Does migration mean nothing?  It looks as if European archaeology is struggling greatly with the facts on one hand, and an ideal on the other.

Expect a year of heated discussion, and more Beaker graves!

Posted by bellbeakerblogger at 4:04 AM 16 comments:
Email ThisBlogThis!Share to TwitterShare to FacebookShare to Pinterest
Newer Posts Older Posts Home
Subscribe to: Posts (Atom)