Phillip Stockhammer looks at the patterns of social position among women within the Lech Valley farmsteads.

He makes a fairly compelling case that some of these imported women were wet nurses.  All women are non-local, but the mistresses are less non-local than women in servitude.  Or however one wishes to phrase it.

Posted by bellbeakerblogger at 4:59 PM 2 comments:
Email ThisBlogThis!Share to TwitterShare to FacebookShare to Pinterest

Here's the only Iberian halberd deposited in context as part of the warrior package.  It's context is discussed in "Atlantic Halberds as Bell Beaker Weapons in Iberia: Tomb 1 of Humanejos (Parla, Madrid, Spain)"

Although quite a few halberds are found in scattered and wrecked contexts, it's rare to find in a grave.  It may well be that elite tombs were more susceptible to plunder and vandalism and so halberds might be under-represented for that era.  The authors point out that halberds were Europe's first metal-conceieved weapon.

The weapon below appears to have been repaired many times after impact.  The first indication is that it was re-hafted several times due to blunt force.  The most recent hafting involved substituting a nail for a rivet.  Clearly it was not a letter-opener.

Tomb 1 is located near Madrid and features a man and woman.  The tomb had an entrance and was not filled in, so the woman's body had already decomposed before her husband (?) was laid to rest.  Her body was "scooted over" and the authors suggest the ivory buttons from her vestment might have been collected in hand to her pot. 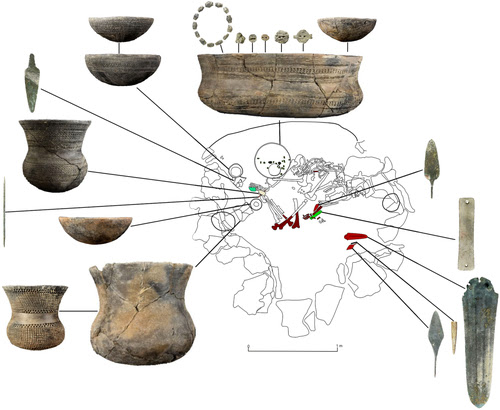 There's several things that come to mind with halberds.  One is that they may be indicative of social rank, perhaps as part of a social division of arms (Meller, 2017).  At the same time, these weapons were used a lot and the use-wear suggests more than (Horn, 2017) some domestic chore like punching holes in domestic cattle skulls.

Reverse-engineering needs requirements takes us to an interesting place in Beaker warfare.  We have long-range weapons (at least two types of bows), a personal space and dualing fighting weapon (daggers), beyond arms length offensive/defensive weapon (the spear or javelin).  And then we have this weird, centrifugally accelerated, blunt force weapon.  Why?

I think it's probably an indication of primative armor and sheilds.  Of course armor of that time would have been boiled leather and probably quite effective.  The real question is that if a halberd is nothing more than a dagger on a stick, then why position it at 90 degree angle?  Without the need for penetrative force, there is no advantage for killing someone extra.

Use-wear and common sense point to a rotation plane, something like an axe or hammer.  That means a halberd point is approaching a victim with multiples of speed and force than would be required if we are simply dealing with defenseless, naked humans.  It's like shooting someone with a bazooka.  Is shooting someone with a bazooka as effective as a rifle?  Yes, same result I guess.  But we would correctly suppose that a high-cost, single-shot, shoulder-fired weapon like a bazooka was developed to bust armor.

If all the above is true, we have a new problem.  Being equipped with a Palmela point makes sense if we are dealing with a warrior on foot who can punch a spear beyond arms length.  But this warrior is equipped with both a halberd and two points.  I doubt the mourners just threw a bunch of man stuff into a grave.  Could it be that the Palmela point (having no barbs mind you) was specifically used in equistrian combat?  Similar weapons were used in the Medieval period simply for punching sorry souls on the ground by mounted warriors. 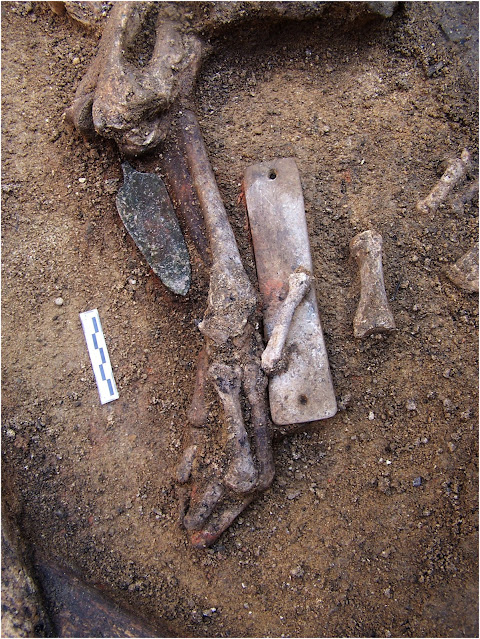 And finally, another clear example of a "bracer" that fell off the outside of a decomposing arm.  I think at this point we can safely say that these are not actually bracers but an exterior (or sometimes interior) backbone of a larger bracing cuff.  Maybe this was to protect the wrist from injury to to relieve stress on the lower arm.  Who knows.