Who lived in Ireland before the Bell Beaker invasions and settlement?


Unfortunately, the Lara Cassidy paper on Ireland's genetic history is now embargoed.  But it will interesting to read that paper with this linguistic question in mind:

"why are there typological similarities between Insular Celtic and Afro-Asiatic?"


Cassidy at Eurogenes.  Hopefully someone will send me the PDF, but until then, the question...

The mainstream view is that the Celtic entered the Islands in the LBA with the IA representing its cultural apex.  Population movements certainly spread this language, but genetic continuity would suggest that Bronze Age natives would have learned Celtic (as a new dialect or a new language)

Before the Celtic invasion, the Island of Britain probably spoke a number of languages related to those of the Low Countries (certainly some kind of LLPIE, possibly the speculative Nordwestblok).  But Ireland may be another story as its ethnic enclaves were more choppy, with strange menages of new lifeways and ancient craft traditions.  (food vessels as one example)

We think of the modern Irish as supremely North European with high frequencies of new traits associated with Bronze Age population movements.  But we must remember that this was a long and cruel process on a little Island.  A little Island that spent a lot of energy harassing and conquering the West Coast of the big Island.  We have to be careful looking at Bronze Age Ireland though our modern prism of Celticity.

If Late Neolithic Irish tended toward the more Levantine variety of Farmer, and if they survived in any significant numbers to the MBA in Ireland, then it is well possible that portions of the LBA Irish population were learning (or mangling) Continental Celtic from the aspect of an Afro-Asiatic thinker.

1. Western European farmers descend from two major ancestral epochs/bodies
a.  Danubian farmers originating in Anatolia and SE Europe that were variously mixed with Hunter-Gatherers (these are the I2 and G guys and are the majority throughout the continental heartland)
b.  Maritime farmers originating in Syria that dot the littorals and river valleys across North Africa, parts of the Northern Mediterranean, and parts of the Atlantic facade to Ireland  (these are possibly the carries of R1b-V88 and E1b among others)

2.  Although Bell Beakers (probably IE speakers) pummeled most of the large Island, the Irish Sea and Ireland itself may have been more patchy in settlement where Neolithic cultural ways and ethnicities lingered and inter-married through the Early Bronze Age to Middle Bronze Age.

3.  The bastard Celtic of the Irish Sea and Southern Ireland came to dominate or influence all of the Islands throughout the Iron Age, so what happened on the macro level doesn't matter anyway.

4.  Insular Celtic was spread by Irish Bastards with daggers and swords.

Let's get down to the very dirty business of Bell Beaker bracers.  Simple?  Nothing is simple.

This is a paper by Clement Nicolas that re-attacks this issue.  Worn on the inside of the arm with use-wear?  Nope.  Try again.

Nicolas confirms Harry Folkiens' observation that these wristguards (bracers) were indeed most likely worn on the outside of the arm.

Since we're on the subject of mounted warfare this week, let me shamelessly promote my own (more recent) hypothesis, because I think the cockstrutting explanation is weak.

I believe these archery stones were used to steady the arm by mounted archers.  There's a popular Youtube Blogger, "Survive the Jive", that promoted my theory along with a graphic I made for Jessica Ryan's paper on enthesial skeletal changes... (click and wait a few seconds)

I think as we look at the Fages et al paper (Eurogenes), or the Harald Meller paper, or the skeletal indications of an archery culture (Ryan), we're looking at mounted infantry, calvary, or at the very least a culture of mounted warriors that is very unique in the history of Europe.

The Prince of Leubingen by Karol Schauer 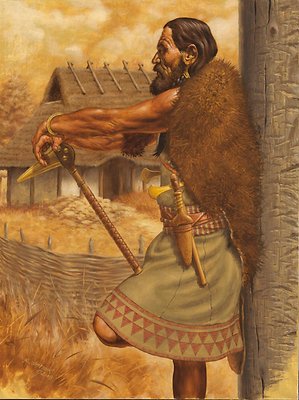 I really like how Karol Schauer imagines the clothing and accouterments.  It's a good transitional mix for the time, things old and things new.

This chief appears to have been able to muster quite a few fighting men.   He was the local honcho.
Posted by bellbeakerblogger at 3:27 AM No comments:
Email ThisBlogThis!Share to TwitterShare to FacebookShare to Pinterest

In essence, you slap the clay as you were taught by your mother, shocking to people who fried their brains in the 60's.

"The question here is therefore: does the site of Sion ‘Petit-Chasseur’ present arguments in favor of a division or of a continuity between the Final Neolithic and the Bell Beaker Culture?Pottery technological traditions can assist with this answer. As we described earlier, Bell Beaker pottery revealed manufacturing and finishing techniques that contrasted strongly with the ones that we found for earlier periods. "

"To sum-up the results of our technological analysis, each period demonstrates a different chaîne opératoireAfter reexamining the site’s history, we found four additional indications of disruption linked to the Bell Beaker phases. The first one appears in the architecture of the dolmens and cists built after 2450 BC. Indeed, unlike their Final Neolithic predecessors, they did not feature a triangular base; their burial chamber stood alone. The breaking of the “type A” stelae and their use to build the first Bell Beaker monuments marks a second change. Their systematic destruction, with a particular emphasis on the heads, could be a powerful sign of rejection towards the preceding individuals buried in the necropolis (Harrison and Heid 2007, p. 151). A third sign of a shift is the erection of a new type of stela, “type B”. These stelae’s anthropomorphic features were exacerbated and engraved with specific patterns. Representations of bows and arrows, weapons never before depicted, replaced those of Remedello daggers (Gallay, 1995, Harrison and Heyd, 2007). The last indication of disruption is the level 5B of dolmen MVI – here marks a caesura as the Final Neolithic remains and their accompanying grave goods were thrown outside of the structure to allow for the first Bell Beaker funerary deposit (Bocksberger 1976 vol 1, p. 144).

"Nonetheless, Bell Beaker populations used the same necropolis and perpetuated the tradition of stela-engraving, and some researchers have claimed that these elements “must be understood as part of a millennial tradition of respect for the site, and an intense desire to use its monumentality as a means of social validation for the community, by those who believed they were its legitimate heirs and successors.” (Harrison and Heyd 2007, p. 185).We thus conclude that a significant break in pottery traditions happened with the emergence of the Bell Beaker Culture. As strontium isotope analyses previously suggested (Desideri et al. 2010), this break was most probably linked to the arrival of foreigners, either a few individuals or a larger group, whose geographical origin remains unclear."


Pottery technology as a revealer of cultural and symbolic shifts: Funerary and ritual practices in the Sion ‘Petit-Chasseur’ megalithic necropolis (3100–1600 BC, Western Switzerland)


Abstract
Research on the third millennium BC in Western Europe has tried for decades to understand the mechanisms of the large-scale cultural changes that took place during its course. Few studies have focused on technological traditions, although these are key to considering continuities and disruptions. In this article, we used pottery technology to approach the evolution of social and symbolic practices at a major megalithic site in Switzerland: the necropolis of Sion, Petit-Chasseur (Valais). We reconstructed technological traditions for the Valaisian Final Neolithic (3100–2450 BC), the Bell Beaker Culture (2450–2200 BC), and the Early Bronze Age (2200–1600 BC). This was done using the chaîne opératoire approach, analyzing fashioning methods, finishing treatments, and decoration. The sequence of these technological traditions, along with architectural and historical aspects, confirms that significant breaks happened during the use of the site with specific traits coinciding with the emergence of the Bell Beaker Culture and then again with the Early Bronze Age. These findings support the idea that the transition between the Final Neolithic and the latter periods marked an important cultural and symbolic shift in Western Europe and that this shift was, at least in Western Switzerland, linked to several exogenous components.

First, the prominent of the two burials is well equipped.  Whale-bone pommels on his copper daggers?  The chief appears to have been buried with at least four cowhide blankets.

One grave faces this chief in a crouched position, but he is in a 'frog pose', supposedly sitting upright in lotus-like position (although the description is not very good).

The crouched man, "the shaman" (about sixty), faces the younger "chieftain"(about 40) and archaeologists suspect that the older man was ritually sacrificed for the younger.

"Did ancient Britons commit human sacrifice in Gloucestershire? Bronze Age chieftain is found alongside 'shaman' who may have been killed to accompany him into the afterlife"
LiveScience 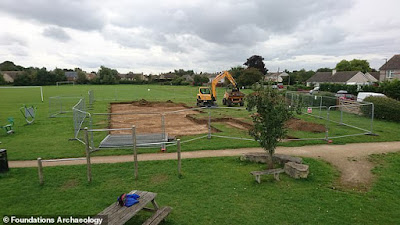 Frog Pose or Yamna Respose?
Posted by bellbeakerblogger at 3:11 AM No comments:
Email ThisBlogThis!Share to TwitterShare to FacebookShare to Pinterest
Newer Posts Older Posts Home
Subscribe to: Posts (Atom)