After the previous post "Iberians in Suprasl?", someone sent me this recent paper, "Paleoclimate and Cultural Genesis in Eastern Europe at the End of the 3rd Millennium B.C." 2018 by Roman Mimokhod.

The question is, if Beaker influences in the SW Baltic now have the option of transmission from actual immigrants rather than chain transmission through intermediary cultures, should we more carefully consider that other peripheries expressing Beaker characteristics may have also recieved direct immigration?

To put another way, given that we have ample proof that Beakers travelled very long distances in a single lifetime (perhaps even within a few weeks), and given their lack of respect for any sort of boundary (geographic, tribal, climatic, linguistic, moral), and given their propensity to dot regions with outposts in the backyards of native cultures, is it not simpler to assume peripheries with Beaker influences had local Beaker settlers, or at least traders, prospectors, marriage partners?

How about the Middle Volga?  How about early Abashevo? 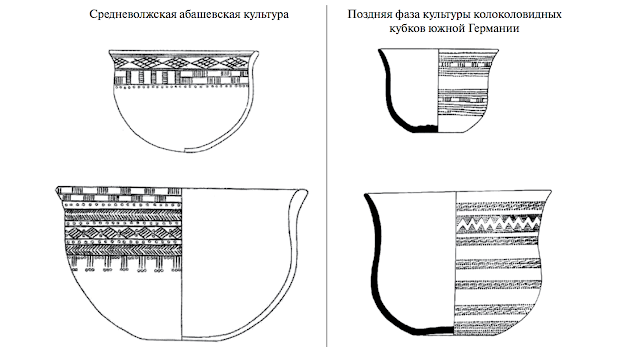 This is not to suggest any part of the Abashevo Complex should have any significant Beaker ancestry.  If it did, it would surely be a fraction.  Rather, the point here is identifying those attributes that remind us of the Beaker Culture and trying to understand how these elements surfaced in such a far away place.

Beaker settlements in the Ukraine/Southern Russia should not seem too absurd; as I have suggested before, their migration does not appear to have been a mindless process, like a liquid spreading equally in the absence of resistance, seeping into every crevice along the way.  Their earliest presence in any area appears to target raw materials or favorable positions.

There is no doubt that migrations from Central Europe laid the foundational layers for the rise of Abashevo.  Did cultural Beakers migrate?

At the end of the 3rd millennium, a block of post-catacomb cultural formations was formed in Eastern Europe on the genetic basis of catacomb cultures. It consists of the Babino cultural circle and the Lola cultural circle. The first of them was formed due to the migration impulse from Central Europe and the Carpathian-Danube region, the emergence of the second was stimulated by the migration of pastoralists of the North-Eastern Caucasus to the Ciscaucasian steppe. In turn, the movement of population groups from Europe led to the emergence of a bright, distinctive Middle Volgian Abashev culture of a Central European appearance. Large-scale migrations in Eastern Europe XXIII / XXII centuries. BC. coincided with the peak of aridization in the Old World. These two phenomena are in a causal relationship.

Posted by bellbeakerblogger at 5:32 AM
Email ThisBlogThis!Share to TwitterShare to FacebookShare to Pinterest