[Lactase Persistence] we find it at most at low frequency in the Bronze Age (10% in Bronze Age Europeans; Fig. 4), indicating a more recent onset of positive selection than previously estimated

Really?  Mathematically, how does this work?  Everyone on planet Earth should be Lactase Persisent using this weird logic, really weird logic.

Were talking about about 400 generations on one hand, on the other hand a crises in the sustainment strategy or infant rearing customs so great as to winnow lactose intolerance almost completely from some parts of Europe (ie. the Bell Beaker parts of Europe).  There simply was not any event or factor that contributed to the modern frequency other than migration, founder effect and the growth of that particular population.

Really, there are two arguments here.  One is positive selection on steroids, which is ridiculous given the fact that non-LP people seem to be having plenty of babies.  The other is continuous or severe culling, and that just doesn't seem to fit anything that is known of the Bronze Age forward. 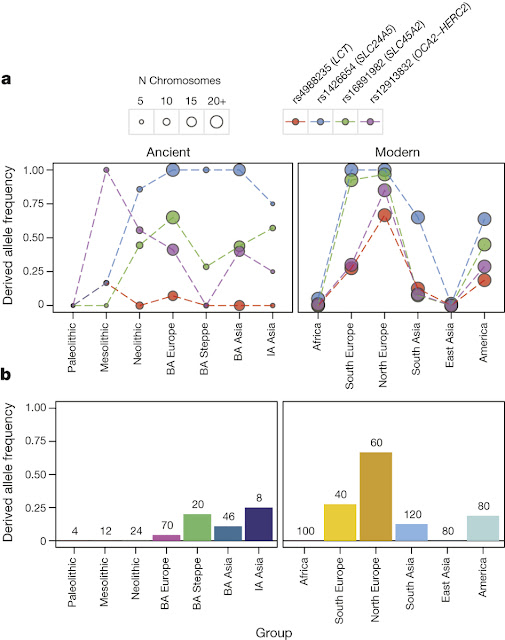 
You might remember this "Guess What!? LP Allele Not Under Selective Pressure"  Obviously, the derived allele comes from Central Asia, probably in the Paleolithic.  I would take a wild guess that LP is associated with the earliest users of lactating domesticates, possibly the nanny goat for babies and cow's milk after 1 year of age.