Mike Maglio argues in this paper that R1b does not have a deeper structure in the Near East than it does Western Europe.  From his point of view, most of the Near Eastern/Middle Eastern R1b could be attributable to Turkopoles (or Turk-child, sons of the Crusaders). 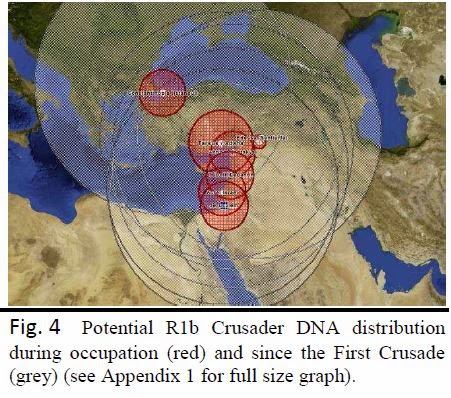 First, I always appreciate someone who can upset the applecart of uncritical thinking.  People are way too comfortable with the usual conventions.  He does have some valid points, one being that R1b was apparently flung at the map with little perceivable evidence of its past.

I don't know enough about the more basal twigs of R1b's tree, so I can't really speak to his methodology.  However, the conclusion is supported by a weak argument, I think, basically that an historical event saturated the region with DNA from Northwestern Europe.

I take issue with the logical tool known as the proverbial "black gladiator" being used to explain away minority haplogroups in any one region.  A lot of people use this device and it drives me bananas.

There are several reasons to believe that the R1b we see in places like Lebanon, Syria and Iraq is indeed pre-historical or proto-historical.  One is the percentages roughly square to the overall picture of R1a and R1b in the surrounding regions.  Whether its Bedouins, Azerbaijanis, Iranian Assyrians or Kurds, both R1b and R1a are omnipresent in any population from Baluchistan to Sudan and this definitely isn't due to Crusading.  [See here]

Second, the Crusade entourage to the Middle East was overwhelmingly from the incestuous French landed classes.  As we saw from Richard III's recent DNA, the nobility wasn't uniformly R1b.  It would appear possible or likely that the Plantagenet patriarch, Fulk V was G2a.

The French nobility could possibly be described as a combination of  "Scandinavian" and "Pyrenne".  I could be wrong, but I really don't see this type of paternal ancestry among the referenced populations.  At the macro-level, compared to the surrounding populations, even less so.