I've just read an interesting paper about the incomplete jet necklaces worn by EBA women in Britain.  Some plausible theories have been put forward (Ann Woodward, Alice Sheridan) to suggest that beads were removed from old necklaces and given to daughters, cousins, good friends.

It seems that Beaker/EBA jewelry and adornment was sexually dimorphic (Alice Rogers).  The metaphorically black, moon-form necklaces appear to have been worn by women and strongly resemble the golden lunulae in decoration and form.*  Catherine Freiman looks at the deposition practices of these items, finding that they are usually under-complete, over-complete or mixed in burials: 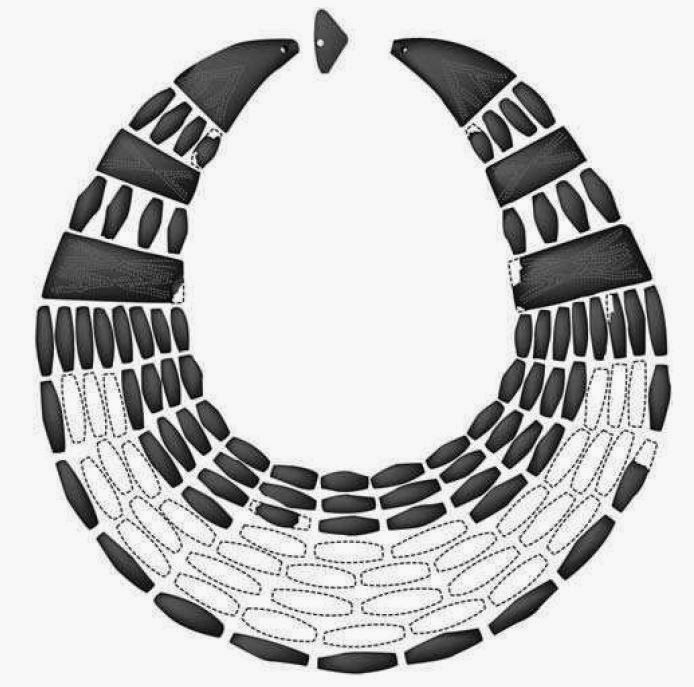 "...in stringing these beads into complete necklaces, we add a layer of interpretation that affects how we see the individual beads...second, that many of their individual beads appear to have been crucial to determining the value of the whole ornament."

It's tempting to view the deposit of a lone bead as a stray or assume the incomplete necklace as a consequence of everyday wear.  Looking closely however, it appears that division and combination was intentional and common:


"...the apparent incompleteness...is, in fact, a necessary feature to study if we want to understand their value to the people who made, used and deposited them."

"While wear traces show these bead assemblages to have generally been strung tightly (Sheridan, pers. comm.), the presence of composite necklaces and heirloom beads means that, at times, the individual beads within a given assemblage were separated and handled."

Single beads of other materials appear frequently in other places and contexts.  Two schist beads and two axe heads in a similar Suprasl-styled pit from Los Tiesos I in North Central Spain.  An Iron Age woman from Denmark was discovered having a single glass bead.  A single bone bead in a woman's collard urn in Roxton, Bedfordshire.

It was common in colonial America to have remembrance rings funded through a person's estate for nephews, cousins and good friends.  Wedding, engagement rings are thankfully still common, however friendship rings have become less common.  Before the age of costume jewelry, earrings, bracelets and necklaces usually had some special meaning for the giver and the wearer.  It is very easy to imagine jet and amber necklace beads having strong sentimental value because endless examples can be shown in historical Europe.

It this context, it makes you think twice about the lone amber bead deposited in Suprasl's ceremonial pit.  It would almost appear that either someone was commemorated or it was a bodiless funeral.

*Freiman suggests that jet spacer necklaces and golden lunulae do not overlap geographically in Britain.  This is a bit of a puzzle since lunulae appear to have been worn by warrior men in the continent and it would be reasonable to assume the golden lunulae in the Isles were worn by men (Orbliston possibly one example).  It's possible the jet lunulae from Britain are another example of the dualism in their religion.  In other words, the 'midnight' jet lunulae contrast with the 'solar' gold or amber lunulae; essentially female and male dualities as would by understood within/by their hypothetical mythological proxies [here] and [here].