The militarization of Southwest Portugal at the beginning of the 3rd millennium is a difficult subject because it's hard to develop a working narrative about how, why and who.  There's several scenarios so I'll lightly touch on those from what I've read.

Right now this paper describes remains of 30 or so forts which roughly corresponds to the region's current departments, however there may be as many as sixty when other candidates are investigated. They were built almost simultaneously using the same blueprint and on virgin sites where they are usually the first archaeological layer.

Like other forts in the South and Southeast of the peninsula, there are hollow towers and solid towers along the walls. There are at least two concentric layers, with a smaller defensive layer similar to a medieval keep. Gates are subject to flanking fire and the entire plan makes use of terrain and natural obstacles.  The builders of these enclosures were the regions first metallurgists, however they probably were not Bell Beakers.

The evolution of wall towers probably follows a period when small unit tactics had advanced to a point where walls and palisades were being effectively compromised.  The advantage of a wall tower is that the assailants become in enfilade down the length of the wall and usually by archers in two separate towers.  It's much easier for the defenders to pick off invaders with short, straight shots than to hang over the edge of a palisade and try to aim an awkward oblique shot at a column of bad guys running up a ladder.

The tower also opens up the left and right lateral limits for each archer by getting him outside the wall while the tower also moves him closer to the slope than a structurally sound wall could provide. 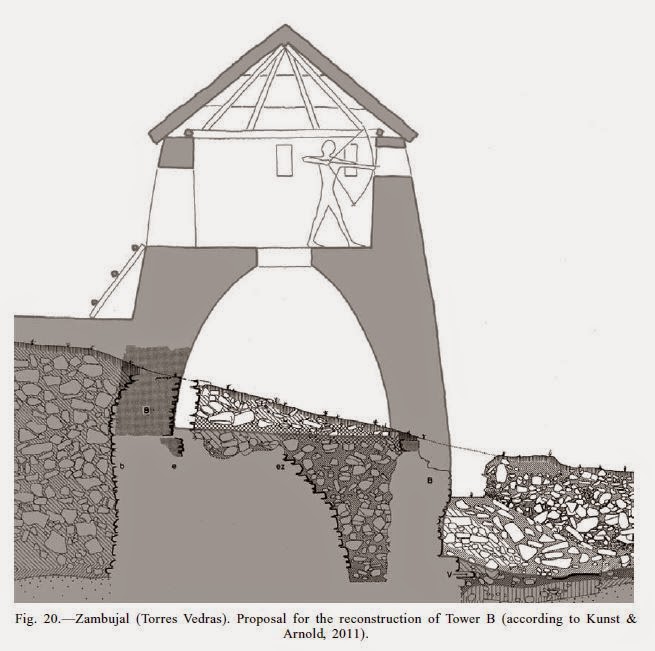 There are two modern schools of thought on the significance and meaning of the Portuguese towers.  The Portuguese school views the towers within a purely defensive scheme in which territory and routes are tightly controlled.  In this way the forts are like garrisons that project power and control over a region that was vulnerable to raiding or unauthorized trading.

The German school appears to view the forts almost as the hallmark of a predatory feudal system, with the castles being the abodes of wealthy lords who need protection against their own people.  In this way, they are indeed defense systems, but defense against internal uprising.

This is where it gets strange though.  The forts were built suddenly, probably by foreigners from the Southern or Southeastern part of the Peninsula.  These original metallurgists do not appear to have been Beakers even though this is the timeframe in which the first Beakers begin appearing.  The forts are repaired and maintained for several hundred years then are mostly abandoned.  The time period in which they are abandoned corresponds with the absolute peak in Northwest African trade.

The forts are part of a complicated time in Iberian prehistory.  It may that multiple foreign interests were targeting this region simultaneously.  One thing to remember is that during this time of economic development, trade was probably managed by strongman cartels and the volume of exotic trade in this region was heavy.

If you imagine Chalcolithic Portugal as being ruled by Central American drug lords, you are probably pretty close to the actual situation.

In relation to the question of violence in the third millennium BCE, a synthesis is presented of fortified sites situated in the Centre and South of Portugal. The analysis is divided into three large territorial units: 1. Upper Eastern Algarve, with special emphasis on the Cerro do Castelo de Santa Justa; 2. Alentejo, in particular the middle Alentejo, where some recently excavated settlements and farms are to be found (São Pedro and Porto das Carretas); 3. Estremadura, the region where there is the largest concentration of fortified settlements (currently numbering 18), with over a century of archaeological research. Four main aspects were considered in testing for the possible existence of signs of violence:  1. Models of implantation; 2. chronologies and discontinuities in the occupation of the sites; 3. Defensive architectures, especially the general ground plans, towers and gates, and internal and external reinforcements. 4. Reconstructions and remodellings. By comparing these indicators with other archaeological data, the fortifications are considered as a reaction to the violence that existed between communities, testifying to effective territorial appropriation and denoting migratory movements of the first copper archaeometallurgists originating from Andalusia.