This post follows "Reefing and Tacking from Libya to Crete" and goes along with an earlier post on  "Solar Jewelry - Mary Cahill".

Beakers traveled in logboats and cleated plankers, but there may be another boat known to them.


The Egyptian vessel I included is several centuries younger than the British lunula above, and also the type of boat differs somewhat.  There are better examples of boats with similar prows, however you'll notice some similarities between these two which will suffice... 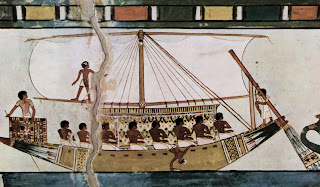 The decoration of the bow and stern is similar between the two examples.  The EBA plankers that we have were internally cleated and sewn, whereas these boats appear to be externally sewn on the bow and stern in a shoe-lace pattern or are at least skeumorphs of an obsolete design of greater antiquity.

Another interesting aspect are the high prows of the lunulae.  This seems to indicate a boat with a greater surface area above the water line and that may be indicative of how the boat was propelled.

I believe in that original paper Mary Cahill noted how the prow fans appear to have been intentionally twisted in a number of the gold lunulae that have been found.  And finally, you'll notice that all golden lunulae (I believe) lack any decoration below the gunwale [I originally spelled gun rail, intrusive 'r' I guess] on the hull.  The last evidence seems to seal the deal on lunulae being solar boats (although there are complex mythological associations between this boar's tusk, bows, the moon, etc) 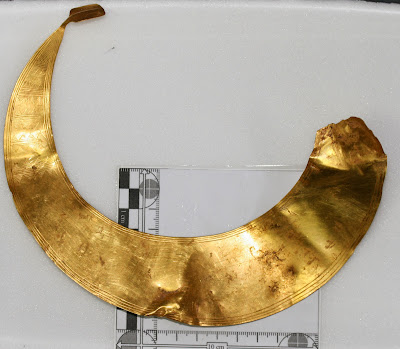 Posted by bellbeakerblogger at 11:16 AM
Email ThisBlogThis!Share to TwitterShare to FacebookShare to Pinterest
Labels: R