There's a chapter in this book by Houlbrook and Armitage I found interesting.   Two of the chapters are preview-able for free. 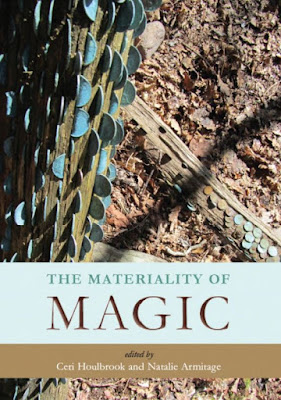 The highest order of archaeology is, IMO, to get into the minds of prehistoric people and to gain a realistic understanding of who they were.  This book talks about the material evidence for something that real prehistoric Europeans did a lot of and believed in - magic.

"The Materiality of Magic" has a chapter called 'Also found ... (not illustrated) ...': The curious case of the missing magical fossils by Peter Leeming.

Leeming illustrates a problem with a number of archaeology papers in failing to appreciate the motives of deliberate human action.  He looks at Bronze Age monuments of Britain and Ireland and finds buried, almost unworthy of reporting, the presence of echinoids (sea urchins) in graves, circles and tombs.  It seems that sometimes these are fossilized "thunderstones" and in other cases may actually have been urchin remains.

I learned something very interesting, the Amesbury Archer was buried with about fifteen sea urchins (it is not mentioned what kind).  In fact, the sea urchins in his grave were treated this way and quoted by Leeming:


Having dug a little deeper it would seem that this was possibly common, at least in the Isles.  (I also found a book that explores this phenomenon a little deeper "The Star-Crossed Stone: The Secret Life, Myths and History of a Fascinating Fossil" by Kenneth McManara)

If we extrapolate the Iron Age beliefs and meaning of this, it might point to a belief in a thunder and lightning god.  What's interesting is that a number of prehistoric motifs may mimic echninoid fossils.  The Scottish Stone Balls [2] might literally be "thunder balls" (ha ha)  Some of the spirally motifs in prehistoric European art could be more stylized or schematic versions of echinoid motifs, they having a metaphorical significance of the lightning god.


Previously I've referenced this book.  It's also a worthy reference: "Magical Medicine: The Folkloric Component of Medicine in the Folk Belief, Custom, and Ritual of the Peoples of Europe and America"  by Wayland D. Hand [Link]

Posted by bellbeakerblogger at 2:51 PM