The Hurlers Frozen in Time


This from Ancient Origins:


"Hidden Fourth Circle at Mysterious 4,000-Year-Old Standing Stones in Cornwall to be Investigated" 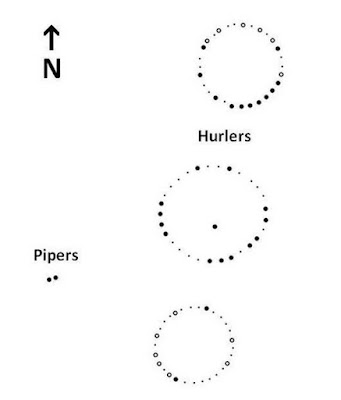 These four stone circles are located in Cornwall, the absolute southwest 'leg' of Britain. The three stone circles are called "The Hurlers" after local legend. The Hurlers were men who played hooky from church to play hurling and were instead turned to stone.  Hurling is one of the many native stick and ball games of the Isles (and it's important to point out that sometimes the names of these different games were used interchangeably)

Why would hurlers be frozen in a circle if modern Gaelic hurling is played on a square field?  Well, some of the stick ball games are played on round fields and the 17th century Cornish concept of the game may be different from Gaelic hurling.  In any case...


Also interesting that men would skip church, maybe suggesting the activity was frowned upon in the Christian view.

See also "Scottish Bowls"
Posted by bellbeakerblogger at 11:22 AM