All previous human mobility studies have compared ancient individuals directly against various geologies that imprecisely deduced that person's history of movement.  The authors spend some time describing why this is problematic, the obvious problem being that without context, the isotopic values are even more difficult to interpret.

What they do here is slightly different in that they look at the variation of an area and subtract the obvious movers (or account for greater variation).  They presume that the majority of non-misfits are local (and on predicted values by the local geology) and then create a profile for what a local of a given area looks like.  (I read it quickly, but I think that is close to the reduced version)

This is part of steady drip from the Beaker People Project. 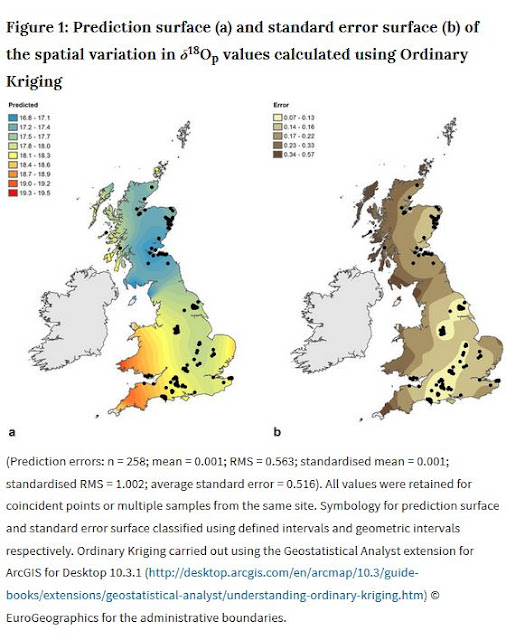 
A geostatistical model to predict human skeletal oxygen isotope values (δ18Op) in Britain is presented here based on a new dataset of Chalcolithic and Early Bronze Age human teeth. The spatial statistics which underpin this model allow the identification of individuals interpreted as ‘non-local’ to the areas where they were buried (spatial outliers). A marked variation in δ18Op is observed in several areas, including the Stonehenge region, the Peak District, and the Yorkshire Wolds, suggesting a high degree of human mobility. These areas, rich in funerary and ceremonial monuments, may have formed focal points for people, some of whom would have travelled long distances, ultimately being buried there. The dataset and model represent a baseline for future archaeological studies, avoiding the complex conversions from skeletal to water δ18O values–a process known to be problematic.

Posted by bellbeakerblogger at 7:05 PM