Here's a doctoral thesis by Christina Roth which includes quite a bit of Iberian mtdna.  The most interesting aspect of this paper concerns Beakerfolk maternal lines which presents an interesting situation.

The publish date is 2016 at the University of Mainz website.  She has been a co-author of several of the large DNA papers in the last year or so.  I believe this is includes a large amount of unpublished data, but I don't have time to look at it closely.  You can dig in at page 134. 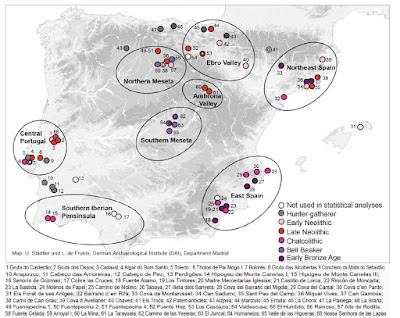 "A common feature that is shared between the two Bell Beaker groups [in the Mesetas] and that separates them from other Chalcolithic groups is the low amount of haplogroup H and the presence of haplogroup U5a, which was – apart from the Bell Beaker groups – only found in one Late Neolithic individual from Portugal and the Portuguese Chalcolithic site of Perdigões."  (remember a U5b Phoenician..)

"The only new haplogroup found in the Bell Beaker dataset was the sub-Saharan lineage of haplogroup L1b in the Southern Meseta."


Christina Roth then continues with some interesting interpretation.  In total, this part of the paper is maybe 10 pages or so, but the whole thing looks like a good read when time comes available.

"Once upon a time in the West : paleogenetic analyses on Mesolithic to Early Bronze Age individuals from the Iberian Peninsula" Christina Roth.  Mainz : Univ. 236 Seiten.  [Link]

Abstract: While the amount of ancient Iberian genetic data has increased over the last years, few studies have focused on population dynamic processes beyond the immediate period of the Neolithic transition. In this study, the Iberian dataset was enlarged by SNP-based haplogroup information for 249 new Mesolithic to Early Bronze Age individuals and 187 reproduced HVR I sequences. These new data allow confident insights into post-Neolithisation population dynamic processes on the Iberian Peninsula and make it possible to compare the development of Iberian and Central European groups over a time span of about 4,000 years.
The results of this study reveal a strong genetic regionalization of Iberian groups throughout the Neolithic and partially in the Chalcolithic. A considerable amount of hunter-gatherer maternal heritage persisted during the Iberian Early Neolithic. The greatest amount of “Neolithic” lineages/haplogroups (HV, J, K, N1a, T2, V, and X) has been found in Northeast Spain and Aragón, suggesting these regions were the main entrance for Neolithic lineages into the Iberian Peninsula, while the amount of mitochondrial hunter-gatherer influence increases with growing distance from these regions, pointing to various forms of Neolithic transitions on the Iberian Peninsula. In some areas genetic continuity between Early and Late Neolithic seems highly likely (Ebro Valley) while other regions show large genetic differences to the preceding period (Central Portugal, Northern Meseta). Central Iberian Bell Beaker groups are genetically distinct to most other Chalcolithic groups.
Although a substantial number of Early Neolithic Iberian individuals share direct sequence hits to contemporary individuals of the Central European Linear pottery culture, the amount of hunter-gatherer mitochondrial heritage is considerably greater in all regions of the Iberian Peninsula than in Central Europe. No genetic connection between Iberian and Central European Bell Beakers or the Corded Ware culture could be found. When focusing on the distribution of sub-clades of haplogroup H, differences between the Iberian Peninsula and the groups from other parts of Europe were recognizable. In the Iberian samples set only sub-haplogroups H1 and H3 could be identified. While H1 was present in all Early and Later Neolithic groups from Central and Western Europe, H3 shows strong Western European affinities and is not detectable in Central Europe before the Middle Neolithic. While no strong differences in sub-haplogroup H variability among Iberian groups of different epochs could be detected, a clear shift between Central Europe´s Early and Middle Neolithic is recognizable.

Posted by bellbeakerblogger at 3:09 PM