A short article by Neil Curtis and Neil Wilken covers some of the highlights of the Scottish "Beakers and Bodies Project", which was an associate project of the British "Beaker People Project", previously blogged.   It is published in the British Archaeology magazine.  (article is linked below) 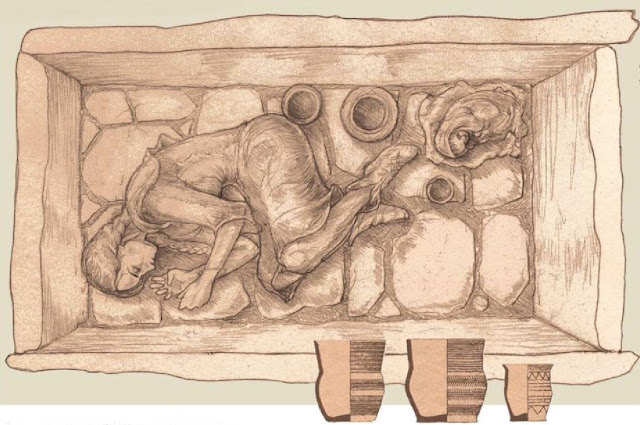 Northeast Scotland has a relatively high (or apparent) density of Beaker culture materials.  Its river valleys may have desirable to people wanting access to Ireland, the Netherlands and all of the North Sea.  Curtis and Wilken seem to speculate this might partly have been resource driven in combination with location.  In this article, they look at this region's funerary beakers.

Curtis and Wilken build on a theory by Alexandra and Ian Shepherd that the pottery decoration and styles reflect gender and age differences.  Aside from unique local beakers, Tall-Short Necked Beakers are associated with established, older men.  A more balanced Basic-S profile beaker is associated with women, and another with young adults, etc.  An exception is the squatty, short-lip beaker below, which is a local thing.

It also appears likely all funerary beakers in NE Scotland once contained white inlay paste, not unlike most of Europe.  Even if we had a time-machine and were able to ask people why they insisted on doing this, I doubt most could tell you.  I suspect that in its earliest form, white inlay on an iron oxide background was used to paint a schematic, allegorical expression of the underworld in the Beaker mind.  [previously]

As you can see in the first graphic, NE Scottish Beakerfolk appear to have often been buried in a gendered, East-West manner, similar to many of the Corded Ware.  As we look for ancient DNA in the months to come, it will be interesting if there is a genetic connection that is more direct between the two. 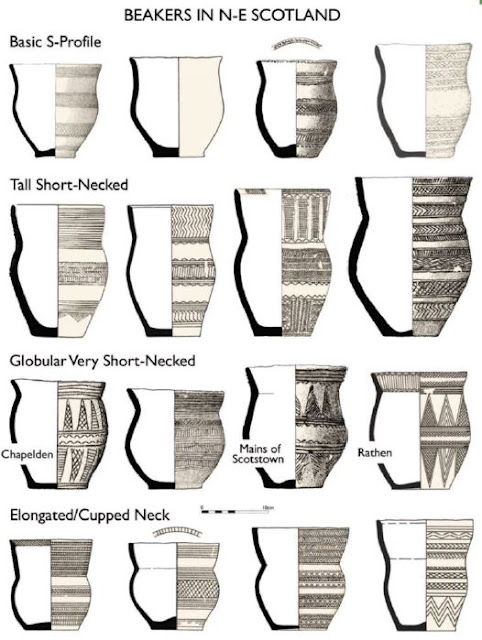