This new study by Cox, Ruff, Maier and Mathieson aims to rank the variables associated with predicted height, measured height (sitting and standing) and bone mineral density across the European ages.

The study shows two major shifts in genetic height predisposition.  The first is the transition between the Upper Paleolithic and the L/Mesolithic, in which genetic and measured height decrease dramatically.  There is a substantial rise in genetic/observed height in the post-Neolithic, again reflecting the impact of Steppe Ancestry (to a greater extent in the Northern latitudes).

There's some lessons here that may be predictive when it comes to the origins of the Beaker people.  Their height, body mass, brachycephaly, coloration and bone density would suggest a large portion of their ancestry came from a shadowy, northern latitude and a cold-stress climate.

See Allen's Rule and Bergmann's Rule (mentioned in this paper) 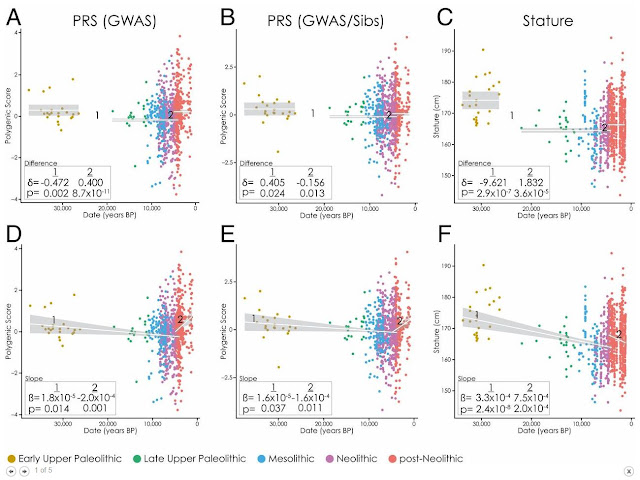 The relative contributions of genetics and environment to temporal and geographic variation in human height remain largely unknown. Ancient DNA has identified changes in genetic ancestry over time, but it is not clear whether those changes in ancestry are associated with changes in height. Here, we directly test whether changes over the past 38,000 y in European height predicted using DNA from 1,071 ancient individuals are consistent with changes observed in 1,159 skeletal remains from comparable populations. We show that the observed decrease in height between the Early Upper Paleolithic and the Mesolithic is qualitatively predicted by genetics. Similarly, both skeletal and genetic height remained constant between the Mesolithic and Neolithic and increased between the Neolithic and Bronze Age. Sitting height changes much less than standing height—consistent with genetic predictions—although genetics predicts a small post-Neolithic increase that is not observed in skeletal remains. Geographic variation in stature is also qualitatively consistent with genetic predictions, particularly with respect to latitude. Finally, we hypothesize that an observed decrease in genetic heel bone mineral density in the Neolithic reflects adaptation to the decreased mobility indicated by decreased femoral bending strength. This study provides a model for interpreting phenotypic changes predicted from ancient DNA and demonstrates how they can be combined with phenotypic measurements to understand the relative contribution of genetic and developmentally plastic responses to environmental change.