Why are so many ancient burials red?

The Red Ochre Tradition (ROT) is summarized in "The Geologic Model of Religion" by (Andrew Clifford 2012) starting on page 95.  While I don't subscribe to all of his hypotheses, it's good starting place for understanding the antiquity and continuity of this practice.

He describes it as a component of the human Inner Core Religion; ROT being the oldest material evidence for spiritual belief.  At least within the core Neolithic sphere, I think some circumstantial evidence may suggest a certain kind of red apotropaism is the main cause for its inclusion in those burials.

The most common surviving burial pigment is red ochre (iron oxide).  In the Mesolithic Ertebolle Culture, folks often had their heads covered with red ochre.  Is covering the head or the whole body intended to hide the deceased?

In Egyptian mythology, the extermination of the human race by the 'Eye of Ra' was thwarted by creating a concoction of beer and ochre and pouring the blood-like mixture on the ground to fool the eye. (Remler, 2010.  pg 51)  The use of ochre as a war paint is attested around the world for similar spiritual concerns.

In this Djumbulak kum burial, the red shroud over the face appears to have been dyed with Madder root.  Within the context of Greek mythology (Herodotus iv. 189), a madder-dyed cloak is emblematic of Athena's tasseled aegis.

The attributes of Athena are apotropaisms associated with those for warding off the evil eye.  They included the oculos, the gorgoneion, and the aegis, the last of which combines several apotropaic devices in a single garment (being golden tassles, a gorgoneion and a red color).  Athena's bright eyes (possibly blue) are also significant in a Mediterranean context.  (See also Sulis)  This is in contrast to the wild eyes of the Gorgons whose damning stare causes immediate death.

Above is a burial typical of many royal tombs in the Americas.  Cinnabar is also very common to burials beginning in the Mesolithic of Southeast Asia, Chinese Late Neolithic and the El Argar cultural remains of Bronze Age Spain. 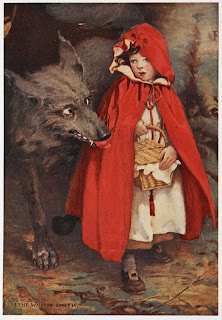 As hypothesized in Part 2, elder dye may be the source of a fairy tale red cloak.

This has a relevant meaning to pigments because it prevents any one source of red dye from having the exclusive apotropaic power against the damning stare of Gorgons or whatever.

"Why is Ochre Found in Some Graves" National Museum of Denmark


If at any moment the beliefs and rituals of the Ertebolle people seem two dimensional, a small baby buried in the wing of a swan helps us realize how real the pain of death was even for tough log boatsmen.
Posted by bellbeakerblogger at 10:40 AM
Email ThisBlogThis!Share to TwitterShare to FacebookShare to Pinterest