After a long wait, Valera and Evangelista's paper is openly available (linked at bottom).  I'll move back and forth between the paper and other things...

So quick background.  In the Atlantic Neolithic and beyond, you see certain iconography emphasizing power eyebrows and 'seeing' eyes in various expressions.  In some rock art you may have big eyes and eyebrows on a stick figure.  Some megalithic tombs have looking eyes and eyebrows scrawled on the rock.  These 'seeing' characters seem to be very widely distributed in the ancient world, from the Northern Pontic, the Middle East to Southern Europe.

There is deep Western Eurasian superstition of the 'evil eye' in the circum-Mediterranean zone which remains strong today.  When the historical period begins in the Middle East, anthropomorphic talismans or amulets with inlaid blue eyes or owl imagery are being used to protect the living and the dead from very bad things.  I would be comfortable with the assumption that the Southern Iberian idol tradition is one distinct variation of this wider and enduring superstition found throughout the Mediterranean and South Asia.

In Southern Iberia certain types of anthropomorphic ivories become increasingly naturalistic and male in the middle of the third millennium (this paper).  Many have lines across the face interpreted by Valera and Evangelista to be facial tattoos, although in some rock art depictions they look like cat whiskers or stylized facial hair IMO.  [See also]

I think a very satisfying case can be made that these lines represent the markings of an owl's face, The eyes of the owl do look 'soul penetrating' and the plumage around and below the eyes do look like many of these representations.  Like cornos, owl figures were commonly used in Roman Italy to combat the evil eye, and oddly enough, in non-Iberian Romance languages the 'streiga' (strix) is the word for the shape-shifting witch.*

The most populous owls of the ancient Mediterranean world might have been the Common Scops Owl (I believe literally called a boar owl in Basque maybe for its 'tusks'), which has a high flute hoot, and the Screech Owl that sounds like an old woman (or witch) screaming in the night. [example]  (I got to experience this in the form of a heart attack while sleeping in the woods one night)


Back to the paper:

Not to be confused by the title of this blog, these idols are largely a continuation of a long Neolithic religious tradition that is slowly maturing.  The very natural figures are included with the cremated collective remains of some people of Perdigoes and then at some point, and to a degree that I don't really understand, individual burials and beaker artifacts are sometimes present, mostly in the damaged upper layers or in certain quarters of the site.

Now having read the paper, one of the more interesting points is the apparent uniformity in the observant, male figures, and it seems the arms are closely held about the waist and carefully holding something that is not well defined, perhaps a club as tentatively described in the paper.  I've tried to guess at other possibilities to what the figure is holding, and my best guess is either a torch or an ornamented 'hueso largo', as illustrated in Maju's site linked above.

What I find especially interesting is that this period of artistic achievement and naturalism is followed by what Valera previously described as the almost 'iconoclastic' tendency of those that followed.  Few material things made by Beakers could be described as naturalistic art.  Those exceedingly few images that could pass (Swiss menhirs, a Millares sun bowl, or the Folkton Drums, for example), are more likely localized deviations due to cross-culture influence.  Really, I cannot think of any denominator of even a single thing in the Beaker sphere that isn't rigidly schematic, geometric or skewmorphic in its expression.  That alone, seems to be its denominator.

A previous post on work of Valera describes the cultural change that begins in this Late Neolithic period in this area and quickly accelerating into the Bronze Age [here].

You can see in Figure 4 below that these figures aren't just some random guy carved in ivory.  There is a specific pose where the individual is engaged in a specific action that people who lived at this time would recognize.  The hair is strange, it's a very long stylized hair that runs down the back. 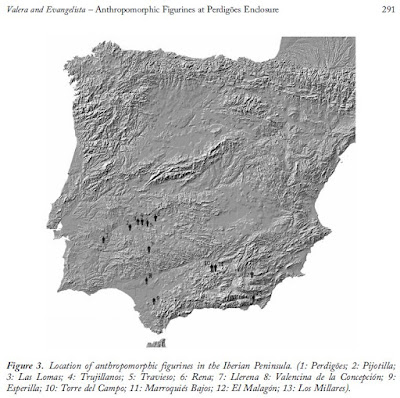 This paper focusses on a set of anthropomorphic figurines. It suggests that realistic human proportion
and canonical body posture were pursued in the carving of these objects as a means of expressing ideology, in a context of diversified forms of manipulation of bodies in funerary practices. It is argued that, against a background of predominantly schematic art, the more realistic and canonical anthropomorphic representation of the human body was used to communicate a set of ideological statements in a more controlled and immediate way, in a period of ontological and cosmological transition.

* Also horse-shoes in later times, and boar's tusks in earlier times.  By the way, if you dig a little deeper into Iberian plaque idols, phalanx idols, and the various types, clearly some are owls and this is probably true for the oculado images as well.

Email ThisBlogThis!Share to TwitterShare to FacebookShare to Pinterest
Labels: C