This is a short cist burial in Western Scotland dating to around 2,100 B.C., maybe slightly older.  It probably contained a young man buried with a brown-reddish tripartite food vessel and a knife.
It's a very short paper. [here]
The food vessel has accidental barley corn impressions from the time it was made.  As you can see in the picture below the bowl was tilted and the liquid content settled and evaporated in the corner of the bowl. 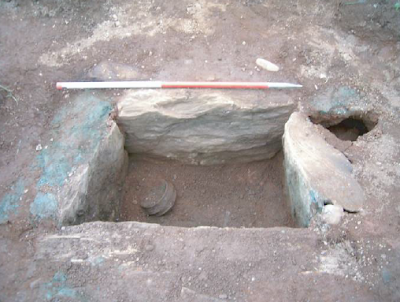 This grave was probably re-opened in prehistory.  The fragmentary bones were also piled in a corner and the archaeologists have good reason to believe that the remains were moved to make room for another burial that didn't happen.  The edges of the stones were sealed with orange-colored clay so that the cist might have formed a sort of container. 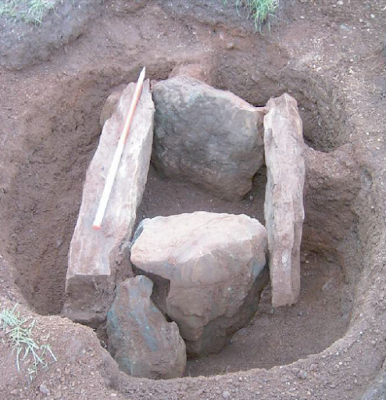 As a side note.  Another paper will be coming out soon apparently showing evidence of excarnation on some EBA remains in Britain...

"Important evidence of both excarnation and possible re-burial of previously buried human remains was recognised by the partially articulated state of a number of the burials (Lelong in press)."
This excarnation fetish by the archaeological world is a little weird IMHO.  There's zero evidence for excarnation in the EBA that stands to scrutiny and it just doesn't seem to fit circumstances, mindset or intent of EBA burials.  But anyhow I look forward to seeing...

I suppose I what's so interesting about this burial is how directly tied to Ireland it is.  Comment by Allison Sheridan in the paper..
A Short Cist Burial at Kilkeddan Farm, Campbeltown, Argyll & Bute
Dawn McLaren and Donald Wilson (2016) [Link]
Summary
AOC Archaeology Group undertook the excavation of a previously unknown
Bronze Age cist, located in a field close to Kilkeddan Farm, Argyll & Bute,
during September 2005 under the Historic Scotland call-off contract for human
remains. The cist was found to contain poorly surviving unburnt human skeletal
remains along with a finely decorated tripartite Food Vessel and a flint knife. The
incomplete and fragmentary condition of the skeleton suggests that the human
remains were disarticulated at the time of deposition. Radiocarbon dates obtained
from the human bone and associated charcoal confirms an early Bronze Age date
for the burial.
Food Vessel categories and description "Prehistoric Pottery" by Alex Gibson [here]
Posted by bellbeakerblogger at 10:22 AM