I've been wanting to cover the emergence of the Bronze Age Aegean a little closer as time permits.  This paper by Rahmstorf is a good place to get some context.  The paper is fairly short and readable, maybe twenty pages or less.

Here's a map of stone wristguards from the paper. 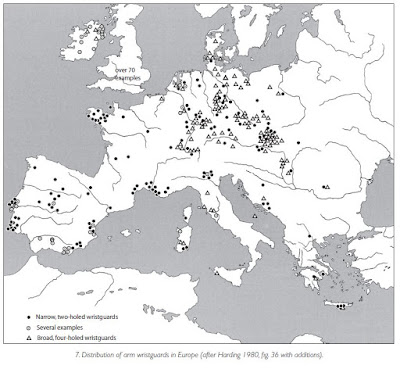 As we have been learning, the y-chromosomal DNA of Bell Beakers has belonged uniformly to the haplogroup R1b.  This is painting a picture of catastrophic change, certainly not annihilation, but a very clear super-cession of male lineages that is unfriendly to outsiders.  Please see [here].

This presents some challenges to understanding the phylo-geogarphy of the dominant lineage of Bell Beaker males.  This is because we are looking at a shotgun blast, not something that is clinal.  This can be very problematic when looking at the R1b distribution of Greece, in particular.  So lets jump of a cliff together and ask the question: "does Greek R1b come from Switzerland?" or hell, for that matter: "does Greek R1b come from the Estremadura?" 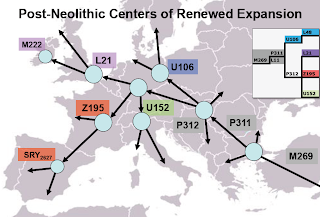 I wrote about this problem [in this post].  For that matter, can you completely discount [this]?  It might have seemed stupid for several weeks until Haak et al published the genome of man from Els Torcs!

The link is below...

The rise in complexity of the social-economic systems in the Aegean in the third millennium BC, starting around 2700 BC with Early Bronze Age II (EBA II), is most obvious. Near Eastern influence brought new innovations (like administrative storage procedures, metrology and complex metallurgical technologies) to the Aegean mainly via the Anatolian land-bridge, especially during the second part of the Aegean EBA II (c. 2550-2250 BC). In many parts of Europe, the contemporary Bell Beaker phenomenon showed some structural similarities, most obvious are the much intensified regional contacts.
To what extent could the Bell Beaker networks be compared to the contemporaneous Aegean-East Mediterranean spheres of interaction and what was the exchange between these ‘different worlds’ like? In the paper I would like to discuss some common characteristics by their chronological development and functional interpretation. In this context not only similarities but also differences shall be emphasized.


"The Bell Beaker Phenomenon and the interaction spheres of the Early Bronze Age East Mediterranean: similarities and differences" [Link]