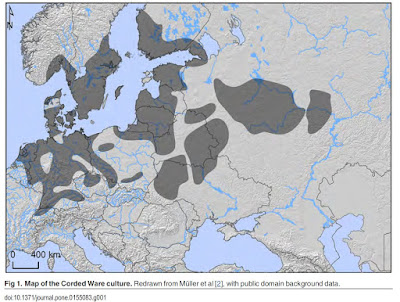 Abstract
Isotopic investigations of two cemetery populations from the Corded Ware Culture in southern
Germany reveal new information on the dating of these graves, human diet during this
period, and individual mobility. Corded Ware Culture was present across much of temperate
Europe ca. 2800–2200 cal. BC and is represented by distinctive artifacts and burial practices.
Corded Ware was strongly influenced by the Yamnaya Culture that arose in the
steppes of eastern Europe and western Eurasia after 3000 BC, as indicated by recent
aDNA research. However, the development of CW on different chronological and spatial
scales has to be evaluated. Examination of the CW burials from southern Germany supports
an argument for substantial human mobility in this period. Several burials from gravefields
and larger samples from two large cemeteries at Lauda-Königshofen "Wöllerspfad"
and at Bergheinfeld “Hühnerberg” contributed the human remains for our study of bone and
tooth enamel from the Corded Ware Culture. Our results suggest that Corded Ware groups
in this region at least were subsisting on a mix of plant and animal foods and were highly
mobile, especially the women. We interpret this as indicating a pattern of female exogamy,
involving different groups with differing economic strategies.
Posted by bellbeakerblogger at 5:34 PM