Here's a quick paper from 2011 on two infants buried in a Moroccan cave.  They belong to the same group of individuals that are on the burials page.  (If you're on a portable device, you'll need to look for the page drop down from the top)

Absolute dating has not yet been performed as of 2012, but radiocarbon and luminescence dating puts layer materials prior to 3200 B.C.  The individuals don't have positively associated artifacts, but do belong to a Chalcolithic layer (Morocco is much earlier than Spain) which includes beaker fragments and copper artifacts. 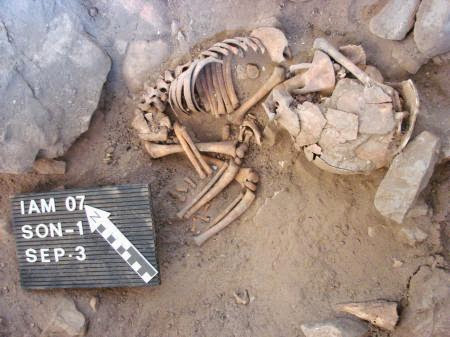 I haven't seen the pottery fragments, but I would be surprised if all materials are the same age and are 3200.  On the other hand, we should not be surprised to see proto-Beaker materials since Beaker pottery has shown itself stubbornly non-evolutionary.  (It's difficult to draw a straight line since most of the techniques are increasingly present from earliest times in Portugal.)
The other issue here is the copper point which is either from a later period or the earliest attested (I suspect).  Again though, the CMP tradition came from somewhere and Morocco was comfortably Chalcolithic.  That artifact is another thing to watch.
Overall, these individuals are probably indeed pre-Beaker or early Beaker.

There's another paper in the queue out there somewhere with absolute dating from a different Moroccan cave that should be out in several weeks.  It will be a later time period. I'll post as soon as I see it.

Study of the Chalcolithic Burial 2 and 3 of Ifri n'Amr ou Moussa (Morocco) Ben-Ncer, Bokbot, Amani, Ouachi Proceedings of the International Conference "Around the Petit-Chasseur Site" 2011

[Link]
Posted by bellbeakerblogger at 4:38 PM