This post is a gripe at a new paper (which I largely agree with) (*update 1* -I've changed my mind-I'll put in the next post) called "The Known Knowns and Known Unknowns" which briefly discusses the odd presence of mitochondrial "haplogroup H" among the people of the Mesolithic Portuguese shellmiddens.  I've finally reached the maximum vomit threshold with shellmidden DNA, so please bear with me.

The progress of ancient DNA research in Europe is beginning to show that these results are indeed outliers.  It was already a logical fallacy to suggest Haplogroup H was in an Iberian LGM refuge and remained there at an extremely high frequency but failed to expand to the rest of Europe and then, by-the-way, remained relatively hidden in the midst of fairly typical Neolithic farmer genomes within the region and finally went gang-busters to the Russian plain in the Early Bronze Age.  But looking closer at the "modern" results from the shellmiddens and a little background on the bones (that were probably licked by half the Portuguese population) the results become even more suspect.

This important study became confirmation for the retarded notion that modern Western Europeans are in large part maternally descended from indigenous, Mesolithic hunter-gatherers.

Chandler's results showed that Mesolithic Iberian maternal lineages were virtually indistinguishable from high frequency modern ones of Western Iberia and gave credence to the theory that Iberia was an important glacial refuge (for modern Europeans) during the Last Glacial Maxim.

I will offer a very respectful criticism here, especially since ten years have past, but this study becomes increasingly problematic the more you look at it and it is the foundation for so much wasted debate.  I will say that it is critical for those interested in the genetics of Western Europe to know the archaeology and conditions from these early studies.

This research used available remains excavated between 50 to 130 years ago.  No remains tested, as I understand, were excavated at least within the last thirty years.

Of the fifteen Mesolithic burial sites in Portugal, only half are "dated" and "of those" half are from shell middens.  Several are on the Rio Muge at the mouth of the Tagus, the Sado Valley and a single Atlantic site at Alentejo.  Most of these sites were excavated beginning more than a century ago, although intermittent work has continued in the last six decades. 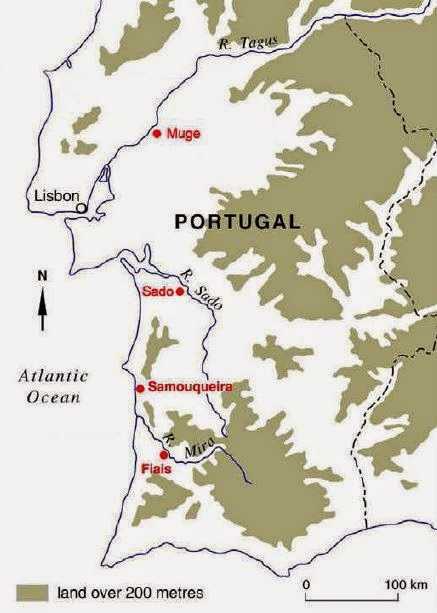 From these, Chandler describes most being from the Sado Valley, including Amoreiras (which I will pick on):


Let's start by looking at the materials taken from Cabeço da Amoreira [on the Sado, not similarly named site on the Muge].  Keep in mind the quotes you are reading are concerning other anthropological studies, not this DNA study, but will help you with context.


"The Muge shellmiddens were found 150 years ago in 1863 by Carlos Ribeiro. Since then, several projects in the area excavated the various sites at the archaeological complex of the Mesolithic Muge shellmiddens. The result was the recovery of more than 300 human skeletons. However, most of those burials have insoluble problems of associated materials, provenience, stratigraphy and chronology."  (Bicho et al, 2013)

Also this from Diniz:


"More recently, a 14C date from human bones put Amoreiras [in Alentejo] first (?) occupation in the beginning of the 6th millennium cal AC and our pottery analysis clearly show that beside Early Neolithic ceramic, Final Neolithic pottery is also present both recovered in the same artificial levels giving Amoreiras a chronological and cultural complexity not expected before." (Meiklejohn et al, 2009)

You will notice that Diniz refers to the levels within the middens as "artificial".  So in Amoreira [Alentejo] we have Early & Final Neolithic materials within a supposed Mesolithic level, which was man made to begin with and where intrusive burials continued for a great amount of time.

Properly stratifying an un-contextualized find within a midden depends highly on carbon dating to verify its "authenticity".  The majority of radio carbon dates from the middens have come from bone, which by the way, come from individuals whose diet consisted of at least 50% shellfish.

Given the delta between charcoal dates and bone dates in this area, its easy to lose confidence in early C14 dates of particular materials quickly, not that much confidence would be had in the bones of a brackish marine life eater.

Christopher Meiklejohn address the increasingly erratic radio dates of Mesolithic remains throughout the Portuguese middens: (Mesolithic Mescellany V20-9, 2009).  Keep this in mind as you read further.

Aside from the fact that Cardial folk also used the middens for burial (more clearly in Northeastern Iberia), the processing of the material itself may has left numerous problems for further scientific research.


"In the absence of commentary on the date and possible contamination, especially the issue of the use of paraffin in the preservation of the burials [1865], interpretation of this and the other direct dates on Sado midden burials should be made with considerable caution." (Meiklejohn)


Viability and Provenance of DNA extraction from Muge and Sado middens:

In general, the remains from Amoreira were neglected for anthropological study for an especially poor state of preservation (Cunha and Cardoso, 2001).   Because of this, they were contained in parafin, another issue.  The alkalinity of the middens is an issue.  Almost all of the material from Amoreira, Moita and Arruda were calcified in a dense matix.  (Cunha and Cardoso)

The remains from the Muge were spread across three museums, one of which caught on fire in 1974, causing multiple remains to become mixed.  (Cunha and Cardoso)  Some of the remains excavated at Amoreira were lost after excavtion, but some remains not from Amoreira somehow became associated with it.  Cunha and Cardoso also state (unrelated to the DNA study)


"Since some of the material lacked labels, some radiocarbon dates were performed in order to demonstrate their Mesolithic provenance (Cunha and Cardoso, 2002). The human bones retrieved at Amoreira were analised in this context."

Bear in mind that after the provenance of the materials being handled became questionable, the authenticity of the materials were reaffirmed through carbon dating.  They did exclude some skeletal material that came in a box labeled "Mesolithic" but later turned out to be skeletal material from the Iron Age that somehow became mixed in the Amoreira materials.  Those remains not calcified were easily removed from this association.


"Acetic acid seems to be efficient in removing the calcite, however, as secondary consequences are not fully known, we opted to study the material as it was."  (Cardoso in unrelated study)

**Update 2**  After re-reading Cardoso's comment it would appear that acetic acid was not used on remains after all, being as he said, the 'secondary consequenes not being fully known'.


There are other issues with these remains.  I don't want to come off like a chimpanzee on xanex, so I will leave it at that for others to study, but some of these early DNA studies from Southwest Europe and Italy need to looked at with a little more caution before we spend a lot of time debating European pre-history.

Posted by bellbeakerblogger at 1:16 PM