Alien Minorities in Crete and Cyprus

Again, impeccable timing.   Eurogenes has a paper on Cypriot M269 just now, I believe constituting about 10%~ of Cypriot y-chromosomes...I'll address at the end.

We might expect the full gamut of human interaction during the third millennium and every region and island is going to have a different set of circumstances and histories save one common denominator; a great number of cultures appear to be responding to the Beaker phenomenon.

It's probable, but not yet provable, that the Eastern Mediterranean had some kind of mild reaction to the Beaker advance around 2,500 B.C. and it is more than plausible that this involved small scale settlement in areas initially favorable for wind and surface currents, like Northeastern Crete or Western Cyprus.  These people wouldn't fall within the strict definition of a Bell Beaker as understood in Central Europe, but when we consider the cultural transformations and as the genetic situation becomes more clear, we may have people that are very similar or owe some portion of their ancestry to those changes pulsing through the continent.

So today I'll pick up with some familiar looking images.  A good place for some background is an article by Volker Heyd examining the primordial stew of the sub-Aegean Early Bronze Age in the shadow of the Bell Beaker.*  He also contributed to this beginning on page 47, which I am re-reading on continuous-loop.  I won't interpret or mis-interpret his positions or inklings, you can read for yourself, and some of it can be rather dense; but it's a subject that is rather novel at this point and I think if it continued to develop many things could be turned on the head.

At some point in the mid 3rd millennium, Crete is jolted by foreign elements in its North and East.  The native, majority neolithics in the center of the island appear to have been strongly conservative, however over time the melding of influxes sets a new national trajectory.  Like so many of the Bronze Age cultures of Europe, there seems to have been a turning point in which the native culture was electrified by the Beaker World System(1).  (Notice the body similarity of this CW pot as well)

This settlement of Eastern Crete is particularly interesting through the lens of modern y-chromosomal frequencies of the Lasithi Plateau compared the central part of the island.  We've already seen some breakout of Cretan y-trees; we also see this from the Lasithi plateau in maternal lineages [here] and [here] and if people from the West did indeed settle in Eastern Crete, it's entirely plausible they came from the southern Tyrrhenian sphere, itself crawling with South and Central European immigrants.

This attractive Mochlos (funerary?) jug also makes me wonder about a subtle meaning, something I've contemplated here.  Although the Mochlos funerary gold objects are quite different in the subject matter from Western Europe, the punched gold sheet work is not so different from that of the continent.  There are other things as well, like arrowheads.

I won't jump any further into this quicksand because the archaeology of Crete is more than I'd like to chew on, but it is interesting to zoom out and look at the bigger picture to see what's happening.
I tried finding picture of Cretan stone wristguards and can't spend too much time on it now, but I though I'd paste in this text from Heyd:


"It is a tempting thought, if the stone objects from the Tholos grave of Plantanos [tholoi here] in the Messara plain on Crete are also part of that connection, but one difficult to prove considering the long duration of the grave from EM I to MM. 41 [MM = Middle Minoan] Under those circumstances I would merely be inclined to regard the four-holed stone plate as a wristguard whereas for the majority of the two-holed plates at hand the mentioned restrictions of functional and cultural assignment apply."**


Apart from that, I've included some musings on Cyprus.  Sometime around or before 2,500 B.C., a copper-welding, cattle-and-plough people began to settle in a few places in Cyprus which propelled the island to the Philia Early Bronze Age.  They are identifiable by their red-slip burnished wares with white encrustation "Cypriot Red Polished Ware".

The foreign elements or people of the preforming Philia Culture are thought to derive from Red Slip Ware (RSW) folks from Cilicia (proto-Luwians?).
Now it's very easy to oversell superficial similarities.  Certainly the differences outnumber the similarities when doing a 1:1 comparison and the coastal Mediterranean also has a long history of communication and shared ancestry.  (It's not even clear where the initial pulses of the Beaker phenomenon originate) But a combination of things in the right order at the right time can at least raise our antennas.

The interesting thing is that Cypriot clay bodies don't change with Red Polished Ware, but the decoration does.  To me this can signal an intrusive male population and I think we see this and will eventually be able to prove this in European pottery. 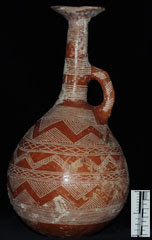 Similar Neolithic idol plaques are found in many places around the Mediterranean, Syria is the obvious choice closest in space and resemblance, but some are similar to Late Neolithic Western Iberia. 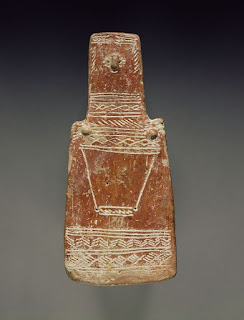 So going back to the Cypriot DNA study just out; their conclusion that Cypriot M269 is from Anatolia instead of Greek/Balkan.  This might support the idea that Cypriot Red Polished Ware is intrusive from Cilicia or Proto-Luwia and is part of a larger Red Slip Ware phenomenon punching its way up and down the coast of Anatolia.  The Cretan y-dna profiles, OTOH, look more Italian (U152?) and so the build-up of the Trojans and Hittites might be part of a differently inspired phenomenon than that of the Helladics and Cycladics, but nevertheless, it's all happening about the same time and has some interesting parallels..


(1)  The World System is more applicable to modern economics theory, but if you view the Beaker phenomenon as having a core ethnicity, then in some ways the resource exploration of Beakers could be viewed as a core nation, almost in a modern sense as lacking a center of gravity or national boundary.

*"Where West Meets the East: The Eastern Periphery of the Bell Beaker Phenomenon and Its Relation with the Aegean Early Bronze Age" Available here at "Aegeo-Balkan Prehistory"

*Published first in: Galanaki, I. et al. (eds.): Between the Aegean and Baltic Seas. Prehistory across Borders. Proceedings of the Internat. Conference "Bronze and Iron Age Interconnections and Contemporary Developments between the Aegean and the Regions of the Balkan Peninsula, Central and Northern Europe." University of Zagreb, 11-14 April 2005. Aegaeum 27: 91-104.


"Going back to the title of this contribution and, moreover, to the concern of this whole conference it should have become clear that marginal Bell Beaker elements of the mid-third millennium BC have reached the Aegean, whether or not one accepts the comb-stamp decorated sherds dating to EH II from Lerna and Eutresis, as well as the ‘wristguards’ from Crete – or relies on the Cetina finds from the Peloponnes alone. In no instance, though, could the phenomenon gain ground and trigger an independent Bell Beaker development. The incentives were too few, the ideology not persuasive enough, the distance to the nearest core too large and, in the case of Cetina, the arrival in southern Greece apparently ‘too late’. Therewith, only one side of the interrelation between the Bell Beaker phenomenon and the Aegean Early Bronze Age is recorded here. But there was no intention – nor the space – to trace and evaluate the finds and findings of Aegean provenance of the third millennium BC in the central Mediterranean distribution area of the Bell Beaker phenomenon. This applies primarily for Malta, Sicily, Apulia and also Dalmatia, but possibly even beyond that."

Ref:
"The Early Minoan Period:  The Settlements" , "The Tombs" Dartmouth

"The Prepalatial Cemeteries at Mochlos and Gournia and the House Tombs of..." Soles