63 Individuals in the Balkan Peninsula

Here's some interesting test results for 63 prehistoric individuals spanning Early Neolithic Starčevo Criş culture to the Late Bronze Age.  Hervella & co. have proposed a few interesting and plausible hypotheses based on the information.  It's open access. 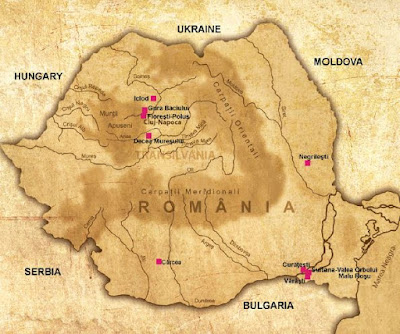 (Based on mtdna alone) the researchers seem to add weight to hypothesis that Linearbandkeramik and Cardium ethnicities emerged from the Pre-Ceramic, Proto-Sesklo Culture of Thessaly, itself probably having cultural roots somewhere in the neighborhood of Çatalhöyük.

There is stratospheric (58%) occurrence of haplogroup H by the Middle Neolithic (about 13 un-named haplotypes)  The only population with a frequency higher than this is SW Libyan Berbers.

There is at least one or two disruptions following the Early Neolithic with what may be additional migration events.  The Hervella researchers hypothesize that this is may be owed to additional farmer intrusions from the Near East and that these movements probably spread into Central Europe, changing the maternal haplogroup frequecy there. 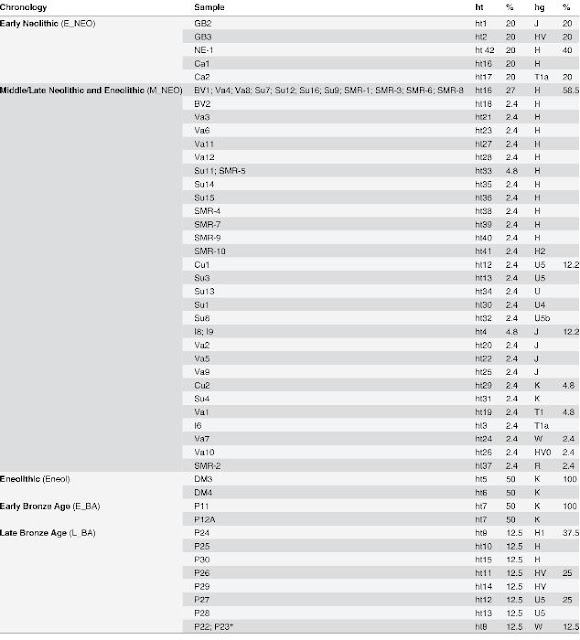 Finally, they offer an alternative hypothesis for the formation of Central European Bell Beaker maternal profiles in the Late Neolithic.


Several scenarios have been proposed to account for this genetic shift between Early/Middle and Late Neolithic in Central Europe, suggesting an influence of the CWC (Corded Ware culture) from the East and of the BBC (Bell Beaker culture) from the West in the Late Neolithic. The impact of people of the CWC culture, in turn massively influenced by a possible influx of populations from the East from the Yamnaya culture, has been proposed to be especially important [41]. While this idea is certainly possible, none of the models studied to date have taken into consideration another possible and obvious explanation, namely a new wave of Neolithic migration into Europe through the ‘traditional route’ of the Balkan Peninsula. This new wave of Neolithic migrations are represented by Vinča and Dudeşti cultures (5500–5000 BC), that trace their origin in North-West Anatolia on the basis of ceramics features [28]. The Boian, Zau and Gumelniţa cultures from Middle-Late Neolithic (M_NEO) from Romania are the direct continuation of this cultural complex; the M_NEO group from Romania displayed differences in haplotype (S5 Fig) and haplogroup distributions (S4 Fig) with the Middle Neolithic from Central Europe.

The hypothesized contribution of Middle Neolithic migrations from North-West Anatolia into the Balkan Peninsula and Central Europe may explain the position of the BBC (Late Neolithic in Central Europe), close to the M_NEO groups from Romania in the multivariate analysis (Figs 2 and 3).


The hypothesis put forth by Brotherton et al, 2013, is that the expansion of the BBC from the Iberian Peninsula might best explain the change in frequencies in continental Europe during the Late Neolithic.

As an alternate hypothesis, Hervella et al suggest that some Middle Neolithic Cultures of the Balkans, such as the Vinča culture, may represent later migrations of early copper-wielding, hyper-H Western Anatolians who then moved into the Balkans and possibly to Central Europe.  Assuming Central Europe was sufficiently shifted as apparent in the Balkans, it would then largely or partly explain a number of Beaker populations.

(And to clarify the last point, we are talking about the percentage of the maternal stock, not the impetus of the Bell Beaker Culture.  The question is the degree to which the earliest Beaker migrants mixed with the local Central European populations, which we already know was a lot.  Also, to what degree were those Central Europeans similar to Middle Neolithc Balkans)


The importance of the process of Neolithization for the genetic make-up of European populations has been hotly debated, with shifting hypotheses from a demic diffusion (DD) to a cultural diffusion (CD) model. In this regard, ancient DNA data from the Balkan Peninsula, which is an important source of information to assess the process of Neolithization in Europe, is however missing. In the present study we show genetic information on ancient populations of the South-East of Europe. We assessed mtDNA from ten sites from the current territory of Romania, spanning a time-period from the Early Neolithic to the Late Bronze Age. mtDNA data from Early Neolithic farmers of the Starčevo Criş culture in Romania (Cârcea, Gura Baciului and Negrileşti sites), confirm their genetic relationship with those of the LBK culture (Linienbandkeramik Kultur) in Central Europe, and they show little genetic continuity with modern European populations. On the other hand, populations of the Middle-Late Neolithic (Boian, Zau and Gumelniţa cultures), supposedly a second wave of Neolithic migration from Anatolia, had a much stronger effect on the genetic heritage of the European populations. In contrast, we find a smaller contribution of Late Bronze Age migrations to the genetic composition of Europeans. Based on these findings, we propose that permeation of mtDNA lineages from a second wave of Middle-Late Neolithic migration from North-West Anatolia into the Balkan Peninsula and Central Europe represent an important contribution to the genetic shift between Early and Late Neolithic populations in Europe, and consequently to the genetic make-up of modern European populations.

Posted by bellbeakerblogger at 11:42 AM
Email ThisBlogThis!Share to TwitterShare to FacebookShare to Pinterest