The Ferryman and dead Beakers

In this video Crecganford argues for the role of "The Ferryman" in PIE religion.  Although his argument is not about Bell Beakers, it's a good background for discussing Beaker religious beliefs and the interpretation of their archaeology.

Previously, I have argued that a solarboat was part of the Beaker death sequence.  I'll point to several lines of evidence from Beaker archaeology for a belief in a "ferryman of souls".  In fact, depending on how far you want to invest in this idea, some items of the Beaker grave package could have new and different interpretations for gendered burials of both Beaker and CWC peoples.

Using the comparative method, Crecganford argues the Ferryman as "a certain" old man that transports the dead from the realm of the living to the realm of the dead, probably across an underworld river.

Ok, having watched that...

There's a pretty decent chance that the golden lunulae, generally dated to the Beaker Period (as the one below), are highly stylized representations of solar boats.  Well, you be the judge.  Since so many of them are plow finds and being metal objects, it is their motif and uniformity that place them satisfyingly in the Beaker period.  These ornaments are never found on a dead body as ornamentation as you might expect for the worldly Beakers.  Curiously, they seem to have been hidden away, folded and reused; in some way like an object used for special occasions.

An interesting phenomenon is when we see solar crosses directly associated with these "solar boats".  If we were to suspect that Beakers spoke a language and practiced a religion of the Western Steppe, then these solar crosses help us intentify more clearly the old, bearded man who propels the solar boat (and Crecganford theorizes about this individual's lost identity in the video).

Remember we are talking of a reconstructed god deeper in time before the Beakers, but you may recognize a much later manifestation and recognize his crosses. 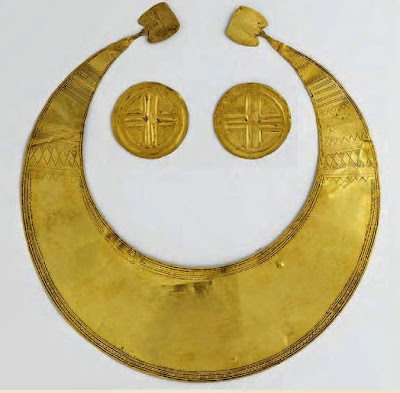 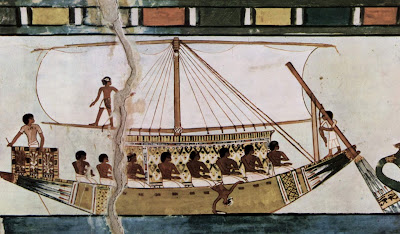 What about Bell Beaker grave offerings?

There has been an unchallenged assumption that Beaker offerings are for the occupants themselves.  They are part of an idealistic identity and therefore we assume these grave goods reflect ideals and personal needs.

These offerings are different from personal vestment, weapons and tools.  They are the accompanying gear, such as drink, meat and odd items.  And while most Beaker burials lack the diagnostic riches, most probably had some sort of offering, if only perishables.

But if Beakers did indeed believe in a ferryman, would these items be more convincingly interpreted as bribes or ferry payments?  Are the emblazoned, encrusted beakers containing barely and wheet beer, mead, wine, fermented milk and sometimes henbane gruits destined for the old, bearded poleman?  Would simple objects, like a chip of flint or a single bead be the primative equivalent to coinage?  Little bribes and tips for passage?   It's funny, because without knowing it, many of us have bribed him too.

Certainly Beakers were buried facing the rising sun.  We might interpret this as hope for a coming day or orientation towards a place we need to go.  It would seem aspirational, and so we should remember that the crossing of any river would require a west to east movement (towards the Sun).  This could be signifcant when we look at the Nebra Sky Disk in a moment.  This might change how we see CWC religion as well.  What if instead of viewing some sort of southern constellation, the Corded Ware people simply needed to cross a river from north to south?  Perhaps this was a vestige of an older homeland above the bend of a sacred river?  And speaking of the Corded Ware especially, it'd be interesting to look at the directionality of her daughter cultures and the procession of the Southern Cross, and especially Acruz. 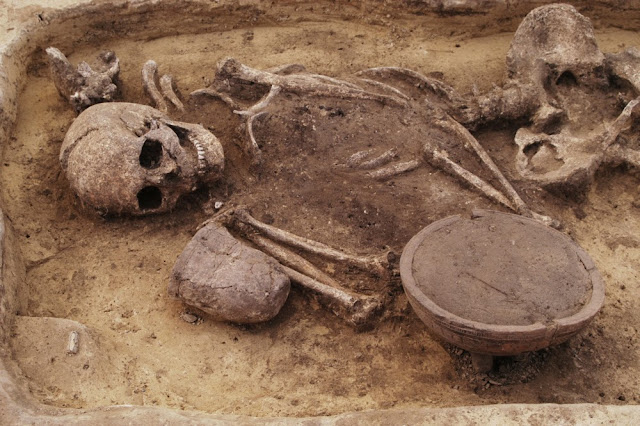 Finally an enduring question, what is the significance of the funerary beakers?  Obviously, their decoration followed a certain scheme and, in at least in the above grave, went so far to paint a ceramic red when the local clay didn't fit the color style.  The inlay paste can be made of several materials, apparently it just needs to be white.

My personal opinion at the moment can be seen below.  To be clear, I doubt your average Beaker farmer, who spent his entire life growing up above diverse geologies different from below, had any idea why beakers were styled a certain way.  If you were to interview the women who created these beakers, I'm sure they didn't know either.  They just learned all this from their elder women and so on.

But at one time, above a certain geology, either in SW Europe or the Steppe, a metaphor might have been obvious to people for a little while, if one ever existed at all.  Maybe they just thought it looked good, who the hell knows. 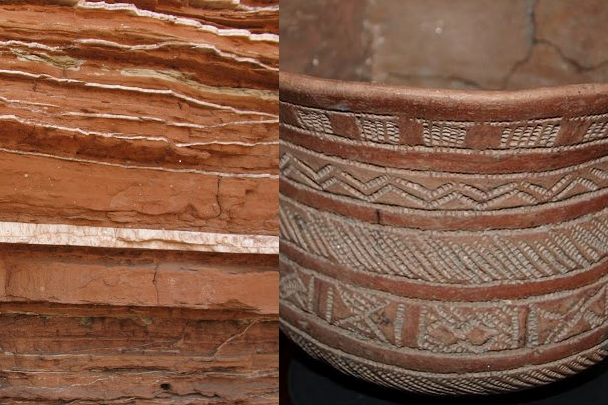 Without being too circular in my reasoning, I believe this is an important piece of the puzzle for understanding the Bell Beakers and the religious beliefs of successor cultures in Western Europe.

If the Ferryman is indeed part of an IE motif, then it is possibly one line of evidence, along with genetics, that point to Beakers being one of the first cultures in Europe with strong IE affinities.  We should bear in mind however, that other religions of this time had a solar ferryman, notably in Egypt.  So while a ferryman belief could be exclusively IE-derived, it could equally owe some or all of its character to North African beliefs, especially given the influence North African pottery had on funerary beakers.

An even more complex scenario might exist, and Crecganford eludes to this, where the solar boat or ferry motif among PIE's drew from a larger mileu of Near Eastern, and maybe directly Egyptian influence late in its history.

Let's move now to the apparently controversial Nebra Sky Disk.  I will do a separate post on the Sky Disk controversy this weekend, because I think the interpreation of many archaeologists is still correct and I'd like to add a few supporting arguments for the traditional interpretation.

It has been assigned to the much more sophisticated Unetice Culture in Saxony-Anhalt which supercedes the old Beaker culture.  You may see naked ladies in it, and there's all sorts of retarded interpretations, but I see a solar boat transitioning from firmament to firmament, from the realm of the moon to the realm of the sun.  Mythologically, the realm of the dead. 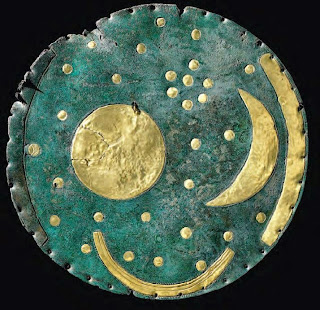 While I'm still considering the interpretation of some of the proposed constellations, I do feel very comfortable with the assignment of Lupus and Pleiades.  I think these assignments were very clever and very correct.  They also tell us something very important about the mythological associations with the solar boat and the disk.

Lupus hints at the identity or association with the solar boat and the judgement that awaits our transition to death.  Lupus stands ready to devour the condemed and his position in the disk is notable.

Below it is Pleiades, often subject to lunar and inner-planetary occulations (Mercury, Venus and Mars) because of its distance to the ecliptic.  Additionally, it was at heliacal rising in ancient times peaking around Halloween.  So it is easy to understand how in the comparative mythologies of the Greeks, Celts and Germans that the maidens are often associated with the Sun god and death.

Pleiades is important in when looking at what they mean for a dead person.  Taken from across the Western religions; they are present at judgement.  In the book of Revelations, they are held in the right hand of the Messiah.

They prepare and guide us on sea journeys.  They were transformed from maidens into birds (Freya's hen, or Atlas's doves).  They sift among the dead.  There are various myths in which one of the maiden's abandons the others (and I'm curious if this was a template for the devleopment of a separate motif in Germanic myth for the Valkyries). 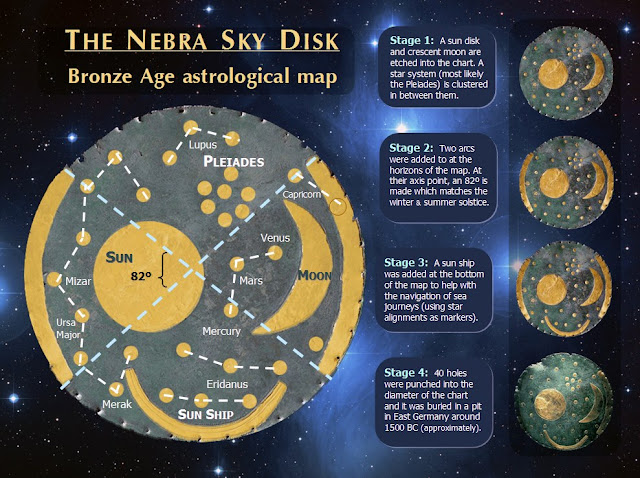 In any case, it's interesting that the boat is oriented towards the Sun.  I think this is consistent with a night journey through the underworld to heaven, aka hell.  (to be distinguished from actual hell, aka Earth 2022)

Posted by bellbeakerblogger at 3:52 PM
Email ThisBlogThis!Share to TwitterShare to FacebookShare to Pinterest