This is an important study of ancient domestic cattle by Scheu et al.  There's quite a few Taurine genomes here, and importantly, several from Iran, Syria and Turkey.

The paper is linked below, but you can also get some spreadsheets in the supplementary for actual sites and dates.  [here]

The most distant relationships are between those of Central Europe and Iran, the latter being in the vicinity of where domestication may have occurred.  The CE group includes the Early Neolithic Viesenhäuser Hof, Stuttgart at around 5,200 B.C. and Middle Neolithic Chasséen Culture from France.

The Cardial and Epi-Cardial cattle from France and Spain may be the product of early Cardial island-hopping from Anatolia.  The Western Cardial and Linerbandkeramik cattle are the most distant from the domestication event in time and space, and for haplotypes, the least diverse.

"The oldest (Neolithic) groups with the greatest geographical distance from each other, namely Iran and Central/Western Europe and Southern France, show the highest FST values (0.47 and 0.4, respectively). Smaller genetic distances are observed between more adjacent areas, such as between Iran and Western Anatolia and between Iran and Southeastern Europe (0.11 and 0.17, respectively)."

"Neolithic cattle from Iran yield the highest value for haplotype diversity in the whole
dataset (0.96). Haplotype diversity consistently decreases along the proposed two main Neolithisation routes, with the lowest values in remote areas, i.e. in Neolithic Central/
Western Europe and Southern France (0.22 and 0.00, respectively), while intermediate values are observed in between." 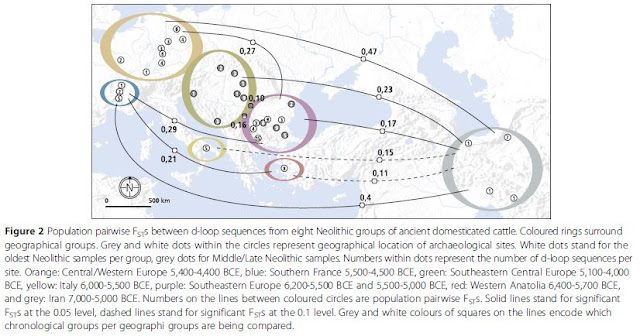 "The pattern of decreasing diversity in the direction of the Neolithic expansion and the correlation of genetic and geographical distances is considerably weaker in modern-day cattle breeds than in the Neolithic.  It is not clear yet to which extent human migrations
from the East as postulated for the Bronze Age [61] influenced the already existing cattle stock in Europe."

The last point made by the authors is critical.  This study only covers Neolithic longhorn cattle, bos taurus primagenus, at least in parts of Europe and the Near East.  In the Late Neolithic/Chalcolithic of Western Europe there is a major change in the morphology of cattle in many places that may contribute substantially to the genetics of modern Atlantic herds.

They found no evidence of maternal auroch introgression into Southern Italian breeds based on mitochondrial haplotypes.   Well, for one thing, it's there... Maybe not yet, maybe not visible by haplotypes, but I'd bet cold cash that it happened.  That will also be true for the exceedingly ugly Highland and Norwegian breeds and the stumpy auroch that inhabited those lands.

Uni-parental markers might tell you a few things in some populations, but in heavily domesticated and back-bred cattle it tells you jack-squat about population dynamics, especially bottlenecks. [see here]  At least this study is of ancient autosomal dna, so it's a good day.


So now that we have Middle Pleistocene genomes of fruit bats and iguanas, can we get a few Bell Beakers?!

Email ThisBlogThis!Share to TwitterShare to FacebookShare to Pinterest
Labels: cattle