The metadata in this study has been really difficult to navigate, so this is kind of an incomplete post and hopefully I'll be able to re-attack once some of the data (that we care about) crystallizes.

To start, one of the more interesting things about the Beakers in this study is that Kněževes - grave 8 was actually a woman.  It's difficult to say that it is her husband's mementos because she herself is oriented like a man.  I'm hoping I have the right graphic, but you can see below the sexing was different from the genetic result.  I'm guessing there was a question here and that's why this individual and the infants were chosen by the Czechs. (Don't quote me on this)

This doesn't necessarily mean she had a man identity or complex.  Certain items were associated with power in ancient societies, such as the queen who is depicted with the false beard, crook, flail and nemes (all things associated with male pharaonic power).  Clearly, certain regalia was buried with Beaker men who were importantly viewed in their society.  Jan Turek has written on this subject.


Bell Beaker individuals in this study lack carbon dates, this being because their pottery were historically satisfactory for placing them in a chronology.  But, the cemeteries at Augsburg, Osterhofen and Landau in Germany and Knezeves and Brandysek in the Czech Republic were subject to one of the earliest and largest isotope studies.  Price et al, 1997 (Table 7) found that Augsburg Beakers were around 15% first generation immigrants, Osterhofen around 38% and Landau around 44%. [also 2004]

These same cemeteries were also lumped into a dental study by Desideri and Besse (2010) which found population movement between groups.  Here's some of the sampled individuals from Table 1 of Allentoft et al.

If true, then that means that two of the Central Beakers where subclades can be discerned are U152/S28, not entirely surprising.  It's presence among Bashkirs is noteworthy however, especially given the stacks of ancient R1b coming out of the North Caspian.


*Ok, Correct map now, got a little careless.  Thanks to Krefter. 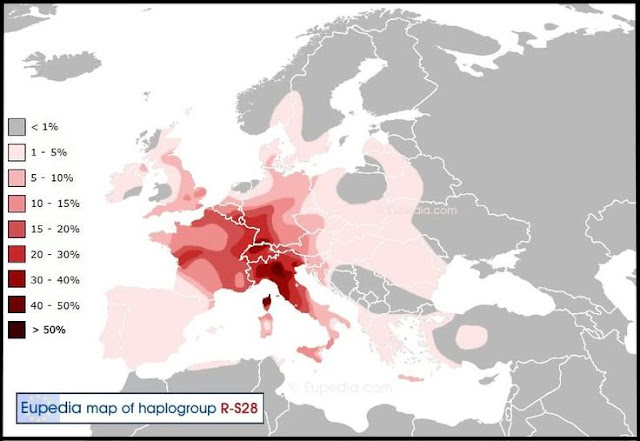 Supplementary
Posted by bellbeakerblogger at 11:01 AM
Email ThisBlogThis!Share to TwitterShare to FacebookShare to Pinterest