Here is an extremely rare find of tabby linen presented in "Offering with textile wrapping from a Bell Beaker sanctuary in Brodek u Prostějova, Czech Republic".


While the Czechs have been improving their highway system, a number of spectacular archaeological finds have surfaced, particularly of the Bell Beaker culture.  One of the motorway sites discovered was in Prostějov County, in which are very bizarre ritual center was discovered.  Two parallel rows of pits had 'offerings' of exotic and status items of the beaker culture including the beaker containers themselves.  These offerings appear to have been part of foundation rituals for the placement of gigantic wooden columns that would have supported some kind of ritual center.

Among the beaker globlets in these pits was a large amphora and two jugs.  The amphora was wrapped in this medium fine linen which was about 15 cm thread count.  I don't know what this comes out to in Imperial, but just note that the image below is highly magnified.

The thread is a spliced linen which the authors believe would have been white at the time and that the reddish hue is only from the iron content of the local soil.  In fact they appear to eliminate the possibility that the fabric was red-dyed based on their analysis. 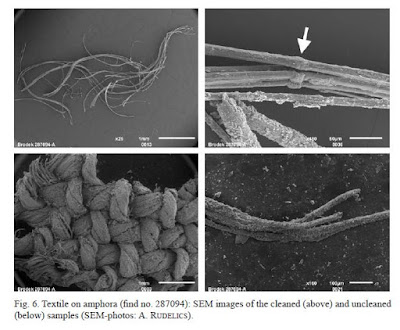 Generally the find seems congruent with other fabric counts and techniques in Central Europe from the Late Neolithic to the Bronze Age.  They make a compelling case that the wrapping of the amphora was part of a broader religious habit that persisted in Europe and the Near East up until the historical era and beyond.

"A group of four rectangular pits in front of a large building (possibly a sanctuary) supported by two rows of nine massive wooden posts excavated near the town Brodek u Prostějova (Prostějov County, Moravia, Czech Republic) delivered a number of vessels, wristguards and stone arrow heads dated to the Bell Beaker Culture (c. 2500–2200 BC). The goods appear to have been intentionally deposited, possibly as a ritual offering, as indicated by the lack of human remains in the pits and signs of intentional breakage of some objects. One of the vessels, an amphora, differed from the others (mainly Bell Beakers) in its coarser material and lack of ornament. Textile fragments adhering to the outside of the amphora indicate that it was wrapped in cloth at time of deposition. This wrapping could possibly have served as decorative element, enhancing the appearance of the – compared to the others – rather crude vessel. An alternative explanation could be wrapping as part of ritual activities – such as inferred for the common practice of wrapping of grave goods in Bronze and Iron Age burials.

The textile remains themselves, albeit fragmentary, are astonishingly well preserved. SEM analysis of the fibres identified the material as crudely processed flax, which exhibits incompletely separated fibres. The technique used for fibre processing was splicing, which is well known from contemporary sites in the Eastern Mediterranean and Ancient Egypt. Compared with other (rare) finds of Neolithic and Early Bronze Age textiles it is relatively fine."

Posted by bellbeakerblogger at 12:46 PM