Continuing profiles with a representative Bell Beaker man of Parma, Italy, working from "The Beaker Phenomenon and the Genetic Transformation of Northwest Europe" by Olalde et al, 2107.

In tomb 1 is a forty year old man (I2478) who was buried with a twenty-something woman (a true Italiano!).  His uniparental information is R1b1a1a2a1a2 - K1a2a. The dislocation of his remains suggested he was buried in an open space, meaning a wooden box. Beakers in this area are intrusive, perhaps destructive.

Now for a closer look, and a big triangle.

So far we have looked at "The Fare Frenchman" of the Rhône-Ouvèze group in Folcalquier, Southern France who has the highest East European steppe admixture of the French Beakers.  (Also, notice his beaker decoration)  Then there was the "Maritime Mama" on the Upper Rhine near Basal, Switzerland (also in France) and the "Mesetan Mama" of Central Spain, the two women lacking steppe admixture.

The culture of the Ciempozuelos Mesetaña foreshadow apparent connections and genesis of the Rhodano-Provençal group in Southern France (Lermercier), and maybe a few quirky connections of the Beakers of Northern Italy.

Now I understand that most will find the various subgroups are confusing, but most anyone would be confused! A picture of mixture will start to develop of this region and then we'll slowly zoom out over the panoply of Europe with more profiles.

From Historical Model of Settling and Spread of Bell Beaker Culture in the Mediterranean France.  Oliver Lemercier (Aix-en-Provence, France)  [regarding Beakers of Southern France]


"Their origin must be located in the south western area (iberic peninsula, maybe atlantic coast).  Standardized pots are spread from these sites towards the inland populations.  This first diffusion goes beyond the South East of France, following the Rhone river.  The development of a regional stylistic group, called "rhodano-provencal" like the "pyreneen" group, squares with a phase of acculturation of the local population under iberic influence.  As this acculturation goes, new elements from the north east area appear, showing that the south east area has become a relay in an important road for communication and exchanges.  The apparition of the 'barbele style' may be the result of the arrival of new people from Italy in the country (at work).  Both artifacts and sites data show that Bell Beaker culture should be considered, buring this first phase of apparition in the maditerranean and atlantic Europe, not as a simple diffusion of a fashion, a rite or even of objects, but as a cultural spread with its phases of exploration, settling and acculturation of the local populations.  From the iberic origin (Portugal?) of this first phenomenon to its spread until the far eastern parts of Europe, great lines of communication appear; they will permit numerous multipolar exchanges of ideas, artifacts and populations"

I snipped a map of these locations, Folcalquier, Parma and Balsal from Google.  It means most of nothing until the the river highways are considered.  Consider the approximate circumcenter of these three sites. 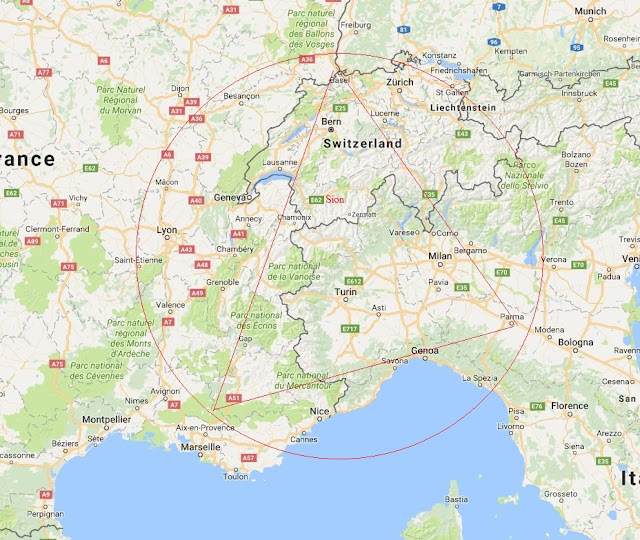 At this moment, I'll end this post with the references and the narratives of the Olalde paper.  I believe the Olalde and Reich authors are challenging us in this pre-print.

"Population discontinuity in northern Italy Our Beaker Complex individual from Parma is slightly shifted towards populations with steppe ancestry in the PCA (Fig 1b). We tested for symmetry between BB_Italy_Par and Remedello_CA3 (Table S2), a culture preceding the Beaker Complex in northern Italy. Several steppe-like populations such as EHG (Z=4.6) or Yamnaya_Samara (Z=3.9) share more alleles with BB_Italy_Par than with Remedello_CA, indicating that our Italian Beaker Complex individual harbors a steppe-related ancestry component not present in the previous Remedello culture."


"The site of Via Guidorossi at Parma, in the Po plain, was excavated in 2009 and corresponds to an advanced Bell Beaker period, dated to 2200–1930 years calBCE36. Tomb number 1 contained two skeletons, labelled individuals A (US-8) and B (US-9). Both were placed into an excavated structure of about 2.2 x 2.2 meters, with an opening
at the northeast corner. Individual A was a ~30-year-old woman placed in a south-north orientation, while individual B (I2478), the best preserved of both and the one successfully analysed in this study, was a 30-40-year-old male. This skeleton was placed with flexed legs on his left side, with his left arm also flexed and the right one extended. He was oriented north-south, with the head pointing north and the face looking to the easteast. Two Bell Beaker vessels, one decorated with incised triangles in a central band and the other undecorated, were placed at his feet, while two additional vessels were located close to the opening of the funerary structure. The decorated pottery is similar to objects found in other Bell Beaker Italian sites such as Rubiera (Reggio Emilia). Some lithic implements, including a remarkable knife, were found between the legs of individual B. The only similar lithic knife in a Bell Beaker context has been found at Fosso Conicchio near Viterbo. The radiocarbon date for individual B is:
I2478/Tomb1, ind B: 2200–1930 calBCE (3671±40 BP, LTL-5035A)"

"three more skeletons, labelled A (US-12), B (US-13) and C (U-14), all of them placed in flexed position. Individuals A and C were 60 and 50 year-old males, respectively, while individual B, who was lying between them and in inverted orientation (north-south), was a 15- to 18- year-old young female. Several decorated Bell Beaker vessels were located within this second grave. The bipolar orientation of the Guidorossi burials – south-north for females and north-south for males, all facing to the east – points to traditions found in central European Bell Beaker sites, such as those from lower Austria and Moravia.

1961 -2011: fifty years of discoveries and scientific studies around the site of Petit-Chasseur at Sion
Marie Besse, Curdy, Desideri, Gallay, Wible.
Proceedings of the International Conference "Around the Petit-Chasseur Site"  Sion, Switzerland, 2010 [Link]

Posted by bellbeakerblogger at 12:53 AM