This woman is one of the few Bell Beakers individual outside of Iberia without steppe admixture.  She's clearly a cultural Beaker, being someone who lived and communicated within a Beaker community close to Basal, Switzerland, within France.  Her mitogroup is H1+152, which would lend support to her Atlantic heritage.  She would have belonged to the Beaker system that dominated the Rhine.


Though I haven't had time to compare the types of beakers with the other graves, this one is notable for having a Maritime decoration, as seen below (hat tip Bernard for pointing out the mixed nature with cording, which you can see if you click on the image).  It's not beyond the realm of possibility that she was a native Iberian, so it will be interesting to see future analysis on how she clusters with other Neolithics.


And here she is out there in the orange with the other Iberians in relation to steppe admixture, which is not there.  She's also a fairly early Beaker if you split her radiocarbon range.

And her biography from "The Beaker Phenomenon and the Genetic Transformation of Northwest Europe" by Olalde et al, 2107


The Hégenheim site is located at the left bank of the Rhine river, a few kilometers from the town of Basel. It was the focus of an emergency excavation during the summer of 2004, when an individual Bell Beaker burial next to a Merovingian necropolis was uncovered23,24. The burial consists of an oval pit, north-south oriented, 1.80 meters long and 1.30 meters wide. The skeleton was positioned at the bottom of the pit, in lateral decubitus position on the right side, with flexed knees and elbows. The position indicates that the body is in its primary arrangement. There is suggestive evidence that the grave was covered by perishable material (plausibly a wooden structure). 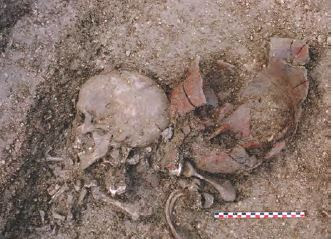 The grave goods are limited to a decorated vessel, placed in 205 a functional position, just behind the head. It is a large beaker of the S profile and flat-bottomed: 24 cm in height and 20 cm in maximum diameter. The external colour grades from reddish to brown; the vessel is polished and decorated both externally and internally. The latter decoration is restricted to the first two centimeters at the edge and consists of four parallel lines impressed with an S-twisted cord. The external decoration covers all of the beaker except for a short, one-and-a-half centimeter band below the edge. It consists of a series of ten strips alternated with oblique impressions with a comb, limited above and below by a line made with a cord. The decoration can be attributed to a mixed maritime style, considered to be an early stage of the Bell Beaker tradition.  The Hégenheim individual (13-Grave9, I1392) is an adult mature individual who is genetically female. The spatial orientation and the grave goods are consistent with a female Bell Beaker burial.


Posted by bellbeakerblogger at 4:54 PM