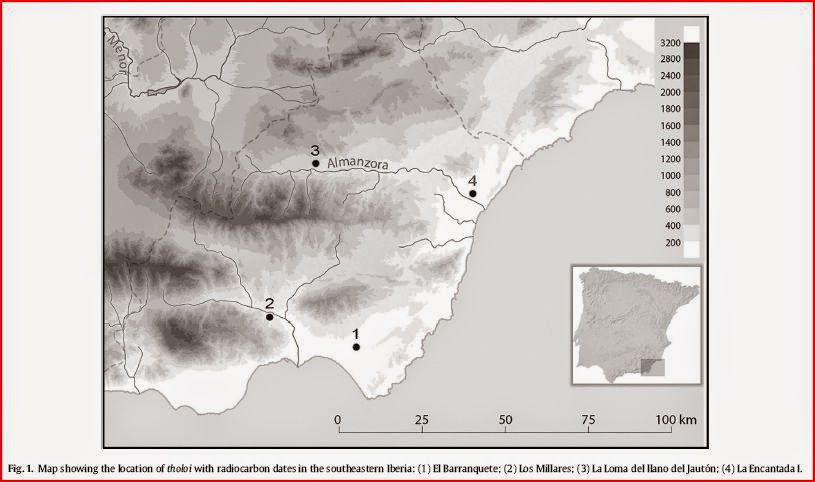 Tholus 11 at the El Barranquete necropolis (#1 pictured) demonstrates the coexistence and continuation of the Almeria Megalithic tradition much later than has been proven before (at least according to the authors).  The Tholos of tomb 11 was built hundreds of years after Tholoi were apparently discontinued, and with improved resolution in this region, it may turn out that rather than a sequential evolution of tradition,  that we actually have co-existing traditions of diverse ethnic groups over long periods of time.  Again, this was possible to the number and layering of the bodies.

This tomb, like other Megalithic tombs, appears to have had use and re-use periods.  At least one Beaker man and probably others in his family were buried there in later times.  Because the tomb is so well stratified, it would be nice to see some DNA out from the original Tholos burials, especially given that they were so late.  This could indicate 'who' the Tholos builders were.  I suspect that they were a distinct and late group of Near Easterners, or at least some of them were.

One last interesting note; with the number of individuals dated that the authors were able to obtain, they seem to suggest that individuals in these collective tombs were probably always buried whole, some apparently in the flexed template.  It was only decades or centuries later that people were disarticulated and re-organized to make room for new people.

This new understanding could really strain the view of how Megalithic people buried their dead and challenge the current notions of individuality ascribed to Megalithic peoples.  The current view is one that stresses the group and continuity.  However, like the emptying of the Tholos at Perdigoes, if they were simply shoveling out bones to make room for new flexed burials, then that seems to be a somewhat different worldview than previously thought.


For the first time on the southern Iberian Peninsula it is possible to determine the timescale and funerary span of a single megalithic grave, as all the Minimum Number of Individuals identified by anthropological study have been dated. Thirteen radiocarbon measurements are now available from Grave 11 at El Barranquete necropolis. Two Bayesian models have been built on the basis of archaeological interpretations of the mortuary depositions. The results stress the late construction of the monument, probably in 2452e2316 cal BC, and the short, but intensive ritual use during the Chalcolithic period of between three and nine generations. The funerary reuse of the monument is one the most remarkable features of this tomb. According to the Bayesian models, these ritual practices began in 2154e2022 cal BC and spans a long period of at least half a millennium. The results are also discussed in the context of the megalithic phenomenon on the southern Iberian Peninsula.

Posted by bellbeakerblogger at 5:44 PM