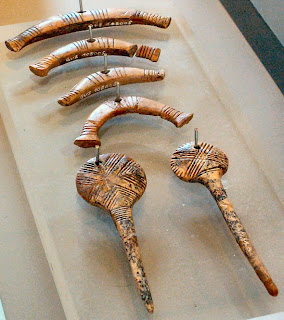 Boar's tusk pendants are sometimes found with Bell Beaker men across much of the central continent.  As Daniela Kern notes, they are considered by Christian Strahm to be one of the more diagnostic parts of the material package even though they are not exceedingly common.  In other words, while they appear only with a small number of burials; fashioned this way they are certainly a Beaker cultural expression within the Central and Eastern spheres.

Archaeologists have struggled to understand the purpose of these items which were usually found face down (frowning) around the collarbone or at the right hip/butt-cheek.  As you will read, several archaeologists viewed them as functional, perhaps as a toggle or clasp for hobbit clothes.  Others viewed them more as spiritual or medical amulets, noting how the banding and nocks resemble the roughly contemporary Meare Heath bow and the fact they are more often found with archers. 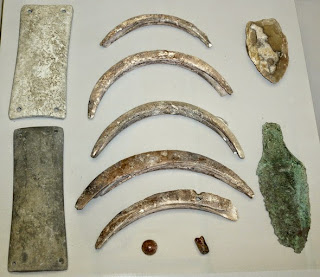 However, Kern has framed the facts in such a way to give a new or better understanding of the situation.  For one, she notes that there is an exclusionary relationship between boar's tusk pendants and bone toggles, such as the one below.  The bone toggles are more often plain but may be similarly perforated.  They also appear in a similar relation to the body, at the pectoral or over the hip.


While the two devices are exclusive to each other, the two exceptions she describes at Tödling and Osterhofen-Altenmarkt are situations in which the two are literally found on top of each other as 1+3 and 1+4 on the upper chest.  Therefore, she leads us to a situation where we are likely looking at items that are convincingly functional, functionally related, and probably slightly different in use.

Although she doesn't indicate a preference, after reading this paper I'd say that Andrew Fitzpatrick's original idea that these were in someway parts of a quiver seems to make the most sense of the various options.  Ordinarily a quiver is worn on the strong side of a Western archer behind the right hip so that he can draw arrows with his weak side.  If he was traveling some distance or riding a horse, he may have slung it over the back when not in use.

A quiver needs a ridged mouth so that barbed arrows can be drawn without snagging.  Looking at Wenceslas Hollar's drawing of a Bohemian quiver from the Renaissance Period, you'll notice that the mouth of the quiver is crescent shaped.  I wonder if a boar's tusk pendant was the frame-lip (visible) of the decorated bag?

You'll also notice how this moon-decorated quiver is slung.  The top sling attaches to the fat side (tooth side) of the bag mouth.  The bottom of the sling attaches to a midsection that may be similarly structured, in those cases where more that one tusk of differing sizes are found together.

Atlantic quivers for long arrows developed slightly different than those of Central Europe, being more of a tiny golf bag design.  The English archers also had a flap at the top to cover the fletching.  It was either Bosch or Fitzpatrick that suggested the toggle could have been the flap-toggle for the bag.

What I imagine at the closing of the grave is that the archer has one of two common, but not necessarily ridged, configurations for the quiver.  One is where the quiver is attached to his belt with the arrowheads pointing down.  One example of this would be the Barbing Bowman of Bavaria (although he did not have a boar's tusk).

The other configuration is similar to the Amesbury Archer where the toggle is before him and his arrowheads are behind him pointing the opposite direction.  This is more of a horizontal placement of the quiver, perhaps clasped beneath the right arm or possibly the bag was laid directly on top of him.  In this case the lip of the bag might be found in the position the tusks have often been found and maybe this is the reason for the position of most pendants.(?)

*In the case where several pendants are found together, then maybe in this case the additional ones form the structure of the bag, as in decorative external ribs.  If you look at the picture at the top (and I'm not sure these were found together, but assuming they were), then maybe they are similar to the fuse stations of a aircraft fuselage.  And then at the bottom of the bag, perhaps a softwood foot for the arrow points.

Forgot to add the link, here it is:

Posted by bellbeakerblogger at 11:55 AM