While Maglio's modified phylo-geography is intriguing, I disagree with his conclusion for roots in a LGM Iberian refuge.

But before I get to the points of interest, I have to say I'm surprised to see this Iberian refuge hypothesis continually sit up in the coffin.

It's noteworthy that the red dot in Fig. 7 is at the edge of Valdelugueros (La Brana), the site of two recent, controlled, stratified, Mesolithic hunter-gatherers.  They are the totality of their genealogies and their parents, grandparents, brothers, sisters and extended families would have heritable traits and haplotypes similar to them, not like peoples who live in this region now.

Maglio has re-arranged some of the phylo-geography in a novel way.  Most interesting is the shifting center of gravity for V88+ away from the Near East where it has usually been placed to the edge of Earth.  V88+ may be young enough that putting a hard and fast origin in the Middle East is a bit forced, especially when its immediate diversity doesn't clearly show this.

So, without getting into the details, I want to use Maglio's "Iberia-Chad" hypothesis and tweak it with an alternate interpretation using the last Saharan pump. 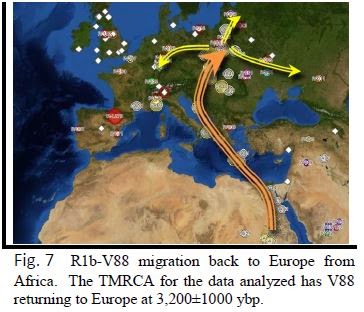 I think what Maglio is looking at is the genetic fray of the African Late Neolithic Subpluvial from which (I think) Beakers and African pastoralists descend.

I'll predict that with more subtropic canvassing we will begin to see a "grass fire pattern" around the Sahara (ie. Iberia, Sub-Sahara, Blue Nile, Levant) with strong founder effects towards super-lineages, but the continued presence of very low frequency, bottle-necked and ancestral lineages in the fray. (479*, 173*, P25*, L-278 (V88-), V88+, L51-, L51*)

As Maglio states in the L-278 paper, we should not be distracted by the super-clades of Europe (and Africa).  The reason for their accession is probably statistical and societal (on multiple levels).

This "grass fire effect" is somewhat visible now with the Sub-Sahara "under girded" by R1b in Mali, Mauritania, Niger, Nigeria, Chad, Cameroon and deeper into the Congo.  Although these are significantly V88+, it is critical to note that all these lineages are badly under-represented by independents and formal studies.

The problem with understanding the phylogeny of R1b in Africa is that vast regions previously inhabited by pastoralists are now completely uninhabited.  This is true in the Western Sahara, where the human population is essentially zero, which is why R1b constitutes 0% of male haplogroups.

Where there is R1b, its usually crowded in inbred oasies where M269 may make 1% with a much larger share to V88.

Only heavy canvassing and deep clade testing will reveal the structure of P297 and L-278 in the continent.

I will have have to study his process better, but reading various forums, it seems the age and spread of these lines is being challenged with deep SNP testing.


The status on the origins of haplogroup R1b remains split between the Iberian Peninsula prior to the Last Glacial Maximum (LGM) and a West Asian origin coinciding with the Neolithic expansion. The majority of focus on subgroup R1b-V88 has concentrated on African populations and neglected European and West Asian populations. To get a complete understanding of the back to Africa migration, a holistic network approach is necessary. Biogeographical Multilateration (BGM) illustrates directional flow as well as chronological and physical origins at the haplogroup level. The resulting phylogenetic relationships for R1b-V88 support an Iberian origin, a Mediterranean expansion and a Europe to Africa back migration.

The status on the roots of haplogroup R1b remains split between an Iberian origin prior
to the Last Glacial Maximum (LGM) and a West Asian origin coinciding with the Neolithic expansion. Existing methods generalize geographic patterns based on large population genetic frequency and diversity. Haplotype Aggregation delivers a coherent genetic record selection and Biogeographical Multilateration (BGM) illustrates directional flow as well as chronological and physical origins at the haplogroup level. The resulting phylogenetic relationships across multiple high level branches of R1b support an Iberian origin and a rapid Western Atlantic migration.

Posted by bellbeakerblogger at 9:48 PM