There are now quite a few Beaker 'graves' across Europe that lack a human body.  They are called graves because they have all of the accoutrements that might follow a person to the grave; yet there is no body, no ashes.

This phenomenon seems to be gaining the attention of archaeologists and a paper I previously discussed by Rojo-Guerra et al (2014) addresses the problem square on.  It has been variously proposed that these 'graves' may be very common as older sites are reconsidered.

It's important to note that these pits are not 'empty graves'.  There may be a drinking set, a quiver, a knife or two, a bead...just no human remains.  Also, I don't believe these bodiless burials are occurring within cemeteries, at least where other bodies are present.  So the Rojo-Guerra authors asked 'what was the purpose of these burials?'.


My hunch is that these pits with drinking gear and personal effects are the material instruments of contracts or covenants for the preliterate Beakers.  It might offer an explanation for the often intentionally broken beer containers and plates, many times half missing.  These covenants were materialized as instruments and monumentalized by piling stones or building mini alters atop.


For starters we can look to an example of Bronze Age covenant-marking in the Bible beginning with the patriarchs down to Joshua who monumentalized their covenants with God into the landscape.  This was the case at Gilgal where the remaining Israelite men were circumcised on their last leg of the journey leaving Egypt.  This was to serve as a reminder to the remaining men of the twelve Israelite tribes and their son's sons that they had entered a covenant with God through the process of circumcision.  This contract would be perpetually reaffirmed through the circumcision of each successive generation.

So we can peer directly into Bronze Age business practices and see that materializing and monumentalizing contracts was practiced at this time (at least in the Middle East).  This would have been especially important for preliterate, pre-state legal systems where the majority of legal code was devoted to contractual law, as was the case in Anglo-Saxon and Celtic tribal law.*

We also have in modern times the remnants of prehistoric social practices that may have roots in pre-state legal behaviors. 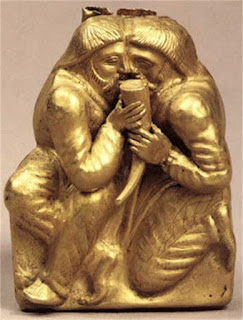 The first in the absolute broadest sense is the toast, which has many different forms in Eurasia.  Sometimes the glasses are chinked, sometimes the arms are inter-twined, sometimes the alcohol is taken together from one cup, or two share from a specially-made double cup.  To be clear, this goes far beyond the narrow bandwidth of the Bell Beakers; this is a pan-Eurasian drinking culture phenomenon, and it is probably much, much older than the 2nd millennium.

As we look to the artifacts from Hanácký, Suprasl or the Ambrona Valley, we see the occasion is more serious than a cheap get-together.  Serious and capable people came together for some reason; to pay homage to stronger septs, make religious offerings or conduct business.

The second is the curious single bead of amber or two that are found on some of these sites.  Hanácký, interestingly, is East-West oriented.  In Celtic law, as one example, an oath was taken by the Celtic god Mapanos (Apollo) or Lugus (Hermes, whose name may mean oath in Celtic via PIE).  (see Green, 1995) The oath taker also pledged his honesty on the fact that he would be swallowed by the Earth if telling lies.  It makes me wonder if this is a 'blood in, blood out' sort of agreement.  To put another way:  We dig an empty grave together, we make a covenant, we drink on it...   ... don't screw up!

The third is the shattering of pottery.  Whether it's to end bachelorhood in a Germanic Polterabend, turn the leaf in a Greek wedding, or end the year in Denmark, it is a widespread tradition across Eurasia that goes back to at least the Middle Neolithic in Europe.

The items in the pits don't seem substantial enough to be supplies or sustenance for those in the netherworld and in the case of Hanácký, we'd have to believe these people were very sentimental to memorialize so many lost souls at one location.  When these things are added together I'd lean slightly toward the idea that these empty graves are either homages toward higher ranked septs and lords or regular contractual agreements between two or more parties on court day as witnessed by others.


In this article we will discuss on a peculiar and interesting feature recently discovered in the archaeological record of Copper Age Bell Beakers in the Ambrona Valley (Soria, Spain), that is the existence of barrows which look like tombs but they were not. They even include valuable items (finely decorated pottery, gold jewellery) but no sign of human bones. This absence could not be explained by selective preservation of the materials, since those barrows are not located in acid soils, and faunal remains are usually found in other sites of the same area. We could interpret this special finds as the archaeological testimonies of eventual ceremonial activities, perhaps including commensality rituals (intentionally broken pots are found inside them), being the stone mound the commemoration in the landscape of those important events (a possible cenotaph evoking the death of someone important away from his hometown?) or places (the location of special features of the environment in their mythic geographies).

Posted by bellbeakerblogger at 12:12 AM
Email ThisBlogThis!Share to TwitterShare to FacebookShare to Pinterest