I've got the paper, read it, here it is.  Thanks to Eurogenes.

This paper examines the set of Plain Common Ware associated with Bell Beaker pottery at the San Blas Beaker settlement/fortress on the Guadiana.  The purpose of the authors isn't so much to understand the habits of San Blas as to create a model that can inform how prehistoric people mitigated food risk. 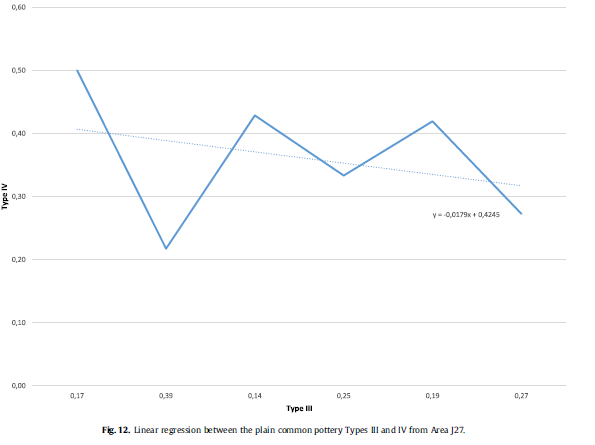 There could be many reasons why there is an apparent reduction in storage containers and an increase in tableware.  But if Bell Beakers were truly storing less food, then that could indicate a behavioral change, a security change or growing sophistication in the local economy, all suggested by the authors.  It's also possible that in the early days of the San Blas fortress, storing food in the homes behind the walls was important and became less important as time went on.

Might we see something similar in other Beaker settlements?

On a somewhat related note...  I've wondered before if it would be possible to find enough metrics to run a prehistoric culture through something like Gerhard Hofstede's Cultral Dimensions paradigm. You can see that post [here].

One of the key indicators for risk aversion in modern times is personal savings.  If you were able to quantify several aspects among prehistoric cultures, like storage, would there be enough data to make some determinations?

As one example, Materialistic cultures like America save little and engage in high risk activities and ventures, financially, professionally and personally.  East Asia is very risk adverse with low debt and high personal savings. These differences are probably driven by culture since the economic realities of East Asia are as diverse as Western Europe, yet Asians cluster together and Western Europeans cluster together.

So I realize there just isn't enough hard data for Bell Beakers, but I wonder where they would plot below?

AbstractThis paper addresses the plain common pottery associated with Beaker contexts in the Southwest of the Iberian Peninsula. The detailed systematic study focuses on the pottery assemblage provided by one of the region’s most important settlements, San Blas (Badajoz, Spain), while comparisons are made with other important sites in the study area. By means of the stratigraphic, typological and statistical analysis of the data, the main patterns of change in this material culture throughout the temporal sequence are identified and the historical explanatory factors are inferred. Specifically, during the second half of the 3rd millennium cal BC, an important change took place in the management of economic risk, which is materialised by a significant reduction in food storage and by the more immediate direct or indirect consumption of resources. We suggest that these patterns reflect a shift towards a short-term projection of the future, in a context with strong evidence of instability.

Posted by bellbeakerblogger at 8:45 PM
Email ThisBlogThis!Share to TwitterShare to FacebookShare to Pinterest