A Week of DNA, some fallout

In the ancient days of genetic genealogy (like ten years ago) it was hypothesized that the division of modern European haplogroups had formed during the Bell Beaker phase (R1b) in Western Europe, and the Corded Ware Culture (R1a) in Eastern Europe.

That was before a single ancient individual had been sequenced.  Now we sit befuddled watching unfold something what we thought was true is in fact uniformly true, weirdly uniform.  The resolution is increasing and here's a few implications from last week. 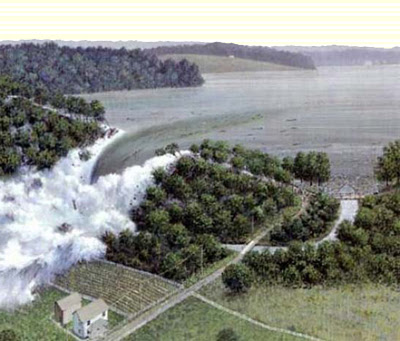 The Early Bronze Age Afanasievo are so far mostly or likely R1b M269, although one later Afanasievo man from Mongolia was Q-242  (Clemence Hollard, 2016)  possibly representing the shift to the Okunev era.

This should not be surprising since Afanasievo is basically Yamnaya in another place, but now that the Y-chromosomes are published, we can confirm that, yes, they are identical.  (See also Bernard's blog)

The major implication is illustrated by distance.  It is approximately 1,684mi (2709km) from Samara to Minusinsk, Russia.  Let's pretend a moment for the sake of argument, that M269 L151/P310 in the West has a more recent origin in the Caspian steppe:

Now I say "for the sake of argument" since everyone seems to go bananas on this subject.  But the powerful implication here is each of these places was indisputably transformed at the cusp of the Bronze Age by dairy herder migrants.  Each of these places has experienced incredible male biased gene-flow, which is why we have the spectrum we have, yet all having youthful sub-clades.  And it just so happens that the people of the Minusinsk Basin can be shown (almost empirically) to originate in the Samara region of Russia at about the same time as the beginning of the Beaker phenomenon.

Now it could be that the genetic origins of the proto-Beakers is clarified very soon, but I have a feeling that the plot will only thicken.  That is unless it is shown that Protruding Foot Beakers west of the Rhine were all L51, then we'll have some kind of complicated Ruckstrom.

The other implication is that the means to confidently travel great distance becomes an unavoidable issue in the forefront.  Before jumping to conclusions, however, let me caution that the formation of the Beaker Culture is more complicated that a map with arrows pointing in different directions.  The Beaker Culture is a unique international animal and it will continue to puzzle for a while.

A new paper on Baltic Corded Ware shows are all R1a, which was apparently uniform (again recently in Poland) across the Corded Ware horizon and its derived cultures.  The surprising uniformity across many different cemetaries suggests a social structure similar to the Beaker Culture and its descendant cultures.

This article last week by Ann Gibbons, "Thousands of horsemen may have swept into Bronze Age Europe, transforming the local population" is the latest volley concerning the disparity of uni-parental lineages in Europe.

This is not a new issue, and despite new analysis from ancient DNA, the situation hasn't changed.  The question is the mechanism for the paternal change. One explanation may be elite sex bias, as can be demonstrated in Mexico from a new paper: DNAeXplained blog.

Only two lineages are sequenced, but they look to me like they could be out of the Gulf area.

A number of genomes from the Scythian and Sarmatian cultures were published Eurogenes again
and again.  It appears that a massive transition happened in the steppe away from the Yamnaya/Afanaseivo type population toward one more CWC/Androvono/Scythian type.


Expect more cracks in the dam.

Posted by bellbeakerblogger at 11:57 AM
Email ThisBlogThis!Share to TwitterShare to FacebookShare to Pinterest